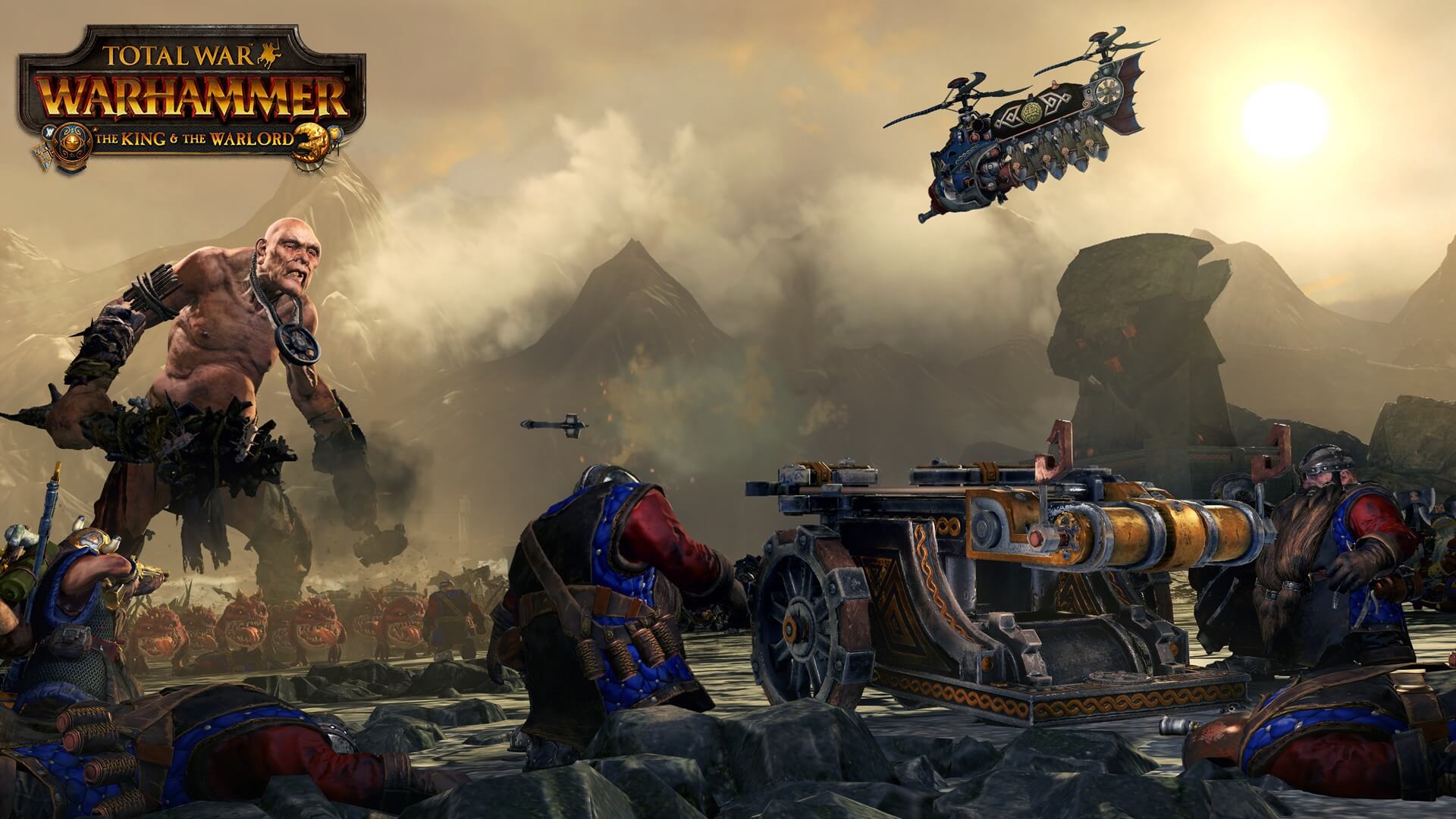 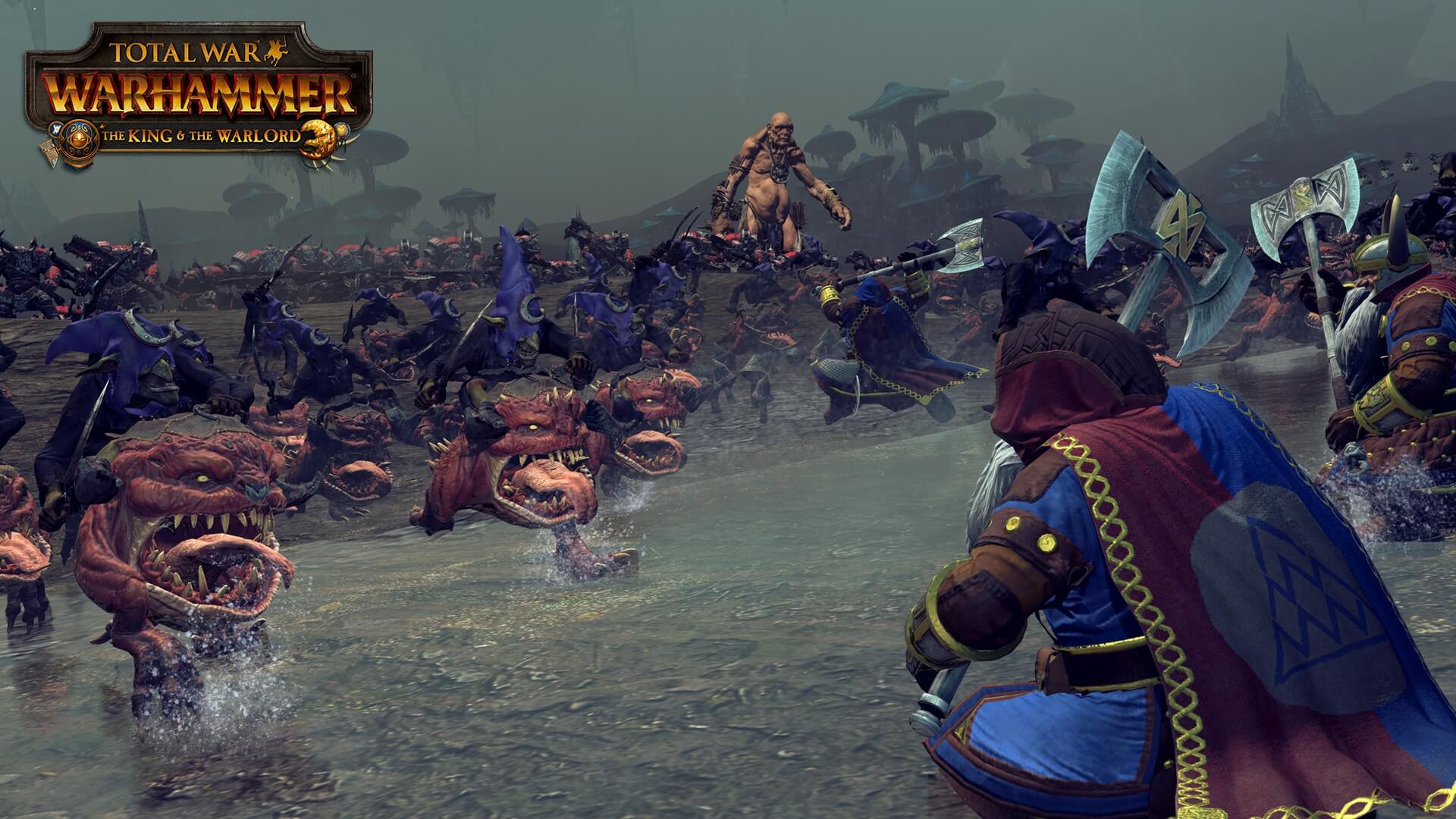 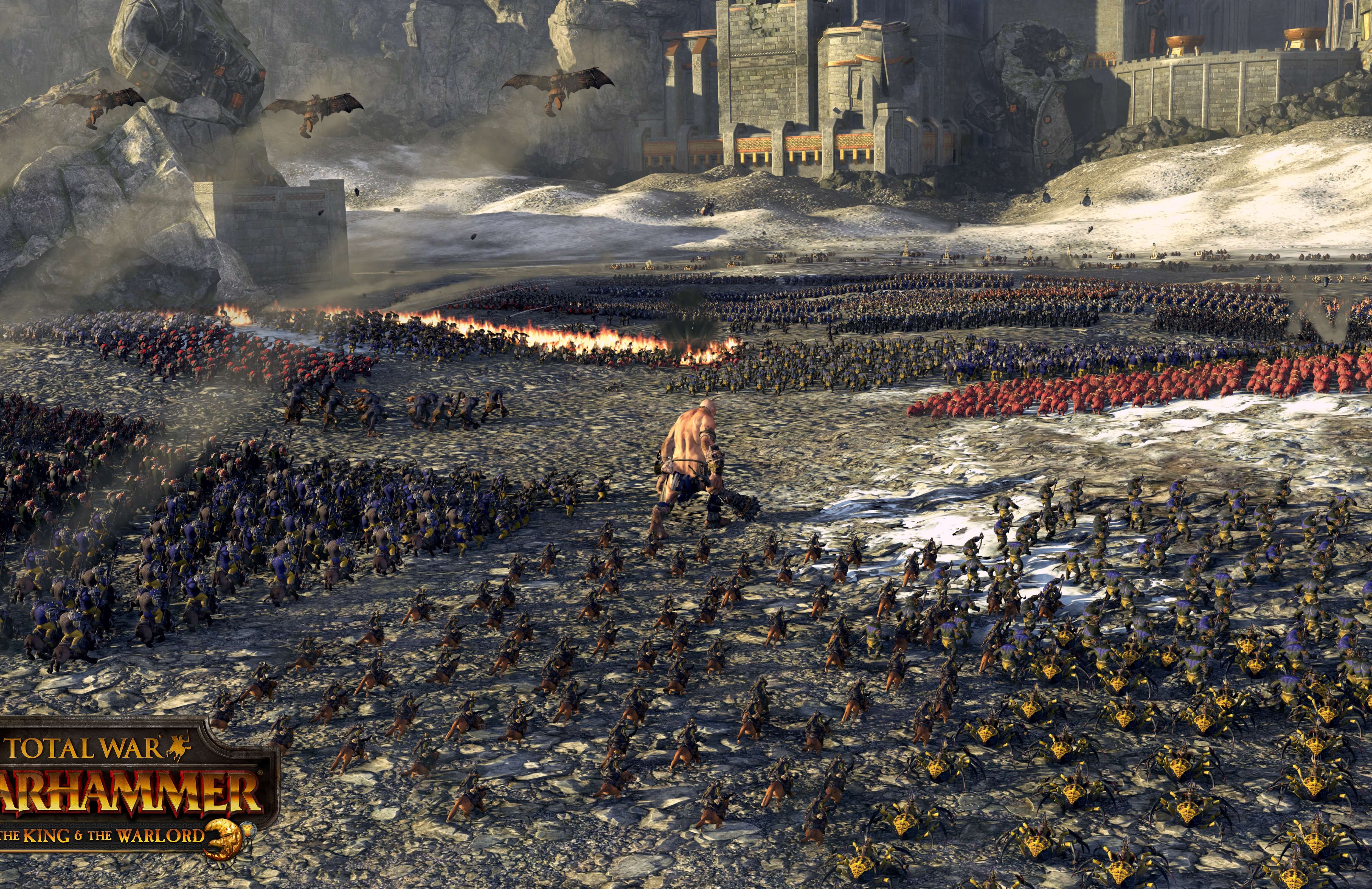 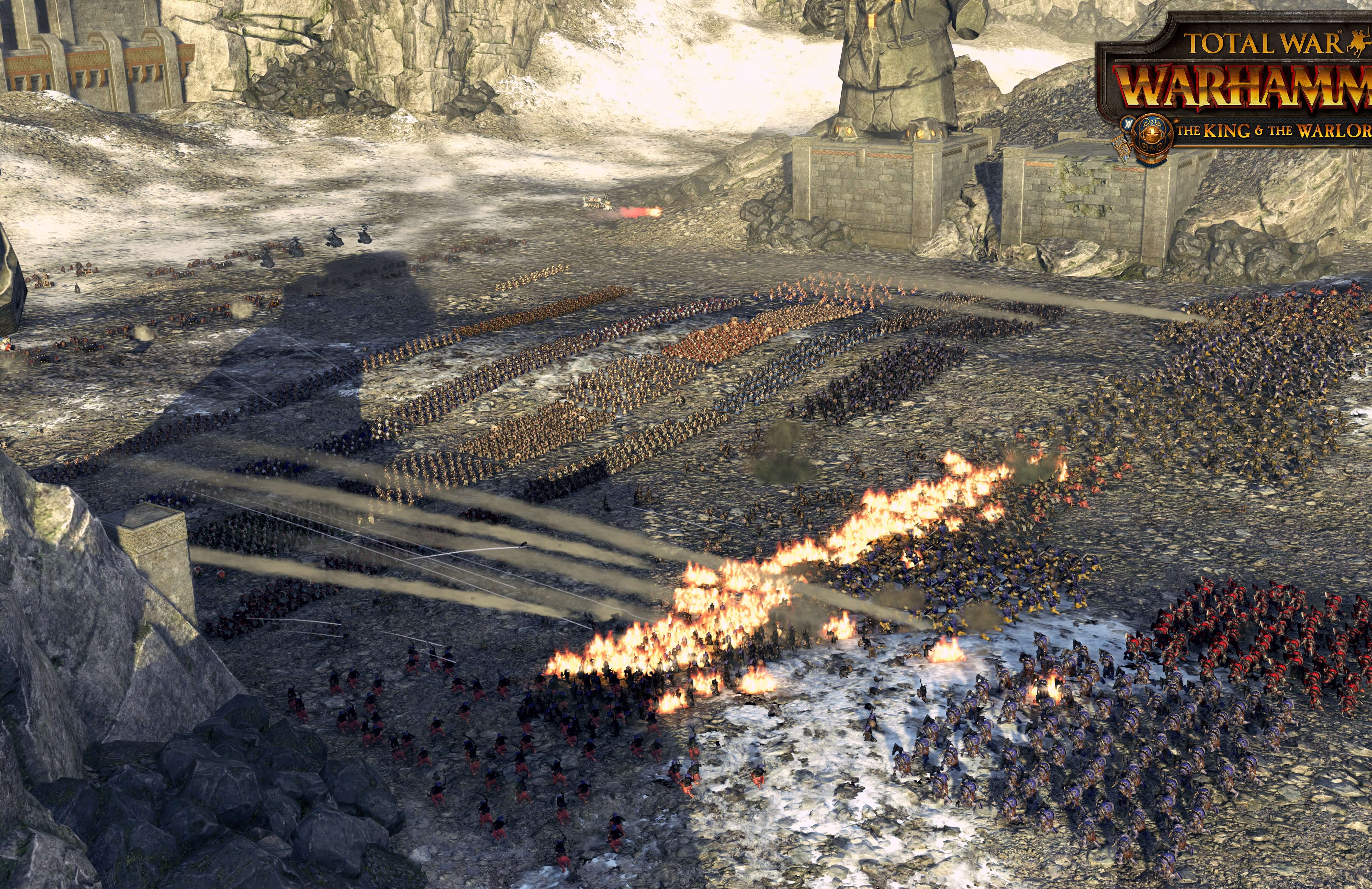 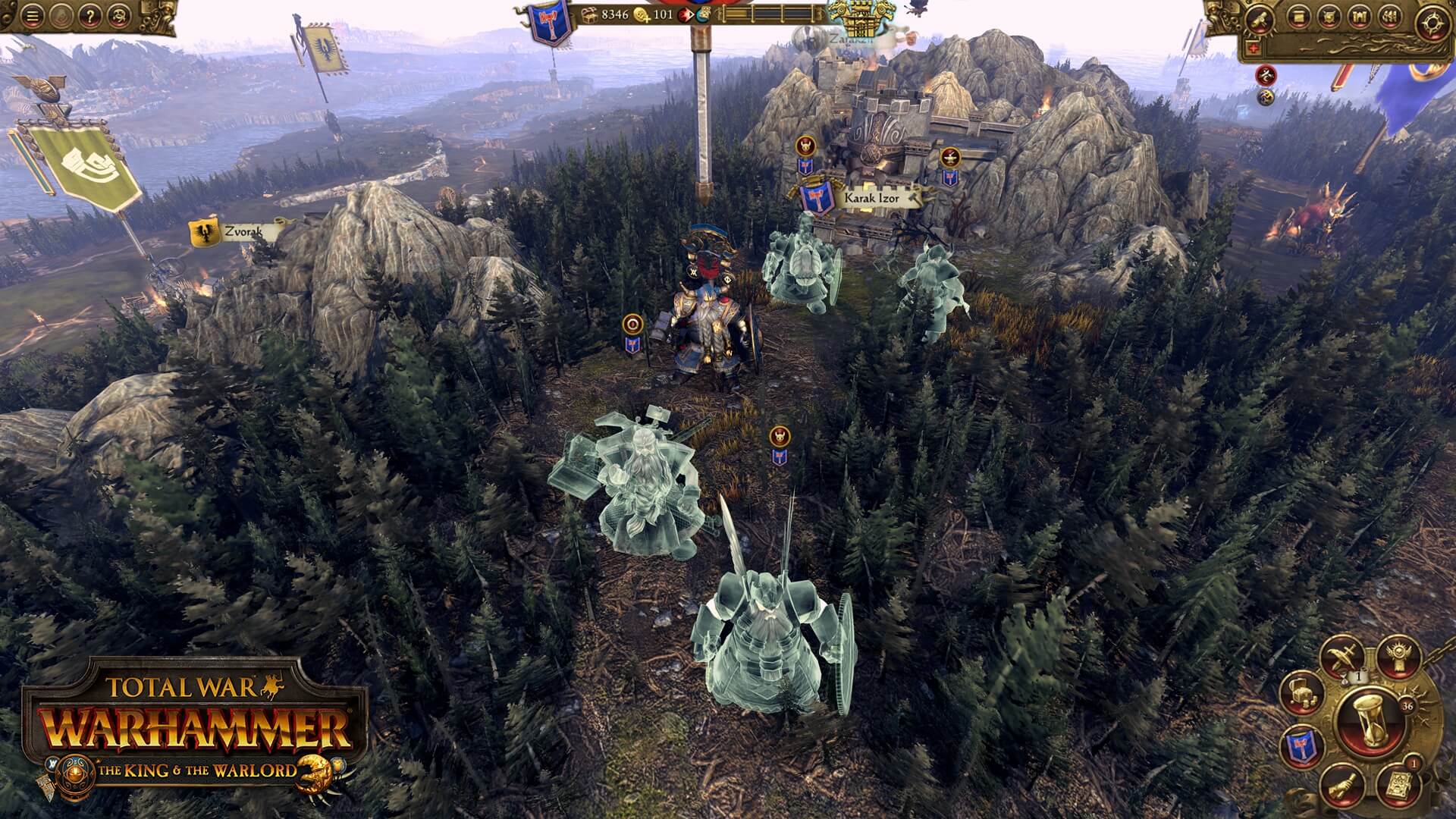 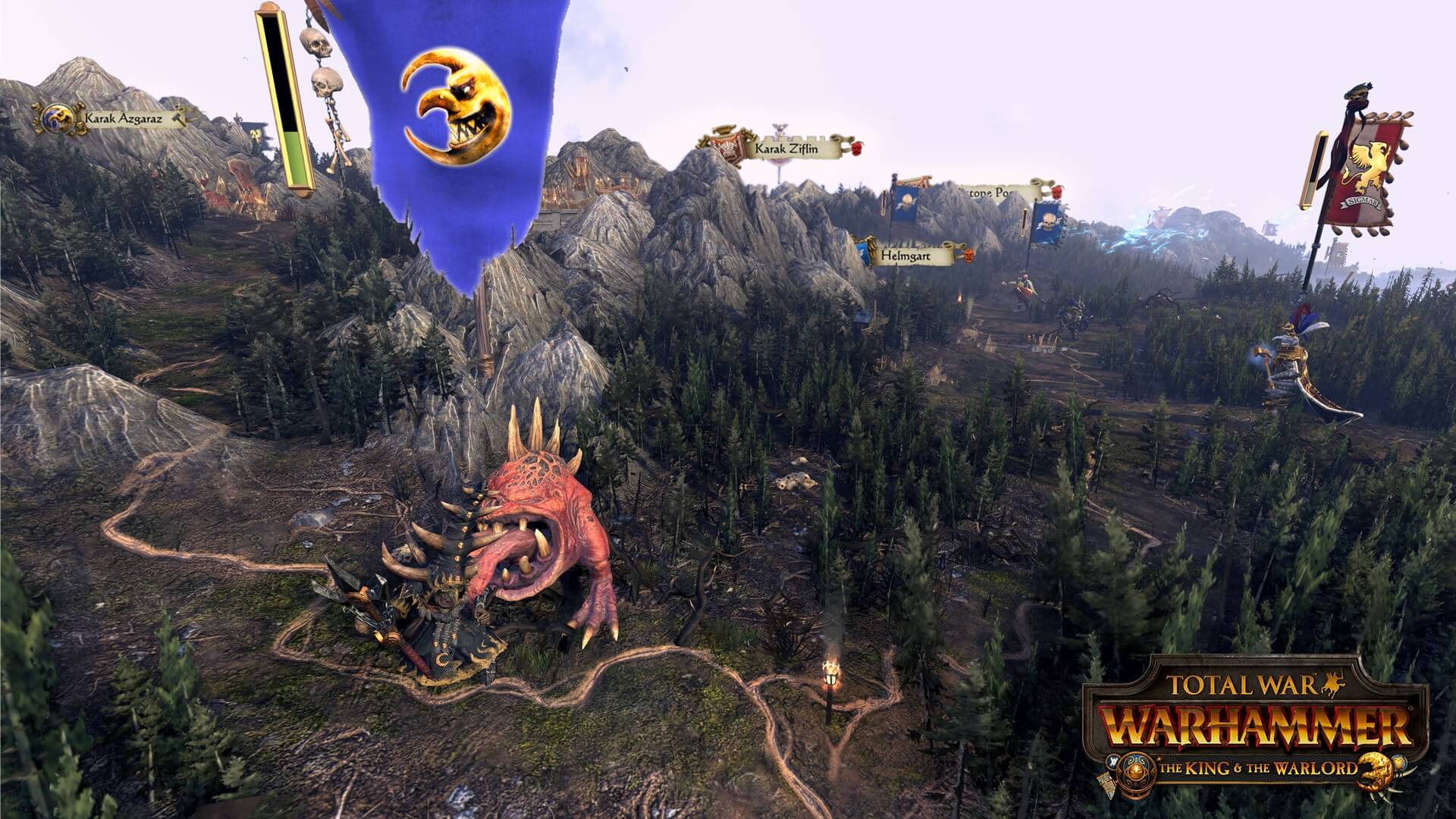 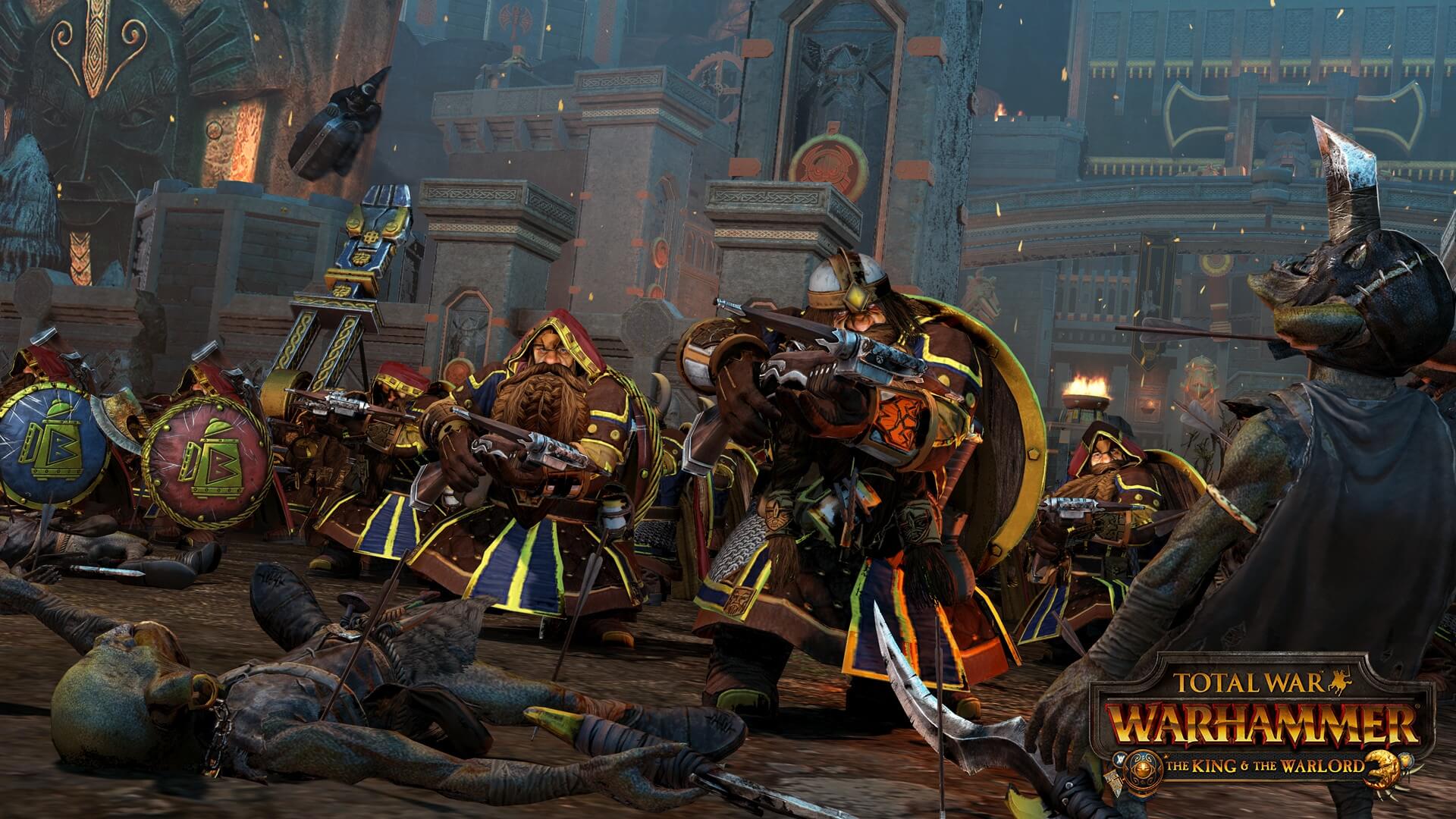 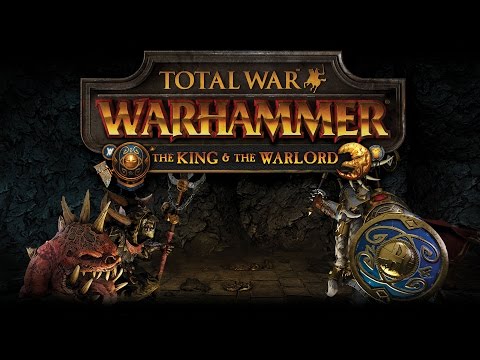 The time is nigh for Clan Angrund to reclaim Karak Eight Peaks from the Grobi despoilers! Belegar Ironhammer, clan leader and direct descendant of King Lunn, the last Dwarf to rule the ancestral hold, has inherited a bitter legacy of hatred and resentment. Even now he marshals his throng, making ready to strike out from Karak Izor. With the spirits of his fabled ancestors returned to fight by his side, Belegar will see his oaths fulfilled, and pass into legend himself.

Meanwhile Skarsnik, the self-proclaimed Night-Goblin warlord of Karak Eight Peaks, has taken leave of the hold. On a squig-hunting excursion in the Grey Mountains east of Brettonia, he operates from his base at Karak Azgaraz when word reaches him of Belegar’s intent. Worse still, the tricksy Goblins minding Karak Eight Peaks have taken the hold in defiance of Skarsnik’s iron will. Intolerable, sneaky, mutinous gits!

Two legends, then: both hell-bent on claiming the ancient Dwarf-Hold for themselves. Their destinies entwined, The King and the Warlord must face one another in a final, desperate battle to determine the true ruler of Karak Eight Peaks.

Ancestral heir of Karak Eight Peaks, King Belegar has a terrible and glorious destiny to fulfil. He has sworn an oath to reclaim the fallen Dwarf Hold from the Greenskin usurpers, despite the mountainous odds he faces.

Karak Eight Peaks represents more than Belegar’s birthright however. In terms of prestige and wealth it is second only to Karaz-a-Karak itself, and if Belegar can reclaim it in the name of Clan Angrund, he will gain access to the ancestral tombs and the rich trove of ancient and powerful rune-weapons which lies within…

Belegar begins the Grand Campaign with ownership of the walled settlement of Karak Izor in Border Princes territory.

When chosen to lead a Grand Campaign, Belegar begins play with the spirits of his Ancestors as his companion Heroes. King Lunn The Ironhammer (Thane), Halkenhaf Stonebeard (Thane), Dramar Hammerfist (Master Engineer) and Throni Ironbrow (Runesmith) are Ethereal Heroes, with all the benefits the Ethereal trait provides.

Belegar gains early access to the new Dwarf Rangers through the Ranger Outpost building. He also has the Siege Attacker trait, enabling him to attack walled cities without building siege equipment first. Until he captures Karak Eight Peaks however, Belegar suffers increased unit upkeep costs to his army.

Belegar may embark on quests to attain his two legendary items, The Shield of Defiance, and the powerful ancestral rune-weapon The Hammer of Angrund.

Skarsnik, Warlord of The Eight Peaks

Skarsnik is the chieftain of the Crooked Moon Tribe, and is widely acknowledged as the most powerful Night Goblin in the World’s Edge Mountains. This reputation was earned through devious machinations, relentless spite, and a wholesale brutality rare even among his pernicious race.

A vicious melee fighter in his own right, what makes him truly formidable is his favoured pet, the Giant Cave Squig Gobbla. The beast’s colossal teeth and voracious appetite make it a horrifying spectacle on the battlefield; to Gobbla, enemy units are as much a perambulating smorgasboard as a physical foe.

Skarsnik can only recruit Orcs in Karak Eight Peaks however, which he must first recapture from mutinous elements of his tribe.

Skarsnik may embark upon a quest for his legendary weapon, Skarsnik’s Prodder. This vicious, halberd-style weapon is capable of unleashing an area-affect burst of powerful magic missiles.

Dwarfen Runelords are among the most skilled practitioners of the Runic Arts. As they lead their armies into battle, they call upon the power of these runes to invigorate friendly units and hinder their foes. Runelords also have access to a new mount; at level 6, they may unlock and ride The Anvil of Doom into battle. This unique chariot empowers the Runelord’s runic abilities and increases his damage resistance.

Spiteful, conniving and capricious, Night Goblin Warbosses can unlock unique skills which enhance the capabilities of Goblin, Night Goblin and Squig units, and imbue their entire army with poison attacks. At level 12, they can be mounted on Great Cave Squigs, providing the Warboss with greater damage resistance, speed and attack power.

Found in the caves deep beneath the World’s Edge Mountains, Squigs are improbable beasts. Part fungus and part flesh with spheroid bodies and a hopping gait, one might view them from a distance as comical. In close proximity however, they are anything but. As their beady eyes fasten on a target, they bound forward pell-mell, opening their gaping maws to reveal row upon row of dagger-like teeth. Prodded into battle by their Night Goblin herders, they make a swift and vicious anti-infantry force.

It takes a particularly unhinged individual to leap atop a Squig and ride it into battle. Fortunately, this is a defining characteristic of Night Goblins. Goaded onward by their squawking, cackling riders, such Squigs are driven at breakneck speed – swifter than their unsaddled counterparts – and consequently strike with renewed ferocity.

Nobody skulks like a Goblin, and the Nasty Skulkers are the very skulkiest. Armed with razor-sharp daggers, they sneak deep into the field before a battle and lie in wait. When the time is right, they leap out and strike, causing lethal armour piercing damage before scurrying away under a confounding cloud of smoke. It’s all too easy to dismiss the average goblin as a spineless wretch, but when a Nasty Skulker springs from nowhere to land on your shoulders, it’s enough to challenge your assumptions… should you survive the encounter.

The long-range eyes and ears of a Dwarf Throng, Rangers are accustomed to operating alone, often deep in enemy territory. Expert crossbowmen, they make superb ambushers – waiting patiently for the enemy to manoeuvre into their firing lines before letting fly with a cloud of thudding bolts. Should the enemy draw close, they are well-drilled melee combatants too, especially when armed with Great Weapons.

Ranged/melee, fast, Vanguard Deployment, can Stalk Eternal vengeance-seekers for the destruction of their master’s fabled brewery, these veteran warriors often arrive unannounced before a battle to bear grim tidings, before joining the Throng for the fight ahead. They are peerless Rangers in their own right, though the unit never travels without the fortifying power of Bugman’s most potent brews. Such liquid fortification can transform their fighting abilities.

Tried and true, many clans still employ the Bolt Thrower, a war machine the Dwarfs have used since the days of the Ancestor Gods. Essentially oversized crossbows, they are accurate and reliable, hurling massive, razor-sharp bolts capable of piercing even the toughest armour.

If built by Clan Angrund, the benefits are as follows:

- Level 3 marks the recovery of the Ancestor Tombs, and supplies Ancestor Weapons for military units in nearby provinces, imbuing them with magical attacks. - Level 3 also ramps up unit experience and public order bonuses.

If built by The Crooked Moon Tribe, the benefits are as follows:

- Level 1 focuses on making Karak Eight Peaks unassailable, as The Tribe expects Clan Angrund to attempt to retake it. This confers a massive siege holdout time bonus and zero attrition suffered during sieges.

- Level 2 confers Obedience bonuses to the region and enhances unit experience for Goblins.

These are elite units – legendary within the annals of the Old World – whose statistics are much-improved over those of their standard counterparts. They can be unlocked for recruitment when the Lord under your command has attained the sufficient skill level, and are instantly recruited from the special Regiments of Renown recruitment menu into his army. In this respect they differ from standard units, which spend at least one turn in the recruitment queue.

Alongside enhanced stats and top-tier (level 9) veterancy, each Regiment of Renown also has one or more special abilities its standard-roster counterpart does not.