The Shadow & The Blade is the latest Legendary Lords Pack for Total War: WARHAMMER II. Introducing Malus Darkblade and Deathmaster Snikch both with their own objectives, mechanics, units and playstyle, 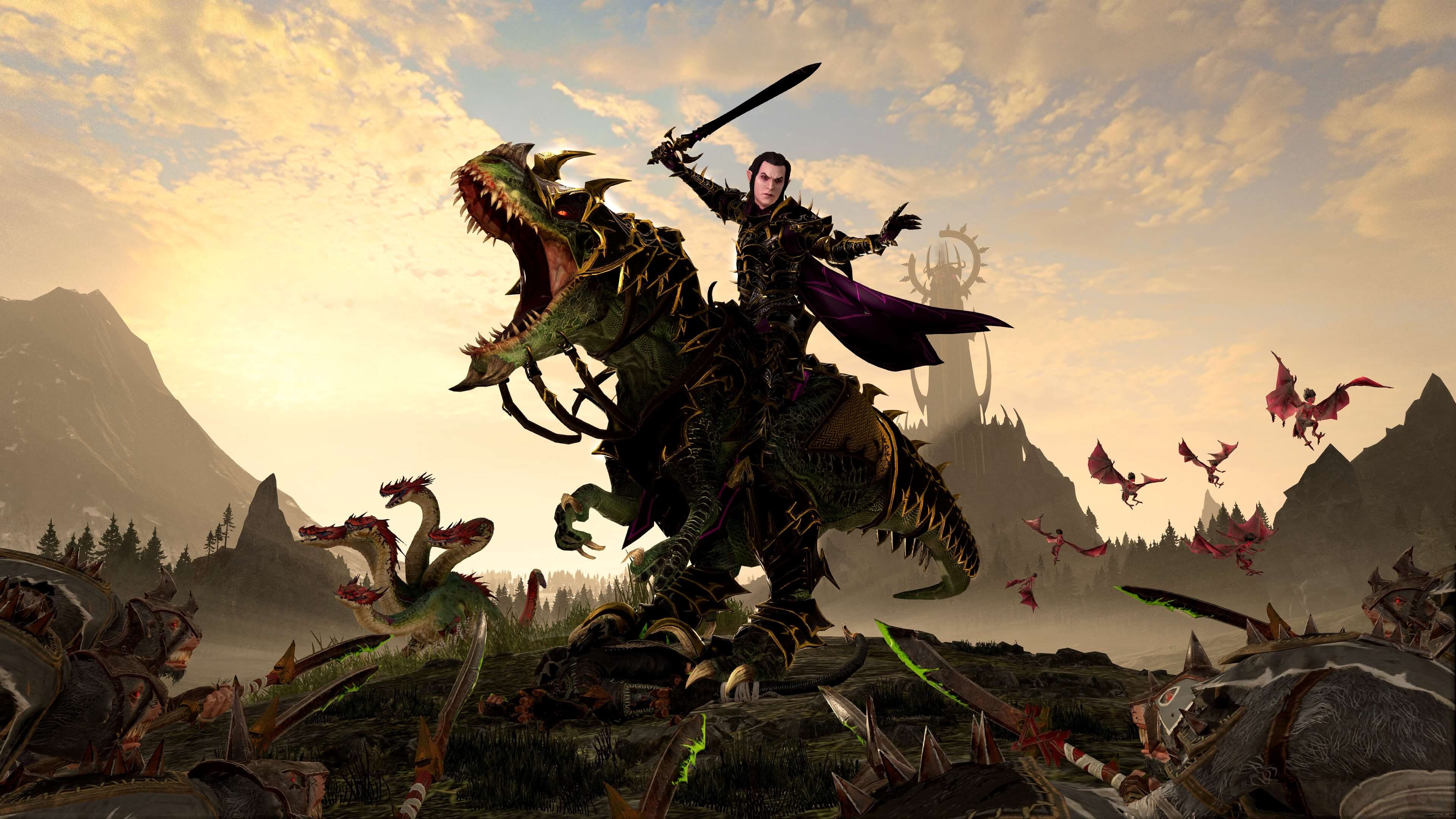 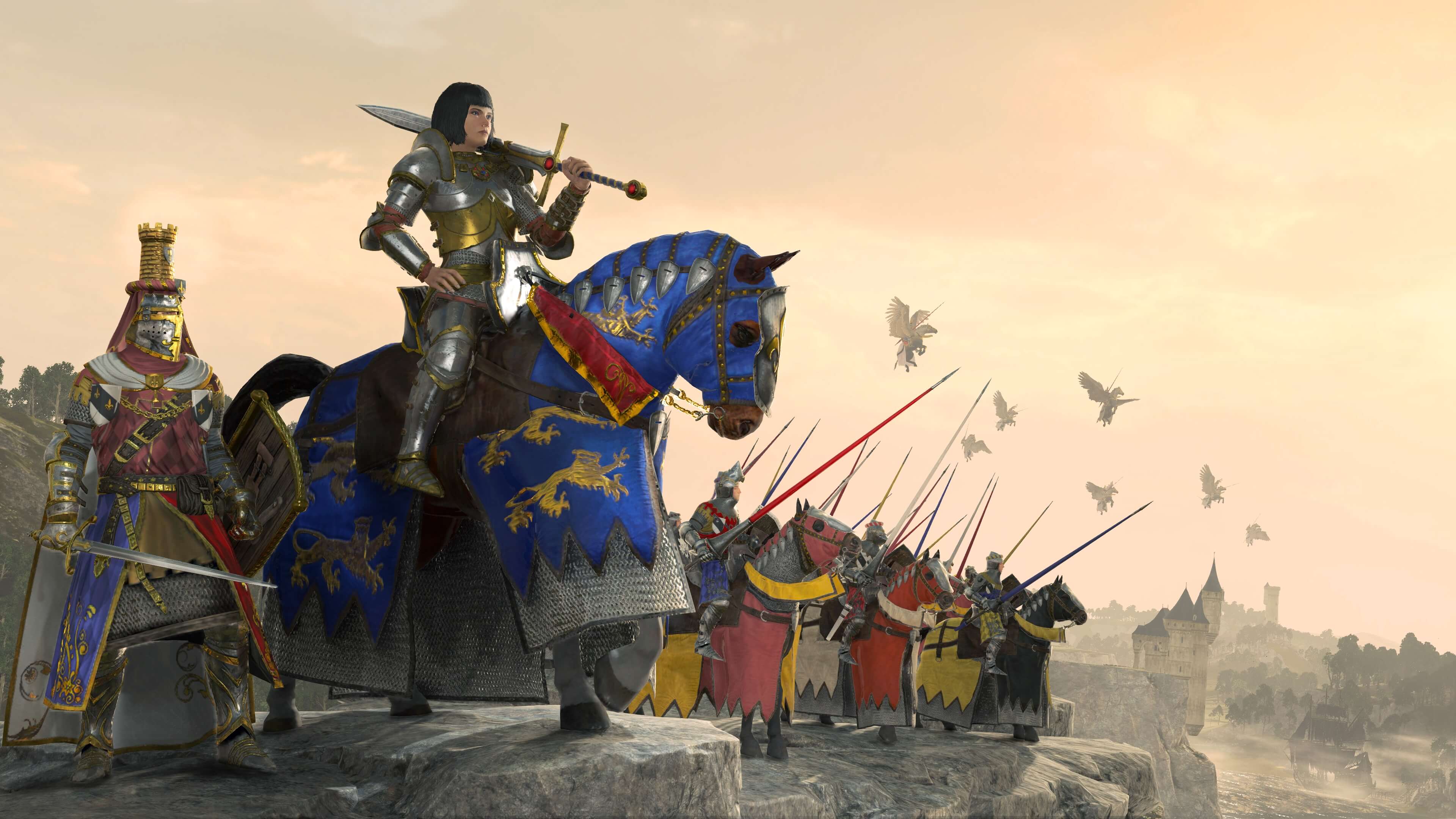 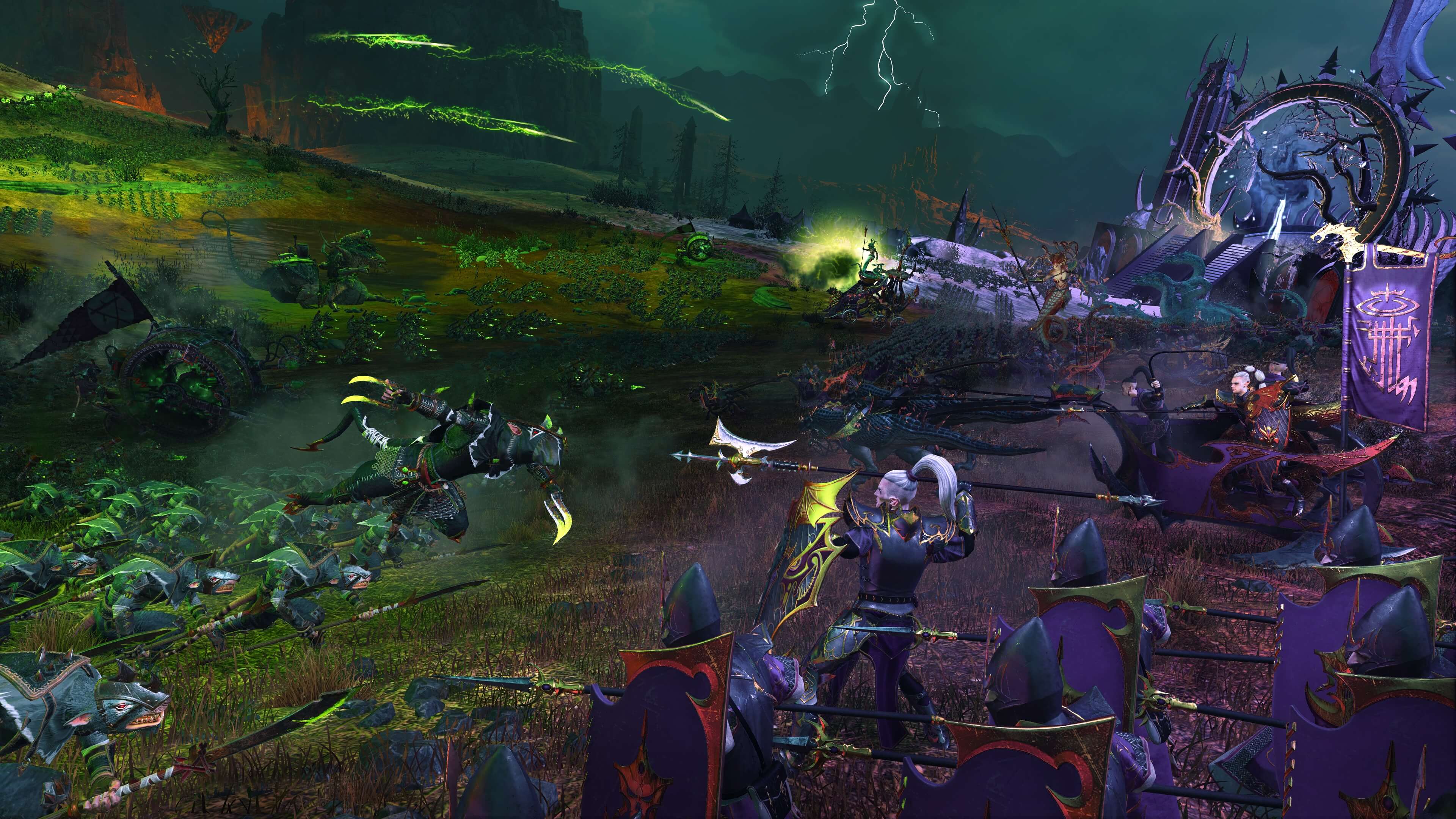 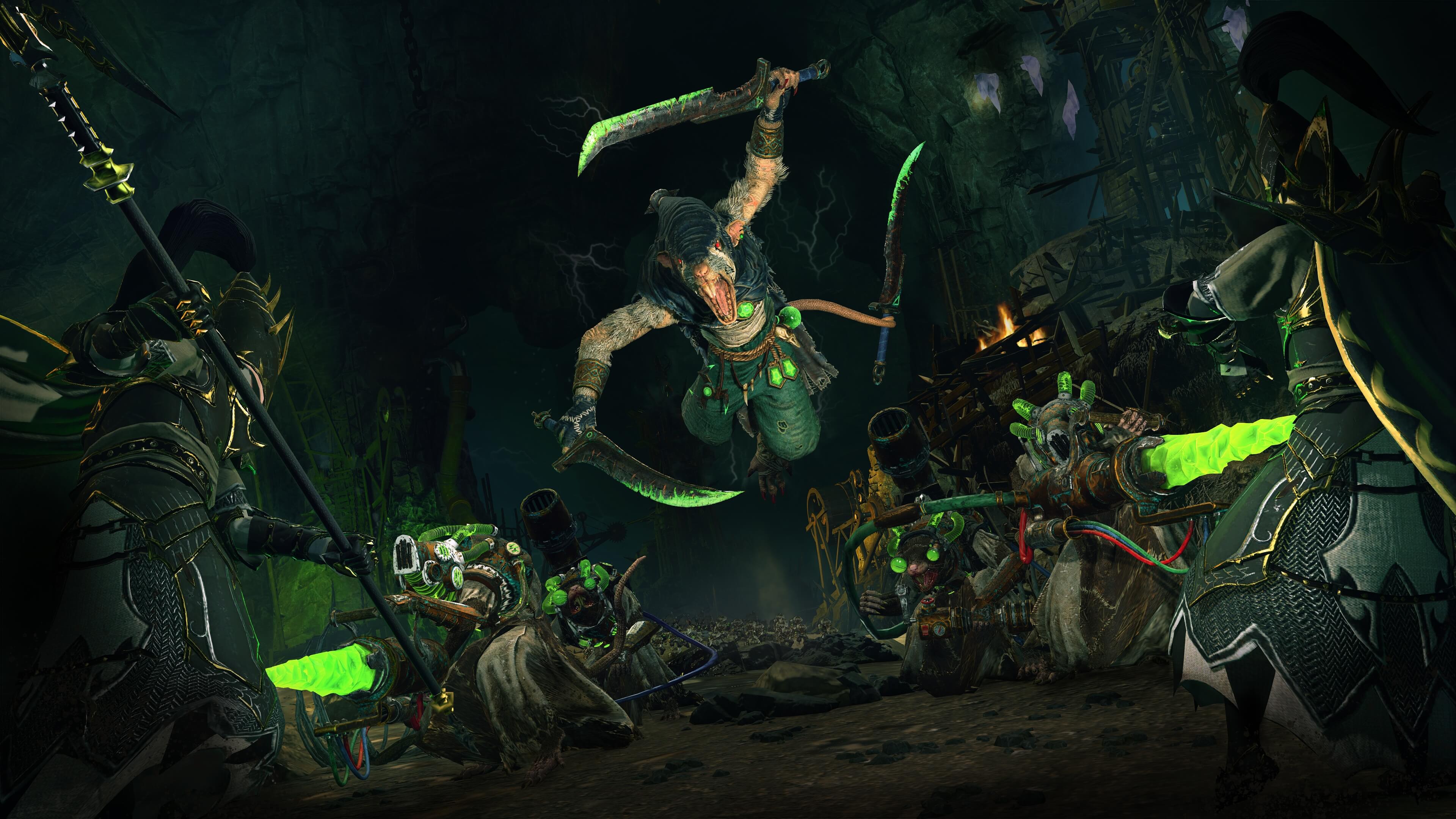 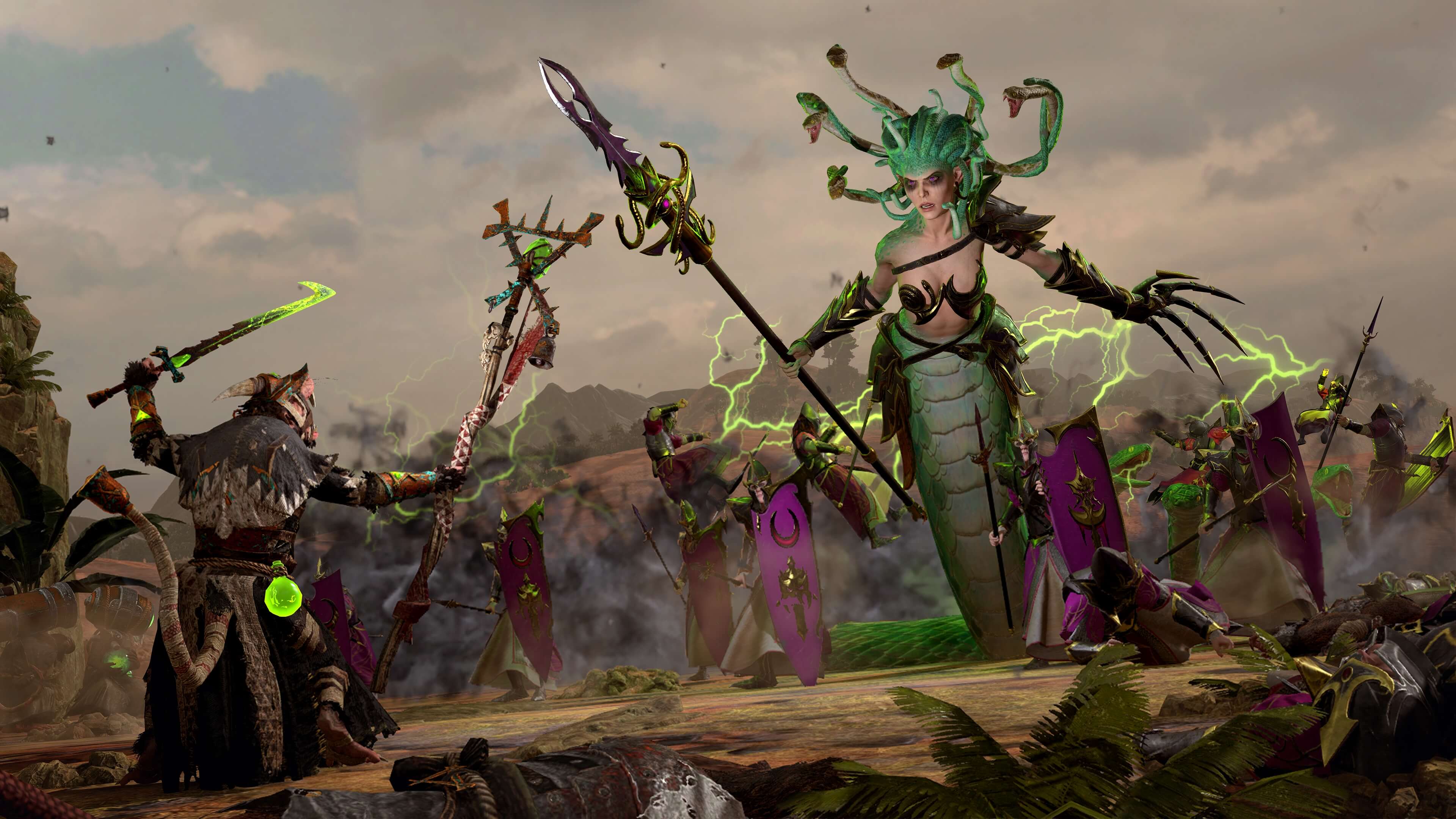 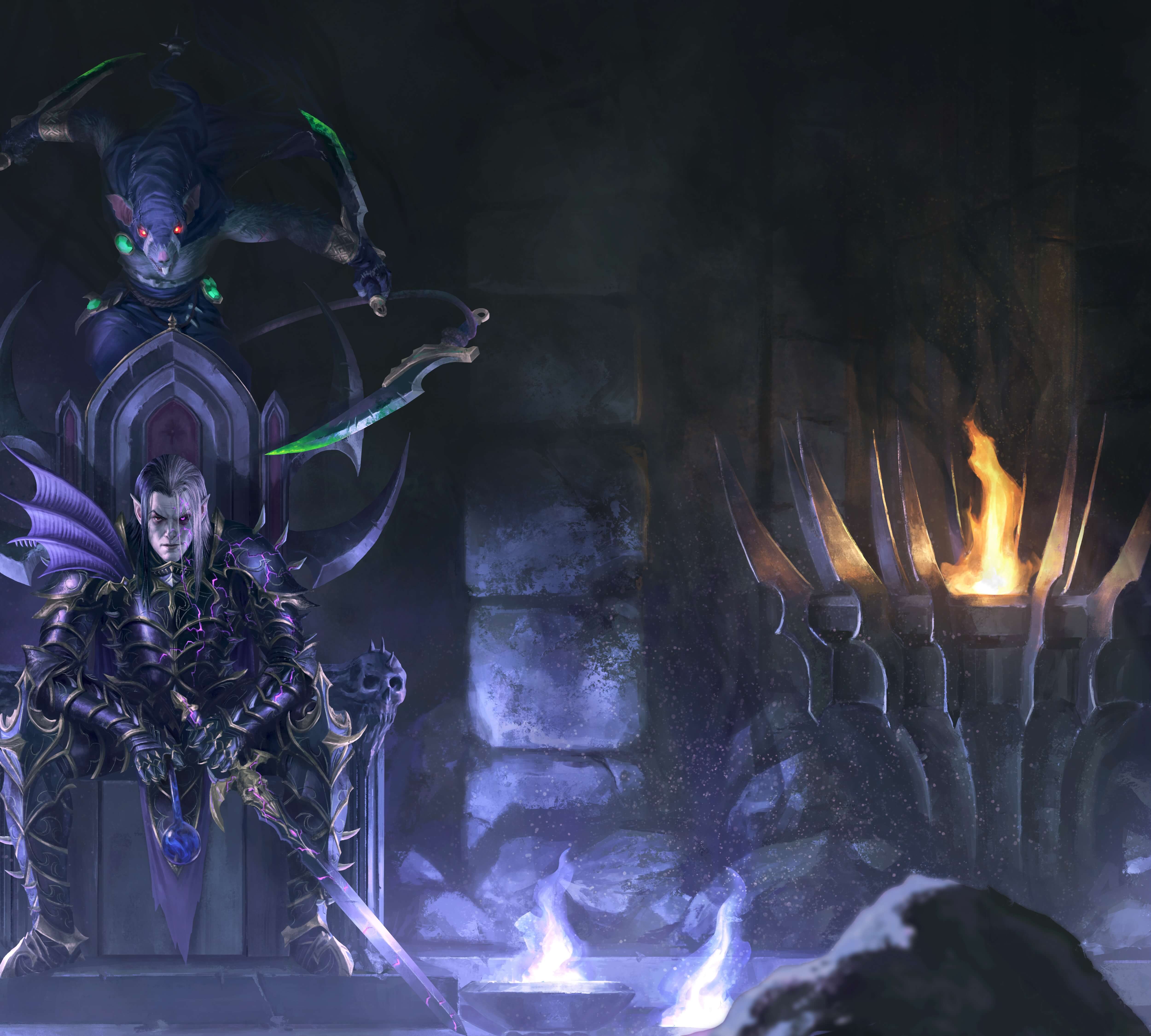 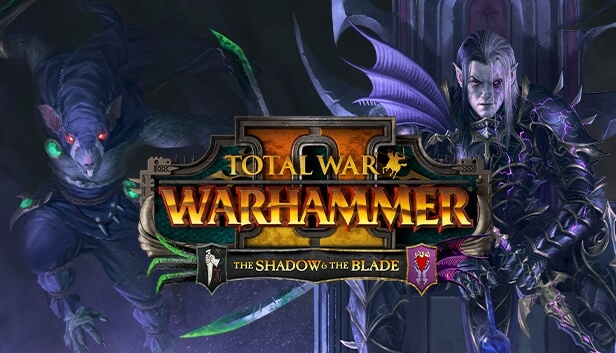 The Shadow & The Blade is the latest Legendary Lordpack for Total War: WARHAMMER II. Introducing Malus Darkblade and Deathmaster Snikch both with their own objectives, mechanics, units and playstyle.

- Adds new powerful units and heroes for both Dark Elves and the Skaven.

- Lethal chariots and pain-wracked Medusae for the sadistic warmongers of Hag Graef.

- Features new elite Regiments of Renown to lay catastrophic waste to your enemies across the New and Old Worlds.

Tz’arkan, the Drinker of Worlds, escaped from his eternal prison within the Chaos Wastes, only to end up bound inseparably with the with the very being who freed him, the violent and cruel Malus Darkblade. Sensing the potential of this Daemonic entity, the Nightlord of Clan Eshin has dispatched his most trusted assassin, Deathmaster Snikch, to track down the Daemon and uncover its true power.

In order to counteract his possession by Tz’arkan, Malus must continually drink an elixir that slows the Daemon’s influence over his mind. While the elixir is costly to consume, his master Malekith will gladly provide him with the recipe, but only if he helps him in his bid to control the Vortex.

Despite the obvious danger in allowing the Drinker of Worlds to take control of his mind, there are situations in battle when Malus might benefit from letting the possession overcome him momentarily; greatly amplifying even his legendary viciousness. However, managing such an addiction to seemingly endless power, confronts Malus with desperate challenges throughout his campaign, as he seeks to wrestle back control of his very soul.

Malus starts the game in control of the mighty city of Hag Graef, while also in command of an expedition force supported by a Black Ark, on the other side of the world.

In the opening stages of this campaign, the player is faced with a dilemma to either retain control of Hag Graef or give up the city in return for a hefty sum.

With an offer Darkblade will find difficult to refuse, you’ll need to choose between two distinct campaign starts. Juggling the machinations

Malus Darkblade is the embodiment of hate and ruthlessness, qualities spurred by the evil brutality of the Daemon Tz’arkan. As Malus struggles in a constant inner-fight with the Daemon, it will attempt to influence him to perform acts of unthinkable slaughter and cruelty. As part of a new mission system, Malus can follow the Daemon’s dark whispers in return for unique and powerful rewards in the form of items, followers and other treasures.

In battle, Malus is a heavily armoured close-quarters combatant who excels at dealing armour piercing damage thanks to his powerful Warpsword of Khaine. He rides a ferocious Cold One, called Spite, into battle and instils fear upon his enemies, making him a terrifying opponent on the battlefield.

Malus has the unique yet costly ability to transform into the Daemon Tz’arkan, the Drinker of Worlds.This ability refills his health, augments his stats and significantly alters his abilities in battle.

The Dark Elves have long been experts at bending beasts and animals to their will, and the High Beastmasters are those that show even greater talent and aptitude. In particular, Beastmasters have considerable anti-large capabilities, making them a powerful tool when facing enemies that bring numberous large units into battle.

Dark Elf Masters are the lesser nobles of Dark Elf society. Adept with both spear and shield, these Heroes are capable of inflicting great damage to large targets, but are also capable of soaking up the most gruesome of blows thanks to their high melee defence and Guardian ability which protects nearby characters.

Quick and deadly, these war machines tear across the battlefield looking to hunt down new prey to kill or enslave. Equipped with powerful harpoons, they are a dedicated monster-hunting unit, capable of bringing down even the mightiest of beasts.

Bound in pain-wracked serpentine bodies, the Bloodwrack Medusa is a terrifying sight to behold on the battlefield. These writhing, horrid monsters are best positioned behind the front line to maximise their powerful ranged attacks to decimate foes. However, they can match their ranged skill with ruthless melee capabilities, granting them a useful hybrid role while also causing fear and terror to enemy units.

Propelled by Dark Magic, the Bloodwrack Shrine grinds along the battlefield, inspiring allies and demoralising foes with its passive Aura of Agony and Aura of Ardour abilities. From her elevated position, the Medusa riding it has a far greater vantage point from which to cast her deadly gaze.

*The Siren of Red Ruin (Bloodwrack Medusa – Regiment of Renown)*

The Siren of Red Ruin is fear incarnate. This unique Medusa can call upon a damaging area-of-effect ability which tears apart enemy units in a radius around her, making for an extremely dangerous foe in close-combat.

The Ravagers of Rakarth are Clar Karond’s most elite Scourgerunner unit. Always thirsting for new quarry, this anti-large chariot is additionally armed with barbed nets that that slow enemy units in order to increase its killing potential.

*The Crows of Khaine (Harpies – Regiment of Renown)*

Harpies are always on the lookout for the next meal and the Crows of Khaine are the most ravenous. They provide regeneration abilities in exchange for damage dealt, increasing their survivability and causing terror in enemy units as they guzzle down the entrails of their victims.

Deathmaster Snikch and his agents are the most feared secret operatives in the world, capable of subterfuge actions that few others possess. Using any of their Eshin characters, Clan Eshin can perform numerous Shadowy Dealing actions against their rivals on the campaign map, with 100% success. Actions have a wide range of outcomes including the simple theft of items or money, all the way to spying, inciting rebellions, and assassination,. The Deathmaster himself is even able to burn down entire cities!

Skavendom’s unseen leaders are forever seeking to disrupt and backstab each other on the Council of Thirteen. When a problem arises that needs serious attention, the Greater Clans approach Clan Eshin to do their dirty work. These Clan Contracts allow Clan Eshin to receive money, food and increased reputation with the issuing clans, thus granting bonuses and reducing the cost of the Greater Clans’ specialized units.

With unmatched stealth abilities and immense duelling prowess, Deathmaster Snikch excels at fighting other characters, especially when they vulnerable and have already taken damage. Armed with his deadly Weeping Blades, he can instantly reduce a target’s armour by 50% on contact. Snikch also has the Vanguard Deployment and Stalk abilities, further cementing his role as the foremost Master Assassin of the Skaven.

Following in Snikch’s example, the Master Assassin excels at battling opposition characters in close combat but can also rely on their ranged shuriken attack to take enemies out from a distance. Their wide range of abilities such as Vanguard Deployment, Stalk and Concealment Bombs make them lethal ambush commanders to unleash upon your enemy.

Masters in the art of silent death, Eshin Sorcerers use the Lore of Stealth to support their allies from the rear of the battlefield. This new magic lore has a focus on sneakiness and controlling the battlefield, meaning they can dictate the tempo and flow of the battle to their advantage.

Only the most devout apprentice assassins ascend to the rank of Triad. Well-drilled and deadly, these warriors are a versatile alternative to their Clanrat and Stormvermin brethren and are best utilised behind the front ranks, excelling at exploiting gaps and weaknesses in the enemy lines. Whilst their armor isn’t the strongest, they make up for it with their Vanguard Deployment and Stalk abilities. Capabilities which enhance their sneakiness on the battlefield.

These mobile, rat-portable mortars are packed with a payload of poisoned wind-globes which can be fired at a much greater distance than their Globadier equivalents. Capable of causing the enemy damage over time as they choke on the deadly Warpstone gas, this unit excels at damaging a wide swathe of the enemy at once.

Drilling into the ground and their enemies alike, the Warp-Grinder Weapon Teams rely upon powerful active abilities that create devastating effects on the battlefield. Once they’ve tied down their enemies with tremor effects, their drills can pierce the toughest of armours… provided the team can get within range. This unit can also destroy settlement walls, rending stone asunder with scant regard for friend or foe.

These rare and infernal devices can fire special air-burst globes from great distances that explode in mid-air and inflict devastating armor-piercing damage upon all units unfortunate enough to be caught in their line of fire.

Viskrin’s Death Squad are the elite among their rank and excel at acts of espionage. Lightly armoured but highly mobile, this unit is capable of outputting great amounts of armour piercing damage with their trusty weeping blades as well as making use of their elite combat agility in order to become even harder for the enemy to hit in return.

Ishka’s Triads follow the teachings of Ishka Fastclaw, who was once the Nightlord of Clan Eshin. Exhibiting deadly anti-large capabilities, they have the ability to summon a decoy of themselves upon the battlefield, making them ideal for deceiving the enemy while both attacking and retreating.

Keep an eye on our official website and social media channels for our first gameplay reveals for this DLC. Have a question? Read the Announce FAQ for more information