The Queen & the Crone is the first Lords Pack for Total War: WARHAMMER II. Bolstering the forces of the High Elves and the Dark Elves, it introduces famous rival characters and new iconic units from the world of Warhammer Fantasy Battles to your campaigns and battles. 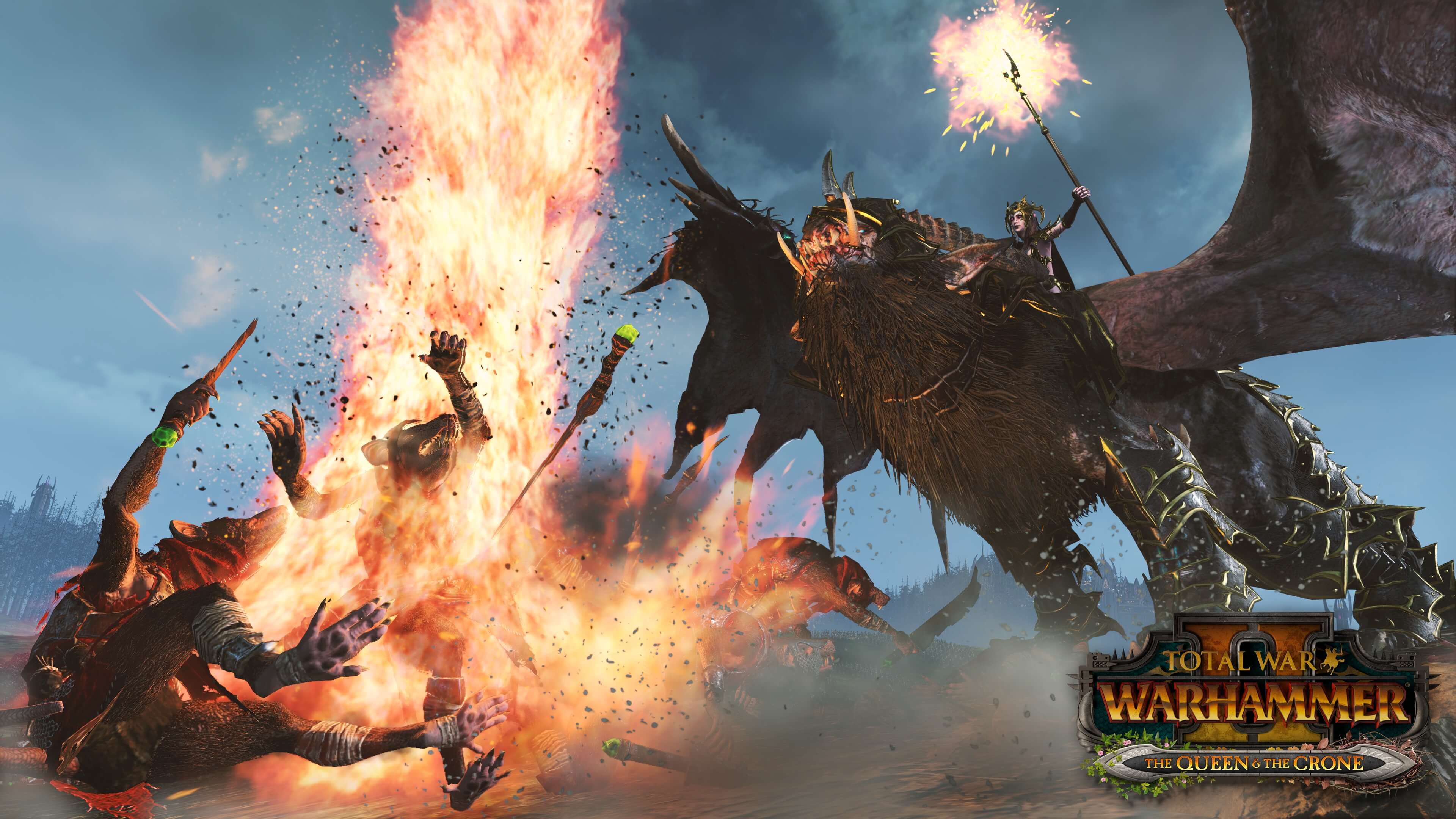 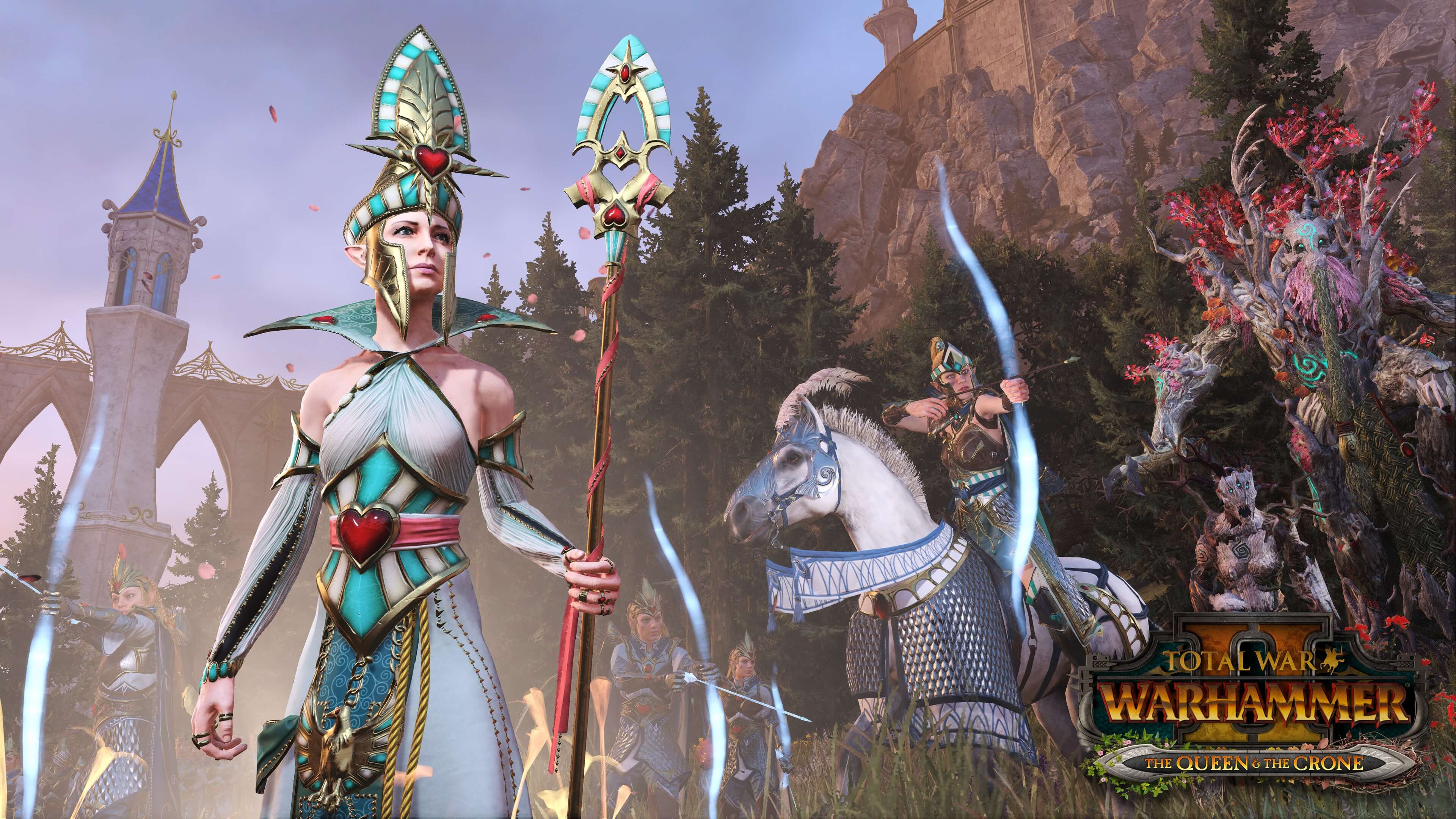 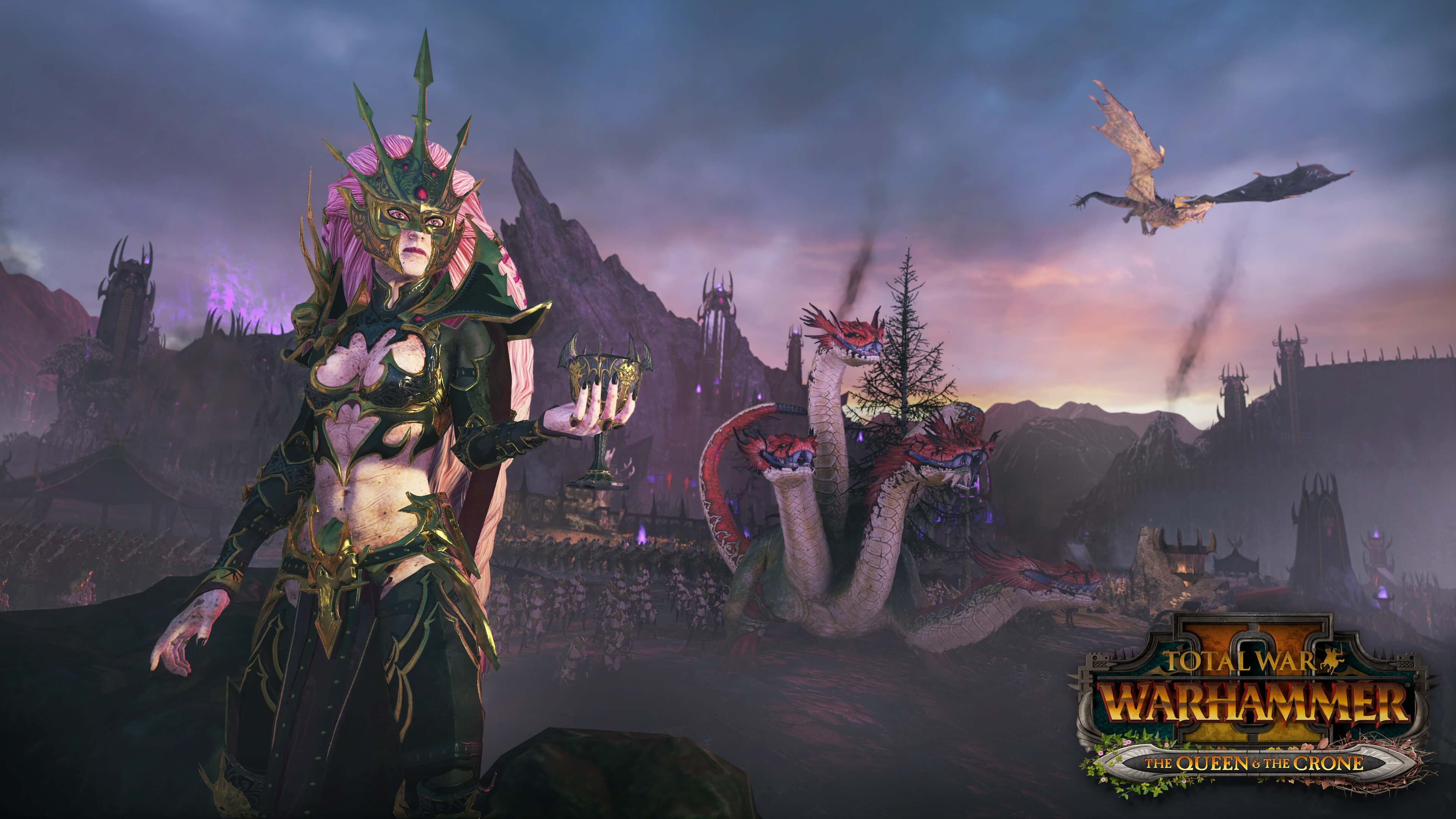 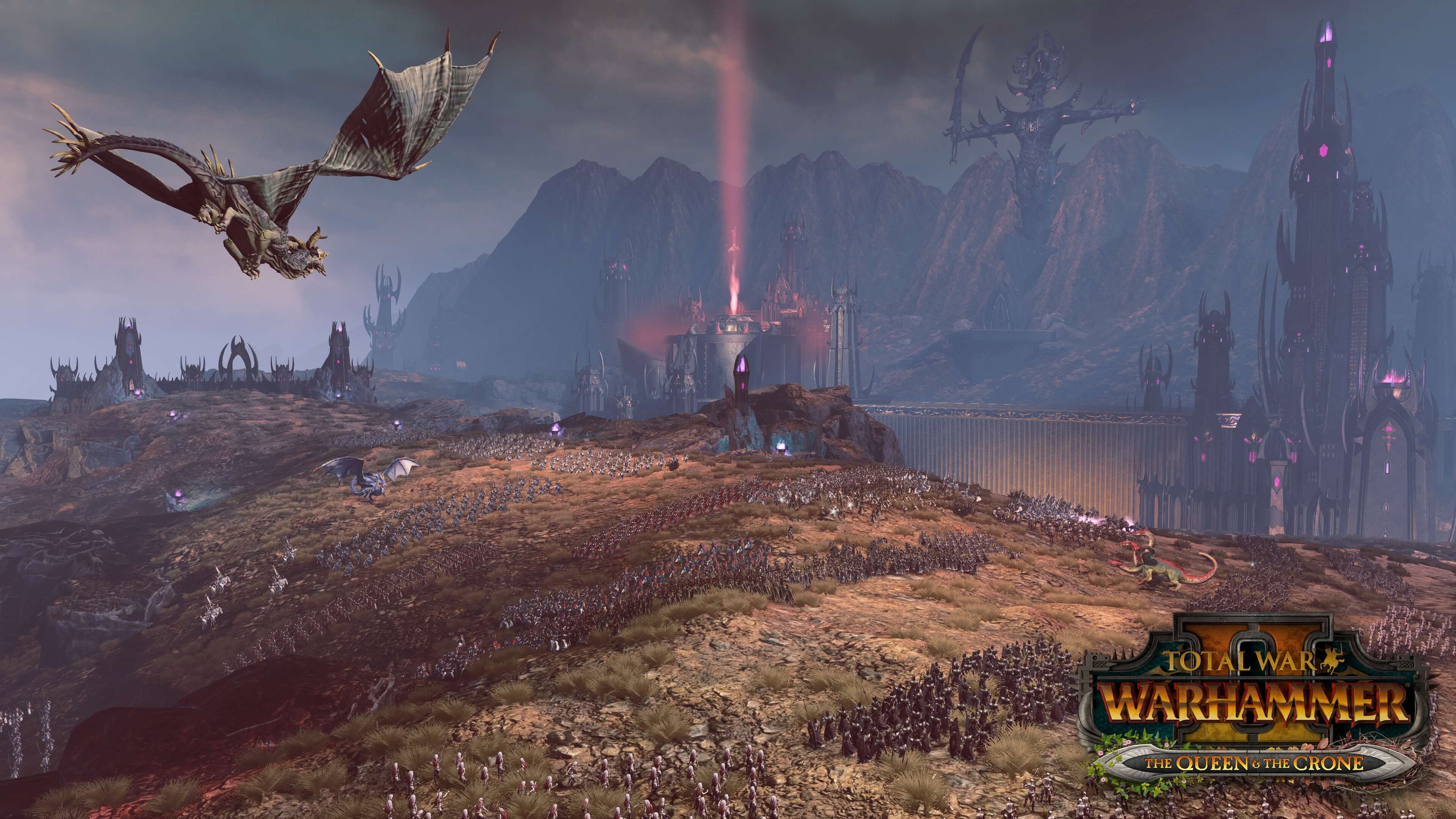 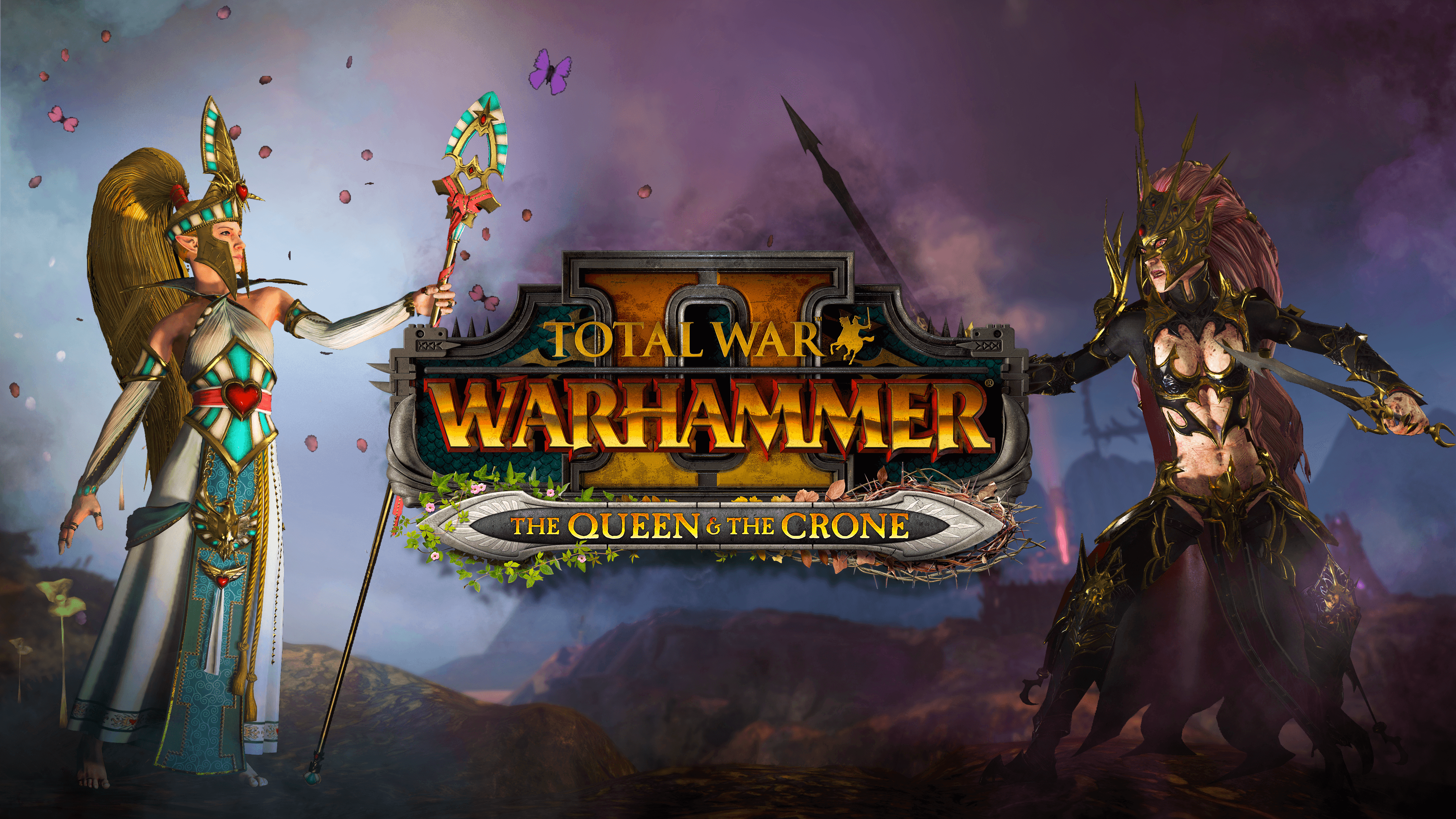 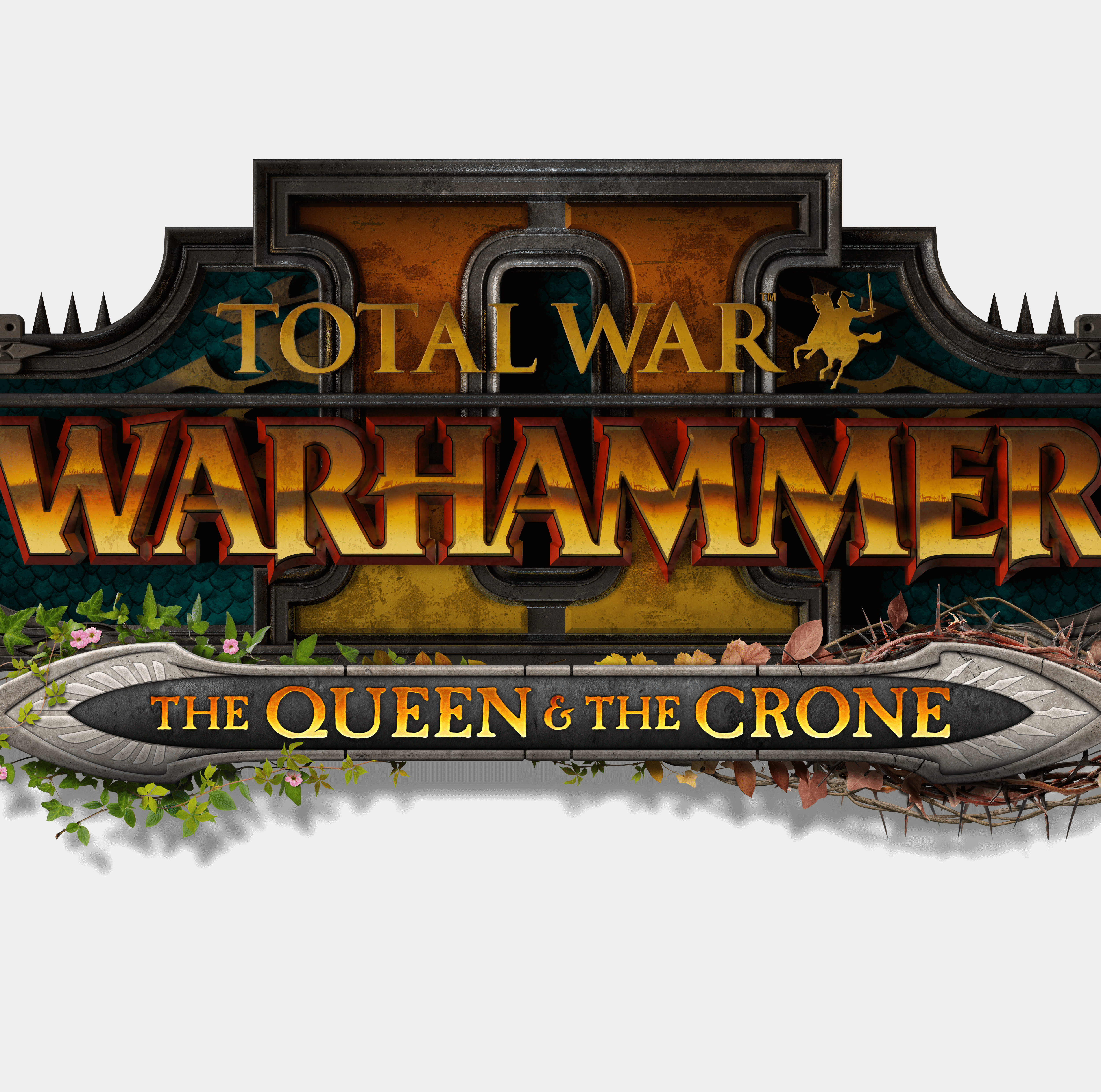 The Queen & the Crone is the first Lords Pack for Total War: WARHAMMER II. Bolstering the forces of the High Elves and the Dark Elves, it introduces famous rival characters and new iconic units from the world of Warhammer Fantasy Battles to your campaigns and battles. The content in this pack is available in both the Eye of the Vortex and Mortal Empires campaigns.

But this is not all. The Druchii possess a dark and powerful weapon.

When blood runs in rivers and the air is choked with Death, the chains will break and this monstrous secret will be unleashed.

New battlefield units for both races

Only in times of the grave peril does Alarielle the Everqueen, the living embodiment of Isha, take to the battlefield. Her eternal duty: to defend Ulthuan and its residents from the depredations of the impure. With a rallying cry, she is joined by the Handmaidens, the Sisters of Averlorn, and the spirits of the woods themselves!

Meanwhile, dark acts are afoot in Naggaroth. Crone Hellebron stirs in Har Ganeth, and calls a Blood Night: the slaves are released upon the streets and slaughtered in their thousands. Bathing in the rivers of spilled blood, Hellebron’s powers are magnified beyond belief, with Doomfire Warlocks and Sisters of Slaughter flocking to her banner. The Asur will pay for their eternal treachery – and imminently!

Commanding the High Elf faction of Averlorn, Alarielle’s power is that of nature itself. As she travels through the Elven lands, she brings great joy to the people, improving public order and reducing corruption. However, she is also subject to the Mortal World’s Torment; as Chaos seeps into the world, her battlefield powers wane. Only reducing and ridding of Chaos armies will return her to her full powers.

Alarielle is a mixed-lore Caster, with access to a blend of Life magic and High magic. She may embark on a quest for her Legendary Item, the Star of Averlorn, and may be upgraded to ride an Elven Steed, Barded Ithilmar Steed, and a Great Eagle. She can also recruit Forest Spirit units such as Dryads, Treekin and Treemen.

Alarielle also has a unique campaign mechanic called Defender of Ulthuan. It is her sacred duty to see that the inner and outer territories of the High Elves’ home are kept free of enemy occupation. While they remain clear, they bestow powerful benefits. Should invaders sully Ulthuan with their presence however, the Asur’s trust in Alarielle will fall, bringing a suite of negative effects.

Alarielle has access to a unique Rite: The Invocation of Lileath. Once active, this rite brings a suite of benefits to Handmaidens, Sisters of Averlorn and Dryads.

Hellebron the Hag-Queen leads the forces of Har Ganeth, a uniquely murderous Dark Elf faction. She may periodically call a Death Night, expending slaves on a night of murderous rampage, to keep her powers strong. Failure to regularly hold these festivals will have a detrimental effect on Hellebron. As each Death Night is called, nearby Dark Elves undertake the Blood Voyage, raising an army in thrall to Crone Hellebron, and in whose post-battle rewards she shares.

Hellebron gains massive upkeep reductions to Witch Elves and Har Ganeth Executioners and Sisters of Slaughter, which she can also improve via her unique skill tree. She may embark on a quest for her twinned Legendary weapons, the Deathsword and the Cursed Blade, and may be upgraded to ride a Dark Steed, a Cauldron of Blood, and a Manticore.

Hellebron also has access to a unique new Dark Elf rite: Sacrifice to Drakira. Once active, this rite brings bonuses when fighting High Elves, a reduction in diplomatic relations with High Elves, and rank bonuses to both Death Hags and Witch Elf units.

Among Alarielle’s most loyal warriors, the Sisters of Averlorn are dual-role combatants, skilled with both blade and bow. Their Bows of Averlorn deal Magical Flaming attacks, and like many High Elf units, they are subject to Martial Prowess.

The first (and often last!) clue a foe gets to the presence of the Shadow Warriors is a ravaging hail of arrows tearing into their ranks. With Vanguard Deployment, Stalk, and long-range bows, they can remain undetected while raining death from afar. They are also Master Ambushers, enabling them to stay hidden on the move, in any terrain, while firing in any direction.

These murderous gladiators of death wield cruel lash-whips dealing poisonous attacks. They also cause Fear, are subject to Murderous Mastery, and can trigger the Trial of Blades augment when losing in melee, improving their combat abilities.

These elite, magical cavalry are very fast moving, and deal both Magical and Poisonous attacks in melee. They are subject to Murderous Prowess, and may cast two Bound Spells: Soulblight and Lesser Doombolt.

Handmaidens act as the right hand of Alarielle. They have several unique specialisations available in their skill trees, enabling them to influence diplomacy, trade and influence, to bolster their resilience in battle, and to make them peerless archers.

Hellebron can field new caster Lords to lead her armies. Supreme Sorceresses may be recruited to wield the lores of Fire, Dark, Shadows, Beasts and Death. They can be given Names of Power to grant them new abilities, and upgraded to ride a range of mounts, from the Dark Steed to the Cold One, Dark Pegasus, Manticore and the mighty Black Dragon.

• The Scions of Mathlann (Spearmen)

• Keepers of the Flame (Phoenix Guard)

o Mark of Asuryan (Entities will burst in to flames upon death and deal damage to any nearby enemies i.e. New interpretation of the Dwarf Slayer ‘Death Blow’ trait)

o Does not Rampage like other Cold One units