With the introduction of The Furious Wild Expansion Pack comes the first ever extension of the Total War: Three Kingdom’s map and its already rich cast of characters. Visit the jungles around Southern China and with it, the fearsome tribes of the Nanman. Will you unite the tribes of the south? 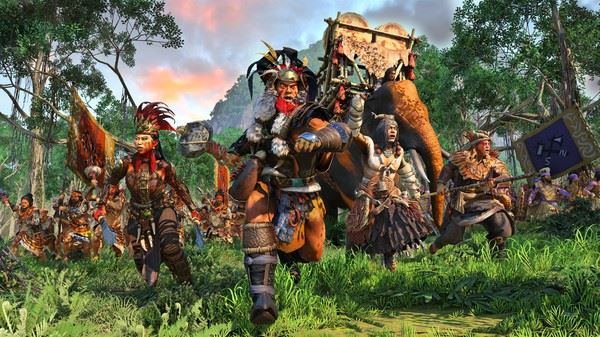 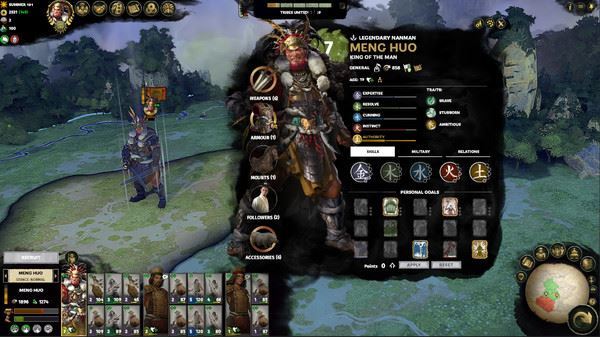 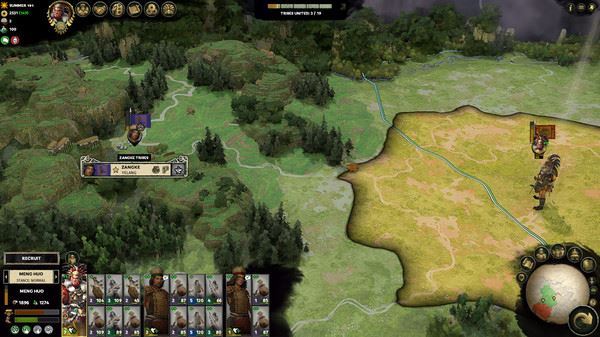 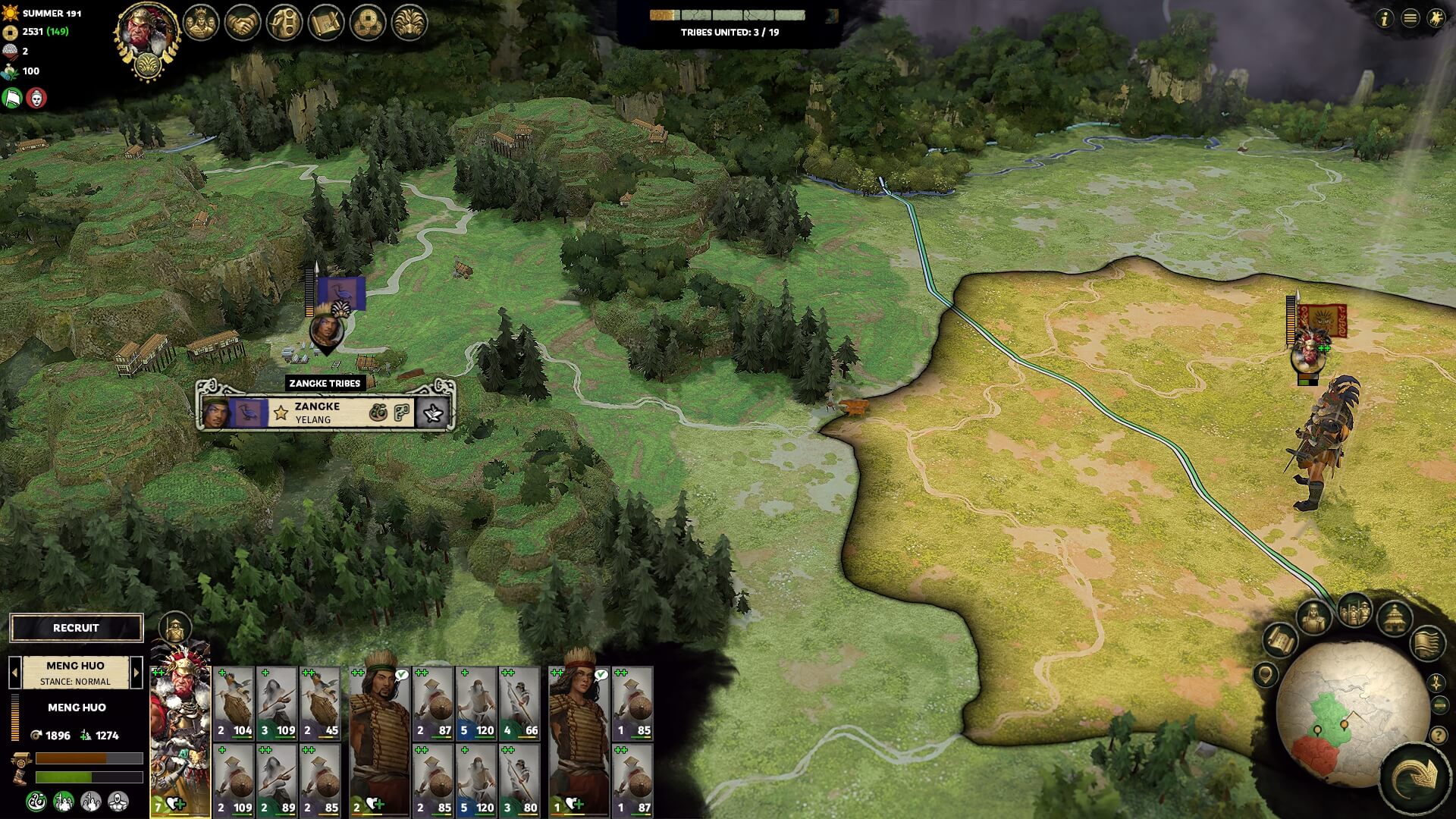 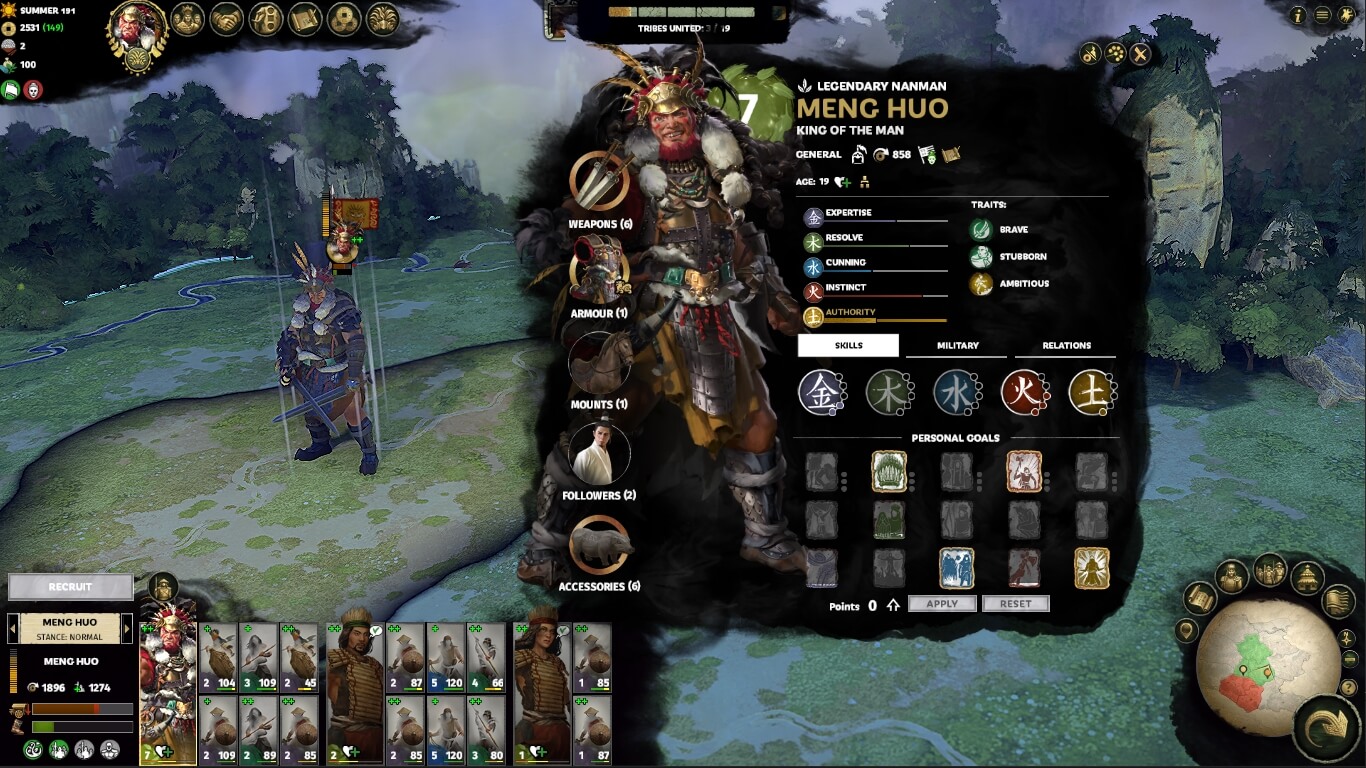 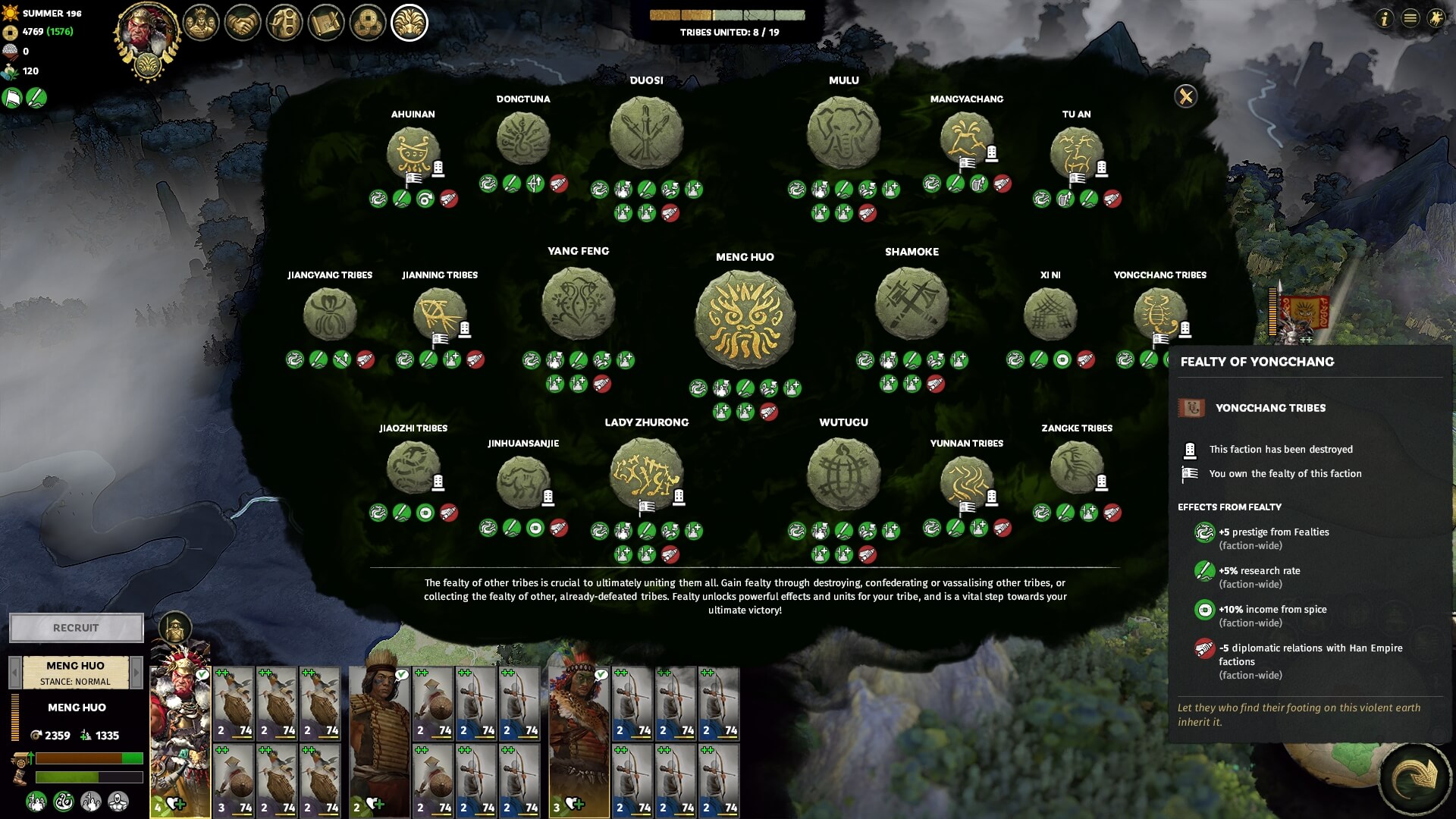 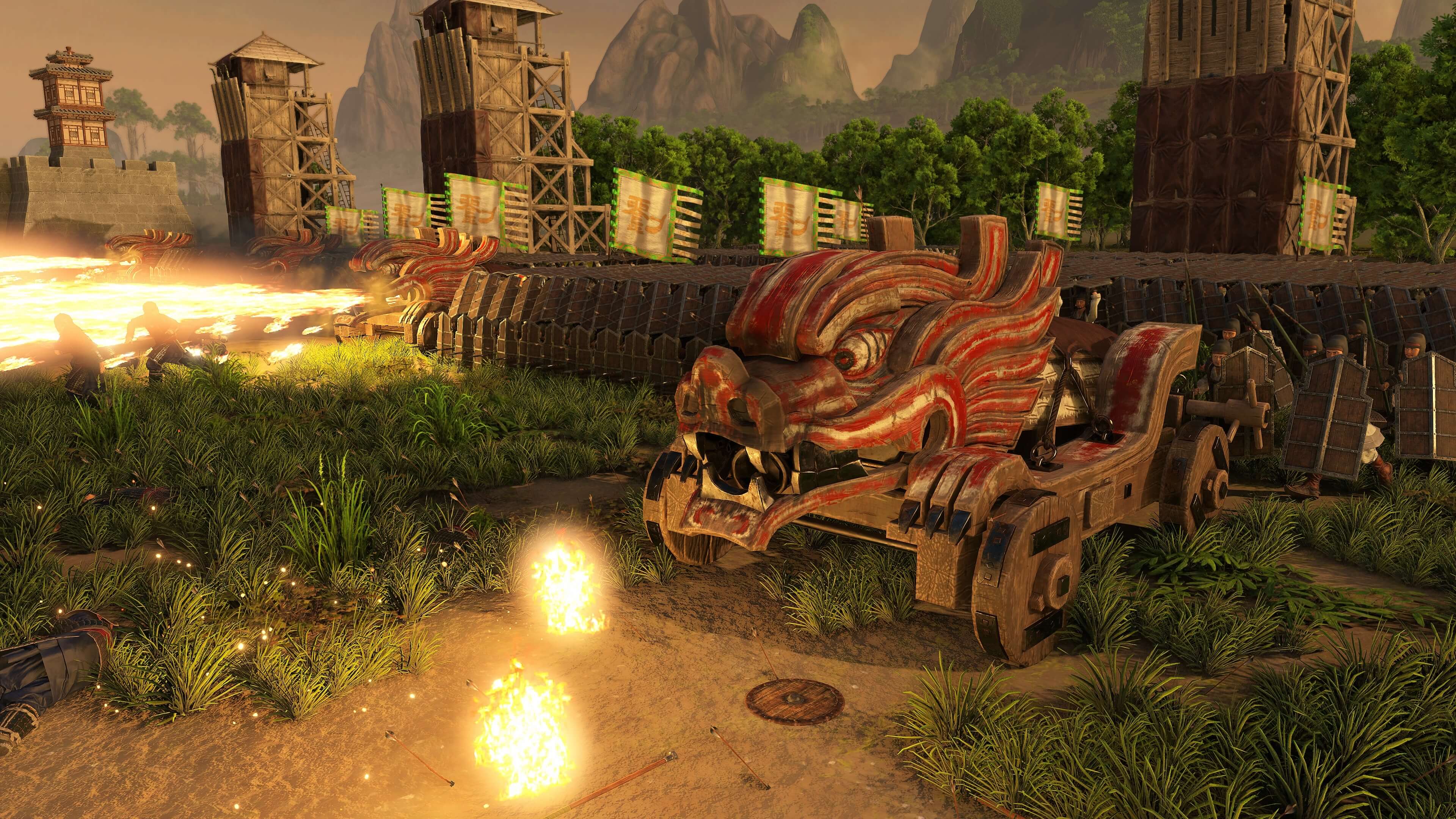 With the introduction of The Furious Wild Expansion Pack comes the first ever extension of the Total War: Three Kingdom’s map and its already rich cast of characters. Visit the jungles around Southern China and with it, the fearsome tribes of the Nanman. Will you unite the tribes of the south?

As well as expanding the Three Kingdoms map, The Furious Wild includes the new Nanman culture, adding diversity to the base game factions, units and playstyles:

- 4 new playable factions each with their own unique mechanics, with 19 new factions overall populating southern China

- Unique missions and narrative events bespoke for the Nanman culture

- One goal to ‘Unite the Tribes’, but how will you achieve it, through diplomacy or conquest?

Difference unites as much as it divides

In the verdant jungles of Southern China, forces so far unmet are stirring. The disparate tribes of the Nanman have for centuries lain divided, but now a new leader must emerge to unite them – by any means necessary.

The mighty warriors Meng Huo, King Mulu, Lady Zhurong and King Shamoke bring with them unique methods of battle, from flaming maces and blowpipes, to revered elephants and tigers. Separated they are vulnerable, together, they might just be unstoppable.

Play as any of the new playable Nanman factions in the years before their encounter with Zhuge Liang and his famous Southern Campaign. Experience the might of the Southern tribes, all while exploring new areas of the Three Kingdoms map. Can you unify these unique warriors and take on the mighty Han, or will jungle warfare take its toll on these newly formed allegiances?

Having risen through the ranks of the Nanman tribes, Meng Huo has gained repute for his fierce but stubborn leadership. Loyal to his friends but merciless when it comes to his enemies, his tenacity garners him as much trouble as it does success. With one goal in mind – becoming the king of the Nanman – Meng Huo must look to his neighbours to help spread the flames of his rule.

When Meng Huo takes control over another Nanman faction, either by making an alliance or destroying them, he gains certain temporary bonuses. These bonuses can also be stacked, creating a rolling momentum that will surely bring Meng Huo the kingship he desires.

- Nanzhong Champions: A cut above your usual shield-wielding infantry – perfect for holding your frontline steady as a rock in the face of incoming missiles

- Nanzhong Elephants: Drummers sit atop these mighty elephant units, playing rhythms that provide passive buffs to your nearby units. Use them to wreak havoc on the frontline or pull them back to provide support for your units

- Nanzhong Spearmen: The eye-catching rattan armour these spearmen wear provides defense against any errant darts headed their way, leaving them free to focus on any incoming mounted foes

A descendent of the god of fire, sparks fly when Lady Zhurong enters the battlefield. With a hot temper and an iron will, she seeks to expand her lands, and remove any obstacles in her way. Her passion seems impossible to rival, but there may just be allies closer than she thinks.

Across the seasons, Lady Zhurong accumulates points toward her Goddess of Fire mechanic. Once enough points have been gathered, players have the ability to activate her Wild Fire bonus; this formidable bonus makes her units near unbeatable in battle. The bonus changes according to the season it is activated within, and these powerful effects last across a series of turns. Once Wild Fire has burned out, Lady Zhurong is vulnerable for a short period and will need to recover before she can fight again without weakness, so time your expansion wisely.

- Tiger Warriors: These axe-wielding warriors have an ace up their sleeve – their tiger companions. Use these tigers to give your opponents a scare before going in for the kill

- Followers of the Flame: What’s better than a two-handed mace? A two-handed mace that’s on fire. Engage this fiery unit in as many frontline battles as possible and watch as their damage-over-time effect causes chaos

- Tiger Slingers: While tigers disrupt your opponent’s line, these slingers will pick off any stragglers who manage to escape

In the undergrowth of the Southern jungle roams King Mulu, a friend to the animal kingdom, but a stranger to man. Spending time in the animal world has gained him many advantages, not least, the mighty elephants that walk by his side. Now Mulu must face his brethren, but will his pride get in the way of future partnerships?

You know what they say, ‘Pride always comes before a Ritual’, quite literally in the case of Mulu. During his campaign he will accumulate Pride, his faction’s pooled resource, according to the rank of characters he defeats in battle. Your faction will gain lucrative bonuses to animal units, such as an increase in unit capacity and even a decrease in recruitment cost, in line with the amount of Pride you have reached. Periodically, Mulu will take part in spiritual rituals, invoking the elements to grant additional distinct bonuses for his faction.

- Southern Elephants: A small band of elephants that pack a mighty punch to frontlines, accompanied by some handy slingers on their backs

- Ravine Warriors: These frontline warriors are ready to clean up after any elephant-related carnage with a weapon in each hand

Shamoke’s origins may be as murky as the dense jungle he controls, but his drive for power is all Nanman. As the ruler of the five valleys, several tribes have pledged their allegiance to him, but many remain wary of the leader. The Han’s interest in him has only deepened this suspicion. With both sides in opposition, Shamoke must choose where his loyalty truly lies, and neither choice is without cost.

Shamoke’s chief concern is uniting the Nanman under his rule, and so, his faction mechanic gives him bonuses according to what unification technique the player chooses to employ. Whether you conquer, subjugate or reform, power is yours for the taking and you will be rewarded for the followers you bring to your side.

- Might of the Valley: Fast two-handed axe infantry that gain large bonuses when fighting near death – watch as they flank and charge enemies into submission

- Wuling Slingers: These light-footed short-range units are able to side-step potential terrain penalties – ideal for skirmishing in dense jungle where they can quickly evade and wear down enemy units

- Wuling Fighters: Offensive-minded warriors with a health pool hardy enough to take the mightiest of blows. These fighters do best pitted against the strongest heroes