The largest and most detailed Total War: THREE KINGDOMS DLC to date... 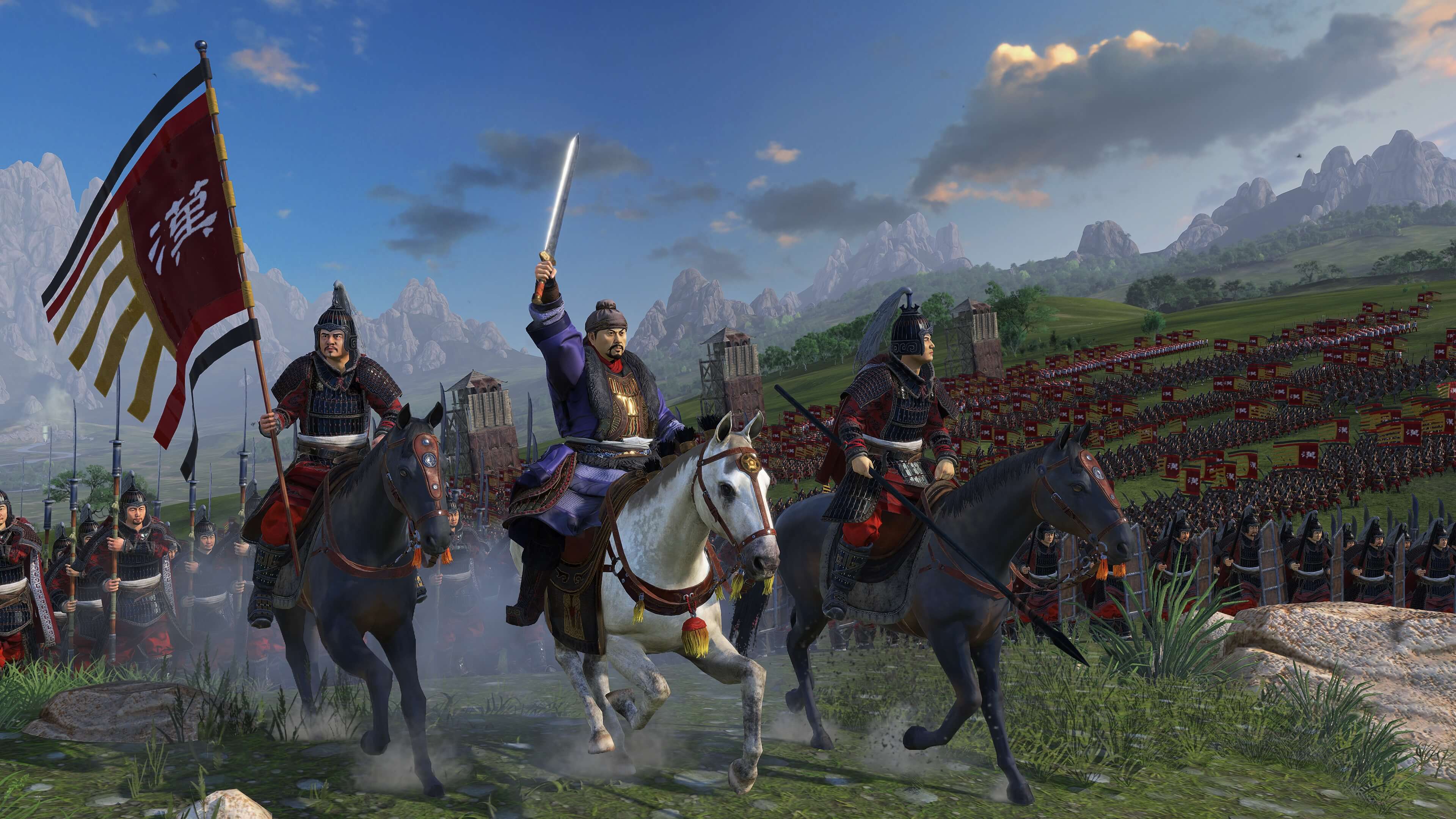 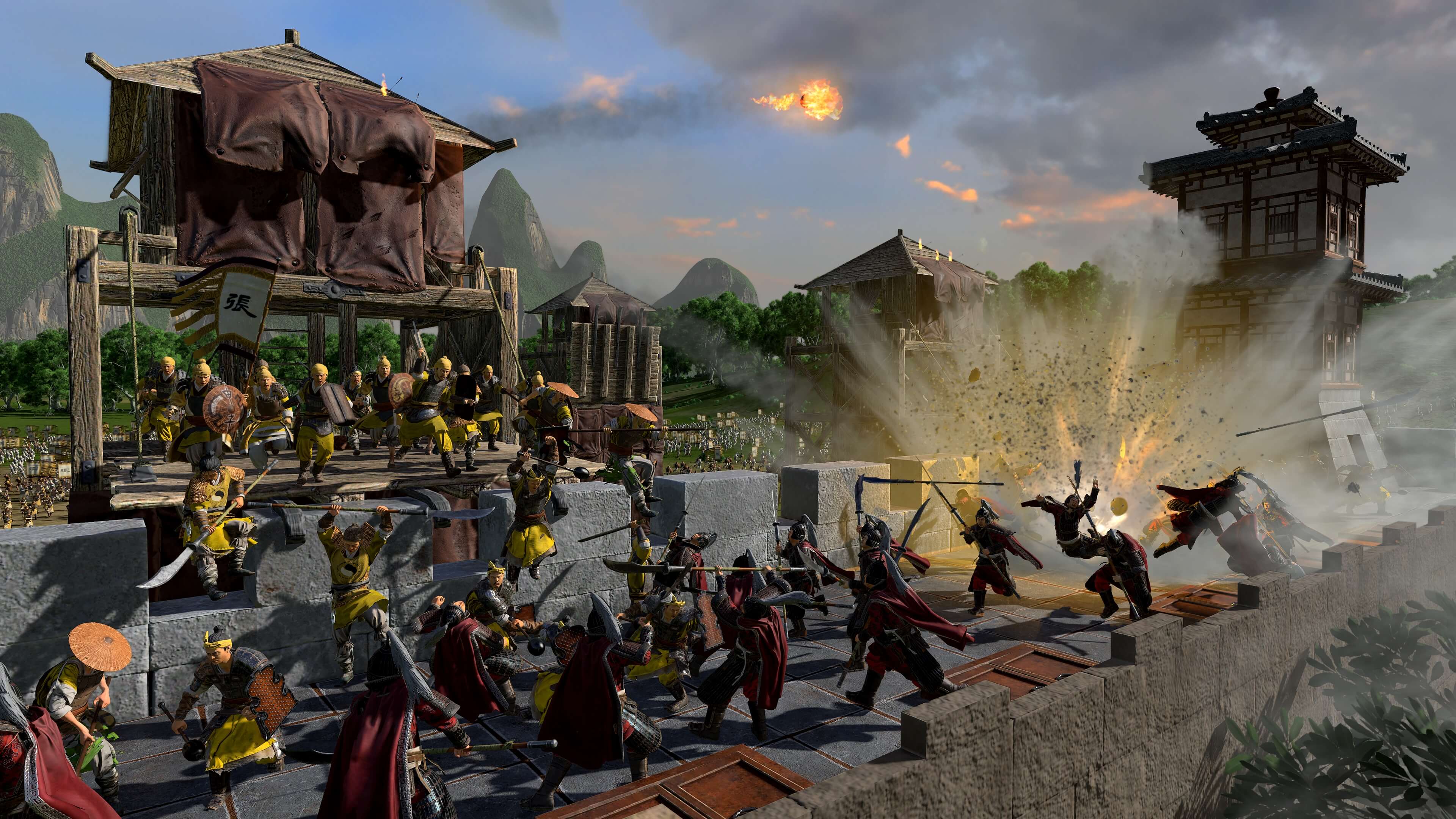 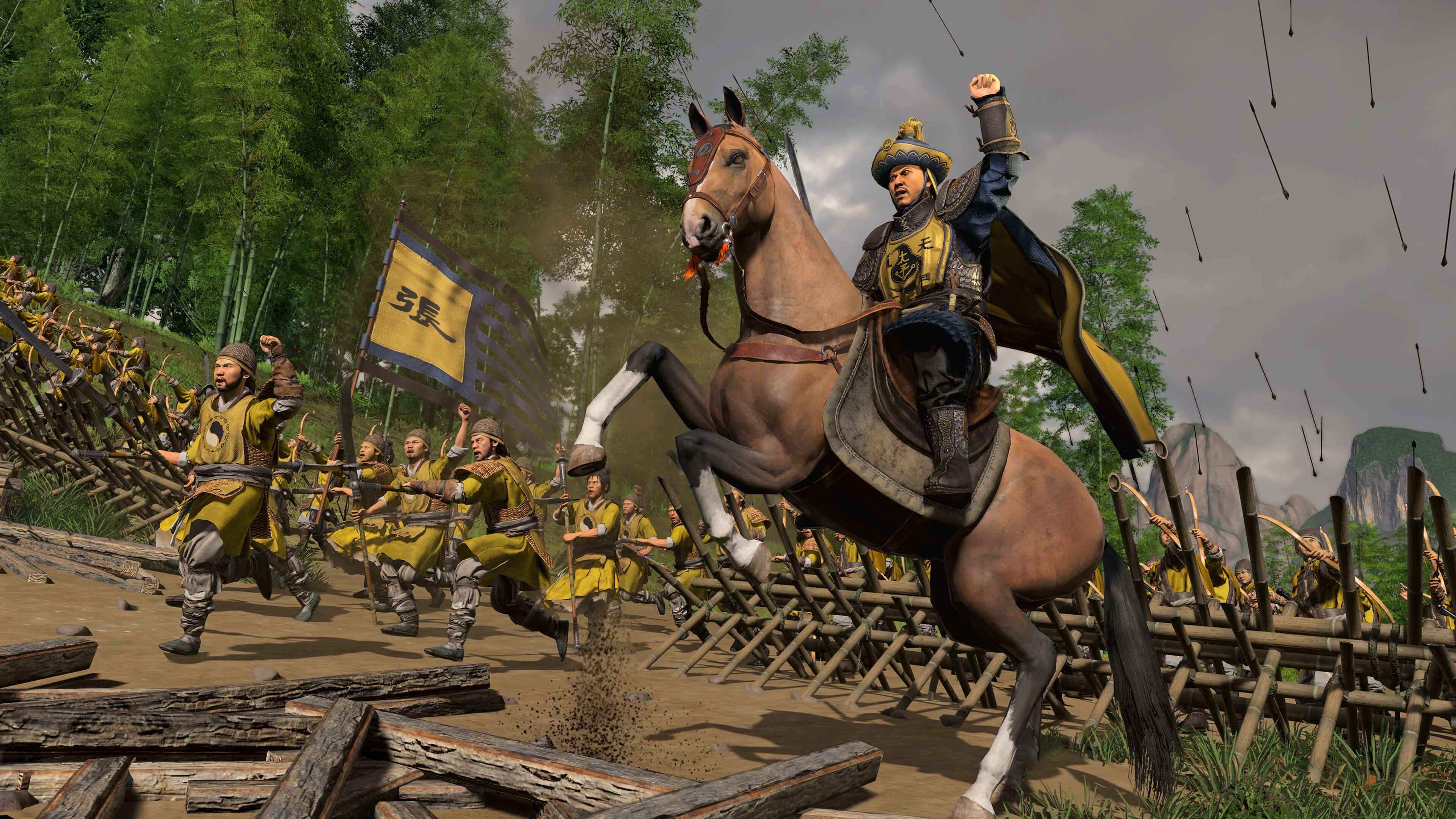 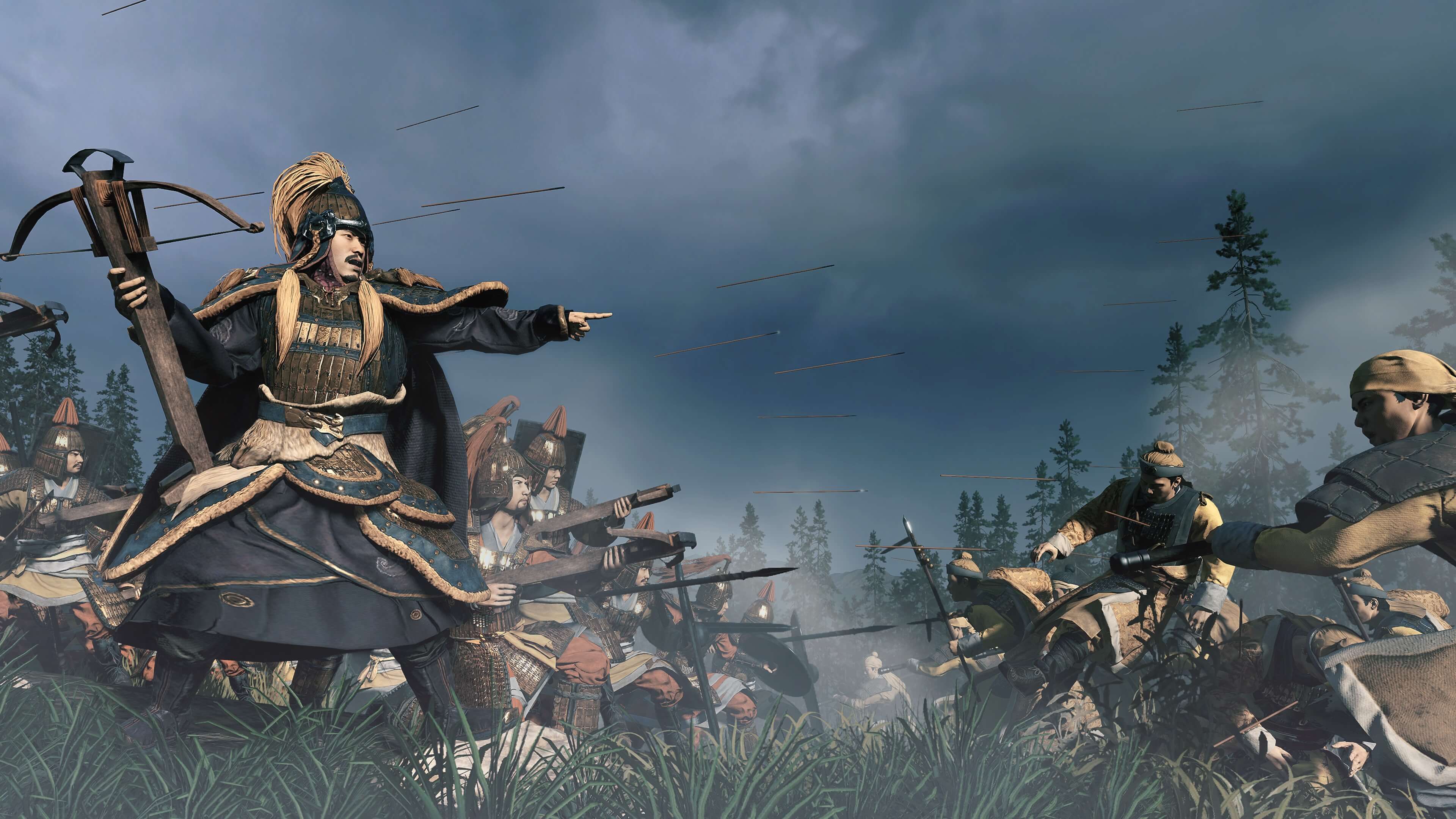 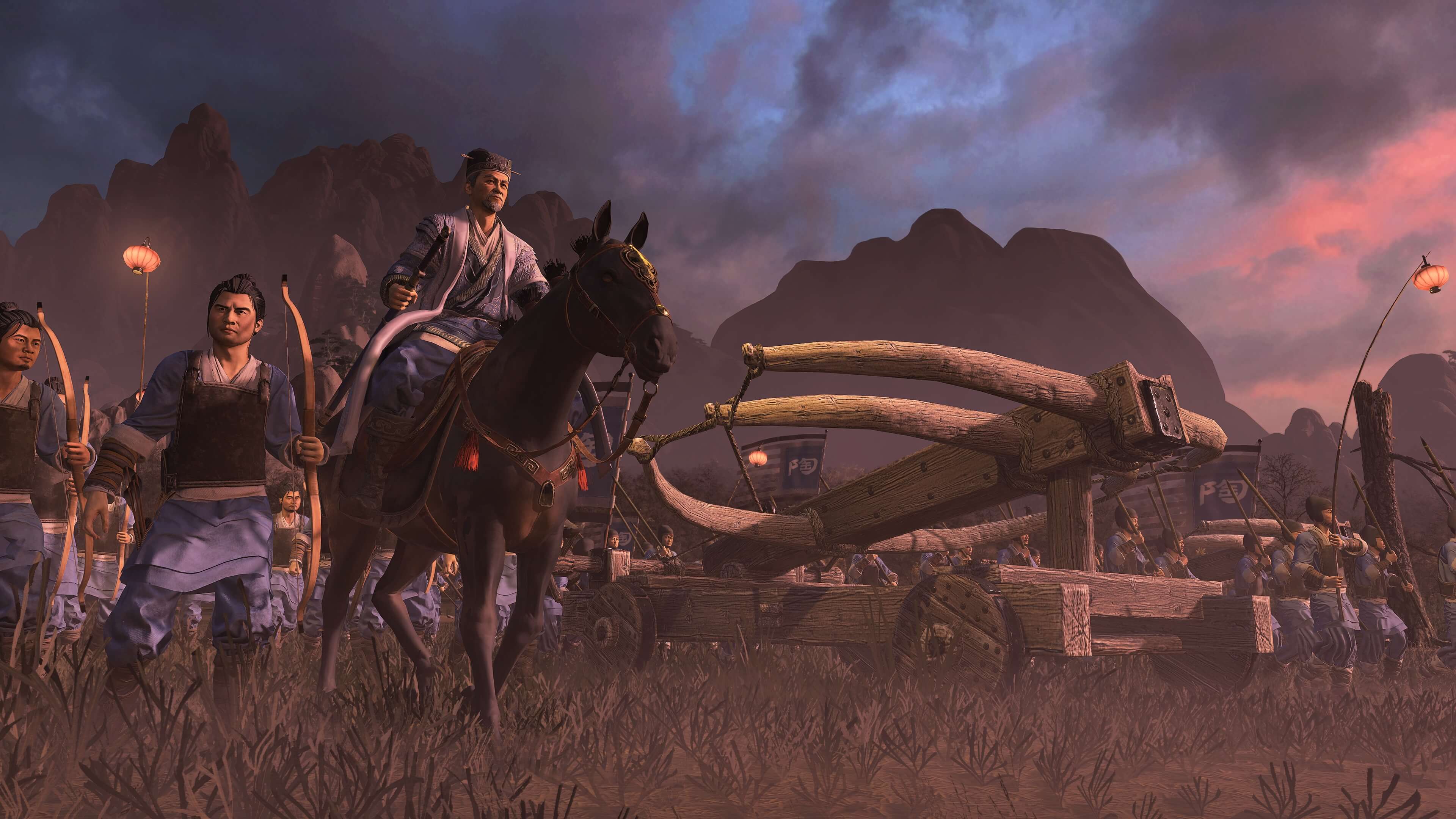 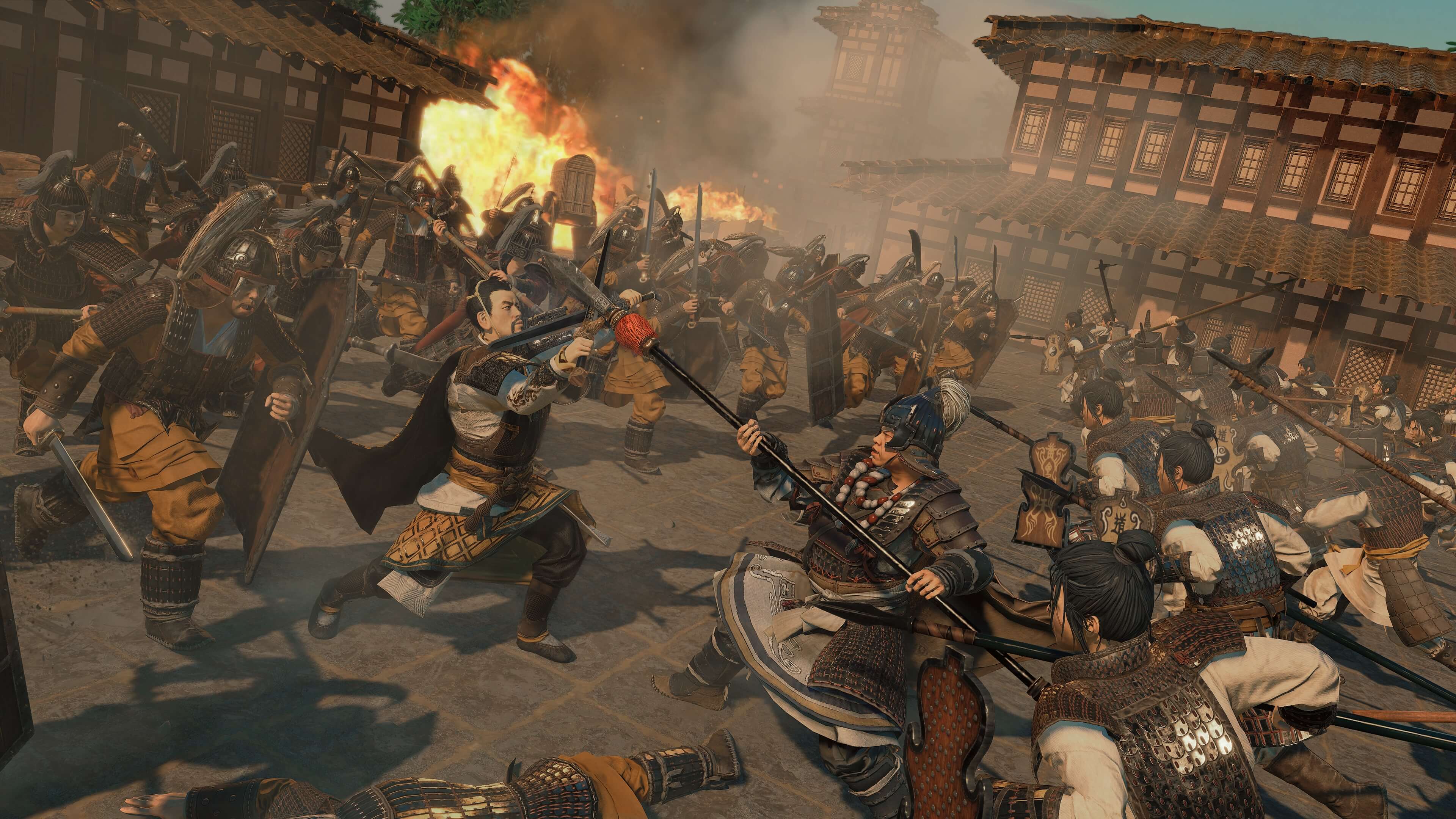 - The largest and most detailed Total War: THREE KINGDOMS DLC to date

The year is 182CE. The Han Empire is in turmoil, and China is slipping towards chaos. The Emperor’s court is paralysed by corruption, and a great famine has ravaged the north. In the eyes of the people, Emperor Ling has lost the Mandate of Heaven – and with it, the right to rule.

Across the land, the people band together in opposition. Led by the three Taoist brothers Zhang Jue, Zhang Liang and Zhang Bao, they don yellow turbans and take up arms. Their aim: to tear down the unjust Han and replace it with their own dynasty of harmony and peace. They are thousands strong, with more flocking to their cause by the day.

Warlords sworn to the emperor rally to his banner; warriors of great influence and fierce ability. Yet the wiser, more ambitious of them harbour their own desires… if the Han becomes too weak, who then will take the reins of power?

The Total War: THREE KINGDOMS – Mandate of Heaven Chapter Pack depicts the events of the Yellow Turban Rebellion, enabling players to engage in the conflict from either rebel or loyalist perspectives. Introducing a number of new characters and playable faction leaders, the campaign begins in 182CE, but players can choose to continue well into the Three Kingdoms period, with familiar characters entering the campaign as the timeline progresses.

As part of the free Total War: THREE KINGDOMS game update for all players which activates when Mandate of Heaven launches, Han Chinese factions may adopt the new Empire government style (Emperor Ling of course has this from the outset of the campaign).

The Emperor and his allies are in an alliance where the Emperor holds total power. The Emperor has mandated powers to prevent his allies from voting on diplomatic deals such as war and peace. However, as this is effectively an abuse of power, such actions may cause schisms in the alliance…

In Mandate of Heaven, Liu Hong (Emperor Ling) has a unique form of this Empire government style, in that he must request these mandated powers from his imperial allies in order to battle the Yellow Turban threat. In addition, he may also construct the Imperial Palace, a grand undertaking in both time and resources, which delivers powerful factionwide bonuses to the Emperor, and houses the single most powerful garrison in the game!

The victory conditions of all Han factions match those of the 190CE campaign. Timing in this period is crucial however, given the power-blocs in play. It’s very much about picking your moment to start your race for the throne and finding rebel-held commanderies to attack opportunistically. The only exception is Liu Hong (Emperor Ling), whose victory conditions will change depending on how he reforms his government.

Liu Hong is Emperor of the Han Empire, and presides over a swiftly deteriorating situation. Rebellions are rising and there is discontent amongst his own vassal warlords. His court is controlled by corrupt and self-serving eunuchs who are quick to silence any who question them. The formidable Empress, his wife, fights tooth-and-nail against the eunuchs’ power-grab, but her efforts are hindered by the Emperor's inaction. The vast Han vassal lands are Liu Hong’s to maintain, but the situation is rapidly falling apart, and controlling all of them may be impossible as discontent and open warfare erupt…

Within the Imperial Court, three factions vie for supremacy.

- The Bureaucrats: Led by the eunuchs, their supporters seek to centralise power into the hands of the politicians.

- The Warlords: Supporters of this group seek a decentralised government where each local leader controls their own lands, answering only to the emperor.

- The Dynasts: This group seeks all power to come from the imperial family itself.

The Emperor sits in the middle, trying to balance these power blocks. He can wield his Political Influence to enact changes within a court that has been all but crippled by the eunuchs’ power-grab…

- Very high levels of political influence can be expended to annex entire factions within the Empire.

Liu Chong is the Emperor's kin, but not heir to the throne. Unlike his family, he is happy to focus on managing his land. The people he governs love him, due to a combination of his own bold personality and his skill in battle. He is determined to make his holdings a place of peace and prosperity for any and all who wish to seek haven there. He feels confident that his imperial kin will get the situation under control, and whilst he will defend them, he is more concerned with keeping his people and his territory safe. Owners of Mandate of Heaven will also be able to begin a campaign in 190 CE as Liu Chong, and his historical conflict with Yuan Shu.

Liu Chong has a unique resource called fortitude. This rises as he fights battles, and confers a suite of increasingly powerful military bonuses for his troops.

By achieving a proscribed series of feats in battle, Liu Chong can unlock trophies which grant unique bonus effects. Liu Chong can choose a limited set of trophies to display in order to gain these bonuses.

One of the most preeminent scholars of the Han Dynasty, Lu Zhi made a name for himself as an excellent teacher, with such students as Liu Bei and Gongsun Zan studying under him. He was a pivotal figure during the Yellow Turban rebellion, leading many successful assaults against the rebels. While a master of scholarship and the sword, he was less prepared to compete with the Eunuchs.

By achieving a prescribed series of civic feats, Lu Zhi can collect a range of unique works to populate the library. Up to five works can be displayed at any one time with each work offering unique bonuses. Some works belong to sets and offer further bonuses if displayed together.

The three Zhang brothers, architects of the Yellow Turban Rebellion, each get unique missions to energise the movement. Some of these missions will improve their own factions, whilst others will enhance their allies. A few missions may even bring you into contact with faces old and new...

Zeal represents the flames of rebellion, which must be stoked for the rebellion to succeed. This resource is shared across all three Zhang brothers’ factions, but depletes over time. As Zeal falls, the rebellion can falter, causing your counties to rise up in favour of the Han cause. Zeal is maintained by capturing counties and fighting battles.

Fervour represents the rising support of the common people for the rebellion, and the growing instability this causes the Han. Fervour increases in a region due to the presence of Yellow Turbans forces and buildings, causing increasingly punitive public order penalties for Han factions. At high levels, fervour begins to cross boundaries and affect adjacent regions. Han factions can mitigate the Yellow Turbans’ Fervour by improving their public order infrastructure and capturing nearby Yellow Turbans counties.

All followers of the Way of Supreme Peace are united in a common goal: overthrowing the Han Empire. The flames of rebellion will not be quenched until this goal is achieved!

Some turns into the campaign the Mandate War will commence in earnest, driving the Yellow Turbans and the Han into relentless conflict. Victory in this war is the ultimate victory for the Yellow Turbans, and they must capture 50 regions or Luoyang itself.

A renowned healer in his native Julu commandery, Zhang Jue is known as the General of Heaven. His discovery of the Scriptures of Great Peace, detailing the connection between heaven and earth, have set him on the path to raising a righteous rebellion against the corrupt Han Dynasty. Zhang Jue has mustered his brothers and their followers to his cause and sparked a flame in the hearts of the people.

Zhang Liang, the General of the People, is an artisan of defensive strategies. As such, his aim is to build an impregnable defence against the Han as they attempt to stamp out the rebellion. In fact, the Han warlord Lu Zhi has been dispatched with precisely this directive, and Zhang Liang has been tasked with defending against him. The result of this clash could dramatically shift the balance of power!

Known as the General of the Land, Zhang Bao hones naked aggression into a force for change. He forms the spear-tip of the rebellion, hurling himself boldly into the fray. He seeks to rapidly expand the rebels' sphere of influence and is in the best position to achieve this.

*+Other Factions also playable in Mandate of Heaven+*

You can also play this campaign from the perspective of several notable Three Kingdoms characters, each of whom has unique start-positions and missions reflecting their early (and in one case, deeply humble!) beginnings:

In the Mandate campaign, a faction’s armies may now recruit troops when in non-hostile territory, even if they own no regions. Units and retinues may be recruited, but new armies may not be formed.

As time passes in the Mandate of Heaven campaign, notable factions from the 190 CE campaign will begin to emerge according to key historical conditions. For example, Yuan Shao may appear, but only if The Emperor is deposed, while Zheng Jiang will begin to terrorise the northern Commanderies around 189 CE.

With 40 new units available, playable factions get a range of new options for recruitment. Here you’ll find a list of some of the most notable elite units.

The elite Imperial Army of the Han Empire, these units represent all five elements of the Wu Xing, and are all heavily armoured. All Imperial units have a unique ability granting them increasing armour and damage bonuses while fighting as long as another Imperial unit is nearby.

Heavily armoured Crossbow Infantry, ready to switch to shield and spear in defence of their emperor.

Zhang Jue's messengers bear forth his prophecies and instructions. These very fast, unarmoured, fear-causing melee cavalry have good morale and are Ideal for chasing missile infantry down, killing them swiftly and moving on before others arrive.

Zhang Bao’s all-purpose infantry, equipped with two-handed polearms. Their unique ability improves their combat prowess over time at the front of the unit, though they become more vulnerable to the flanks and rear.

Zhang Bao’s Archers, armed with poisoned arrows. They can be deployed outside of the regular deployment zone before battle commences, and can only be detected from up close. They are deadly while they remain hidden, but the enemy must be kept at arm’s length as they will fall swiftly in melee.

Zhang Liang’s Shock Cavalry, they have a very hard-hitting charge, and a unique damage bonus when fighting heroes and generals.