The Desert Kingdoms Culture Pack introduces four new playable factions to Total War: ROME II. The Kingdoms of Kush, Saba and Nabatea fall under the African/Arabian subculture, while the Masaesyli are of Numidian origin. These factions are native to the deserts of Africa and Arabia. 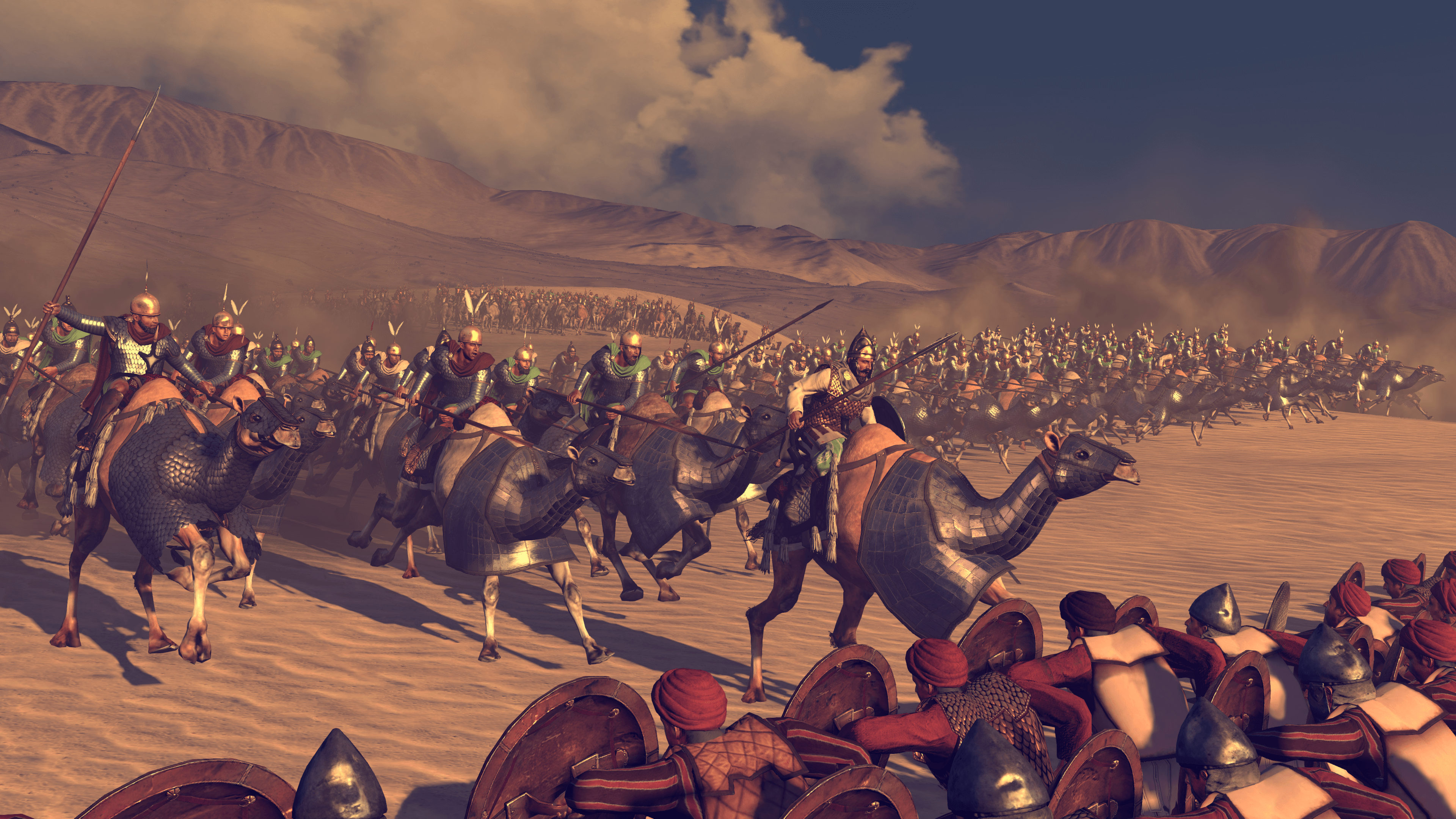 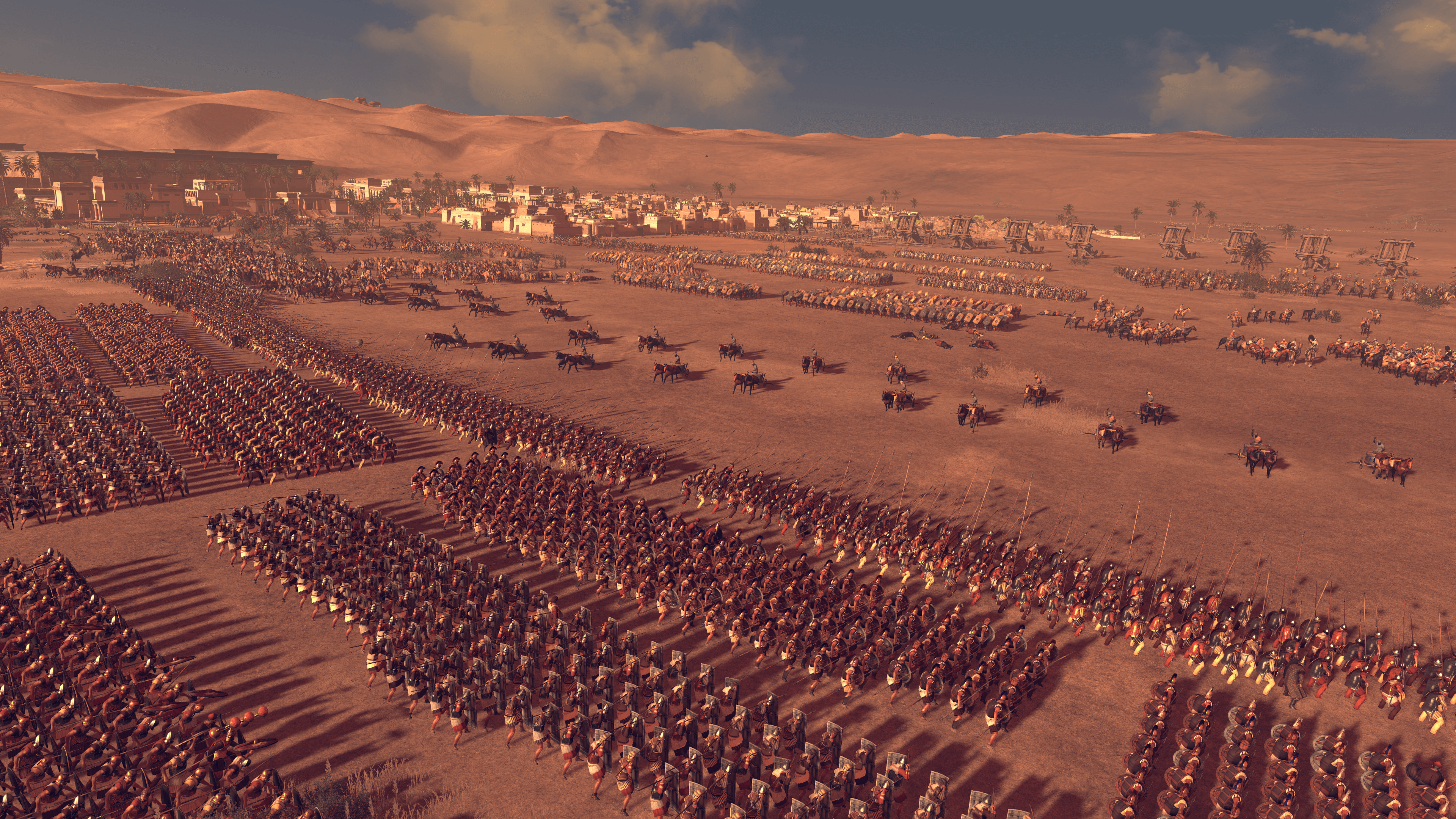 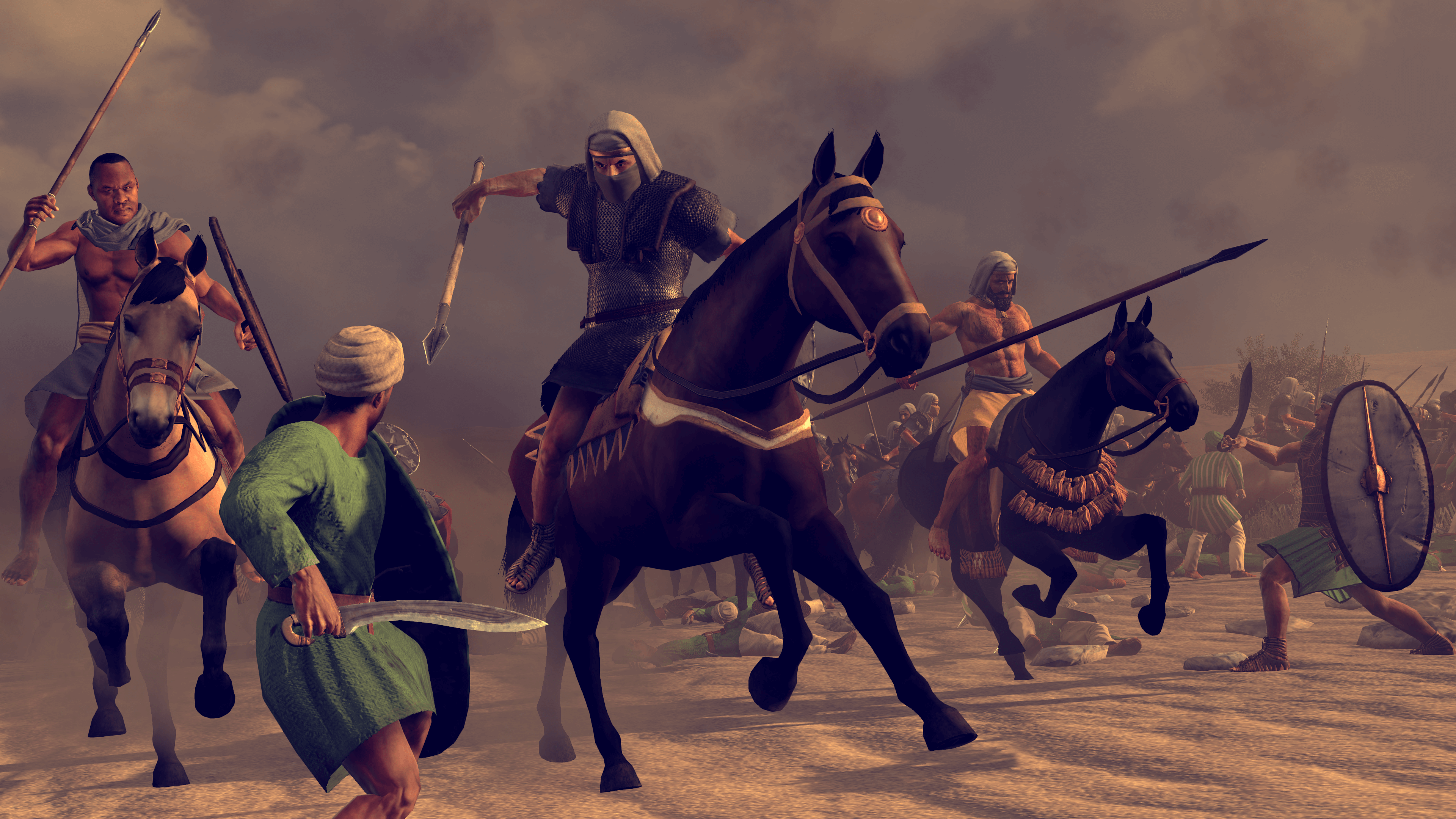 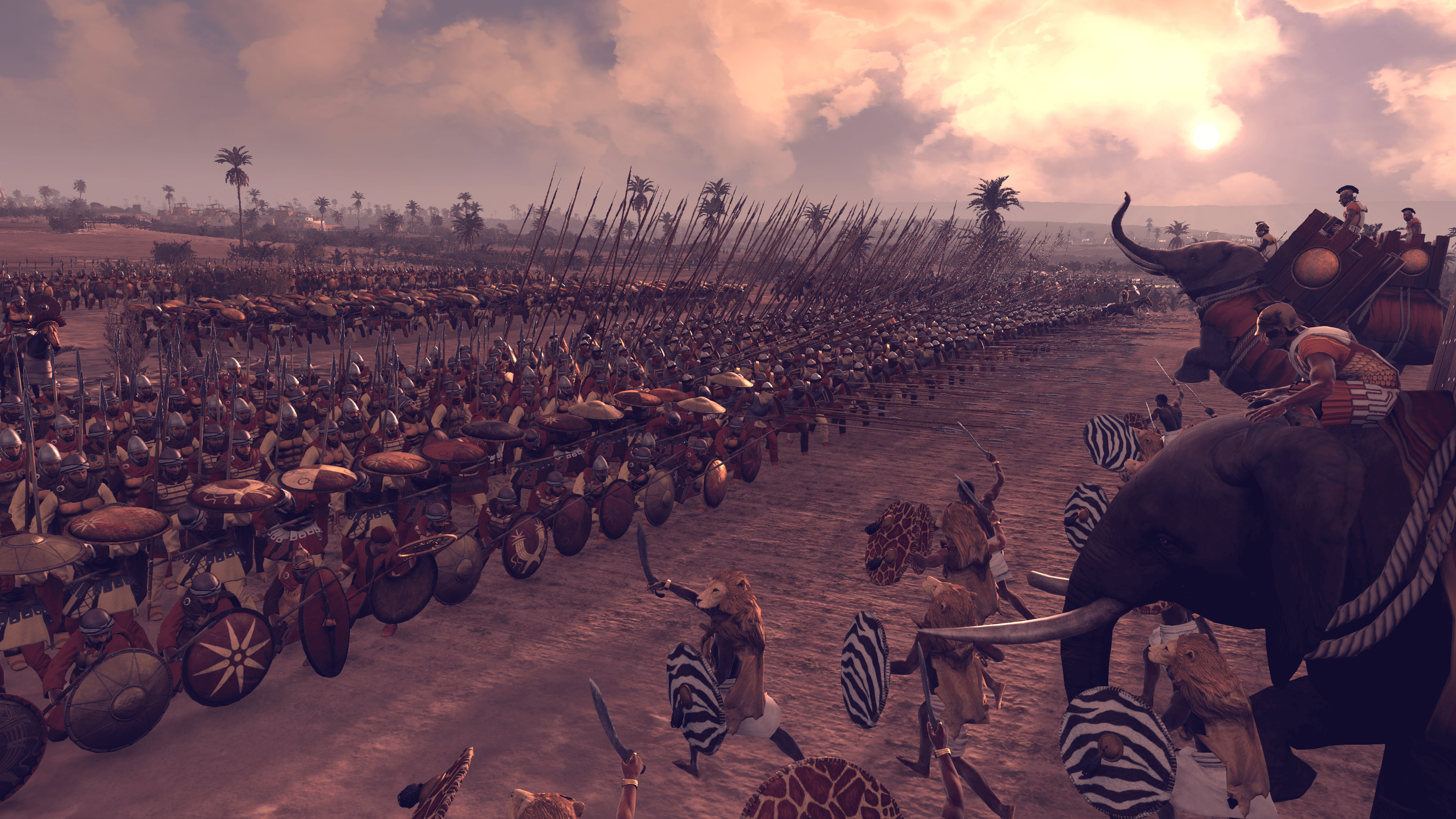 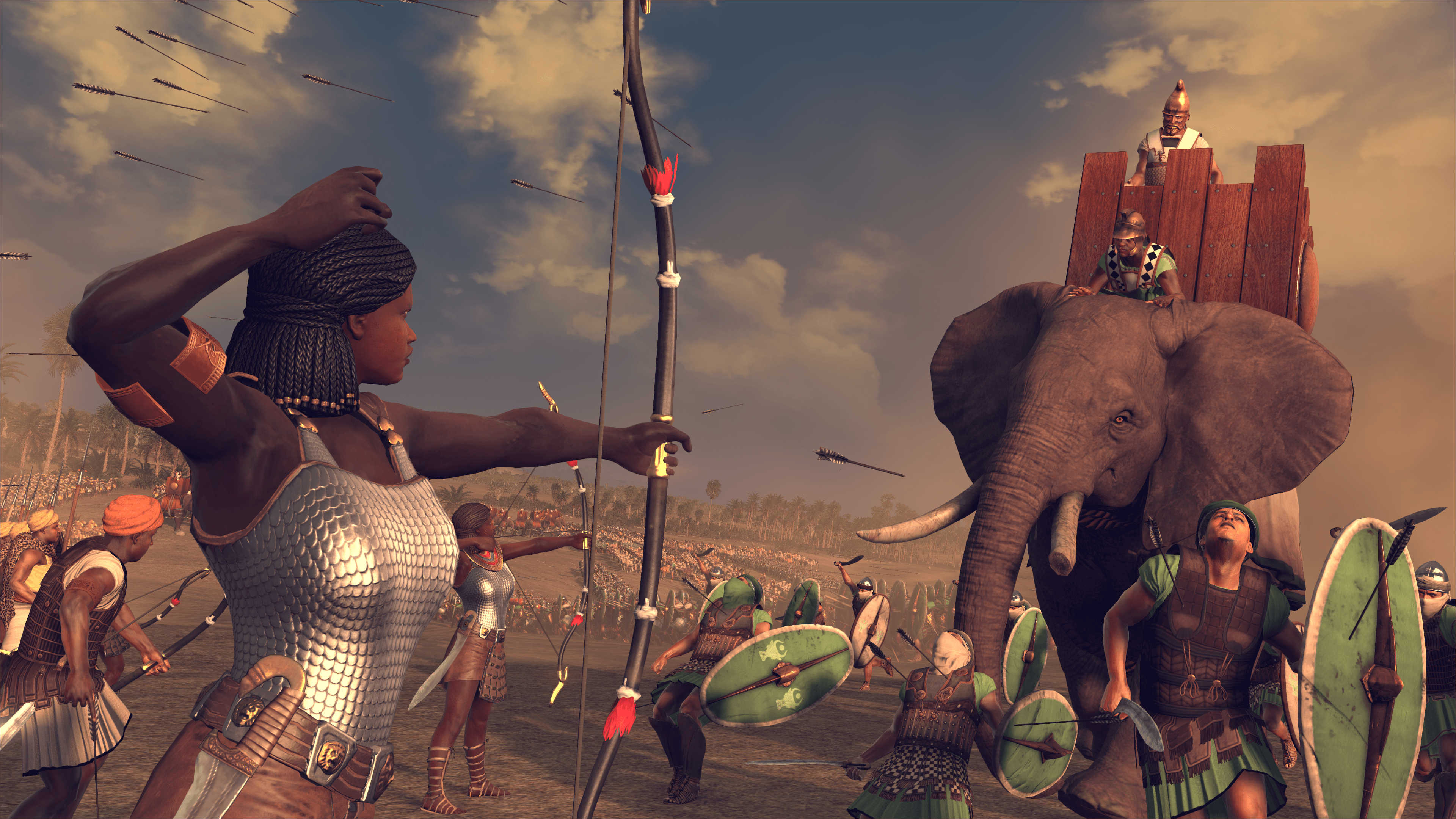 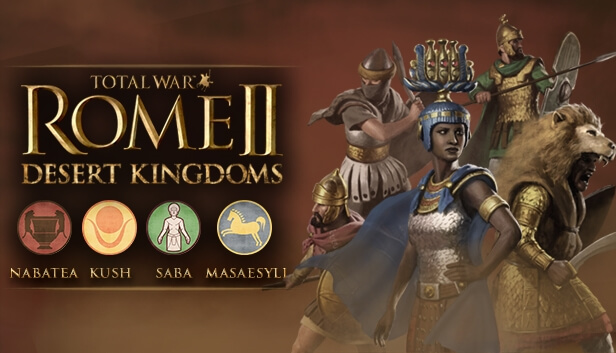 The Desert Kingdoms Culture Pack introduces four new playable factions to Total War: ROME II. The Kingdoms of Kush, Saba and Nabatea fall under the African/Arabian subculture, while the Masaesyli are of Numidian origin.

These factions are native to the deserts of Africa and Arabia. Surviving these harsh environmental conditions has forged them into hardy warriors who use the shifting desert sands to their advantage in battle.

Alongside their individual Faction Traits, the Desert Kingdoms all share the following Cultural Traits:

Desert Warriors: Bonus to morale in desert battles and bonus income from agriculture

*Meroe (The Kingdom of Kush)*

A major regional power with vast resources derived from its trade in gold, jewels and exotic hides, Kush has been overshadowed by its more powerful and famous northern neighbour, Egypt.

In the early 3rd century BC, king Ergamenes decided to wrest power away from the priests of Amun, and moved the capital from Napata to Meroe. The priests would no longer decide the fate of the kings and queens.

The shift of capital also marked something of a break from Egyptian culture with Hellenistic, Indian, Persian and African influences making their way through the trade routes. The kings and warrior queens would sit on the throne and rule with authority and conviction to protect the riches of Nubia. Even the Romans could not conquer Meroe, and preferred to trade instead.

A regional powerhouse with a surfeit of natural treasures and fertile land, Kush is well equipped to prosper and once again vie for power against the mightiest empires in the world.

- The Land of the Bow: cheaper, better archer units.

The Nabataeans were great builders and pioneers of advanced construction techniques. They were the first civilization to use cement extensively, and built remarkable watertight reservoirs, ensuring a plentiful supply of potable water. Even when under threat from powerful foes like the Seleucids and Judeans, their progressive society enabled them to flourish and prosper.

The Nabataeans were very literate and had a remarkable degree of gender equality for an ancient civilization, with women participating in both political and religious matters. Nabatae was an important crossroad for the spice trade, serving as a conduit between the southern kingdoms that produced frankincense and myrrh, and the wealthy eastern and western empires who were its primary buyers.

Preserving all this wealth at such a geographically strategic location demanded a well-trained military and a strong navy. Nabatae had both, bolstered by excellent engineering and exploitation of the surrounding environment, making their capital city of Petra a nigh-impregnable bastion.

- Roman tactics: some native units may use Roman army formations/abilities

The Sabaean kingdom lies in the harsh lands of the southern Arabian Peninsula. Even in such inhospitable conditions, however, these ingenious people thrived. They built dams, invented new irrigation techniques and became masters of water-efficiency. The Sabaeans were also excellent sailors, and had strong trade relations with peoples across the Red Sea.

Not warlike by nature, the Sabaeans charged mercenaries with the protection of their trade routes and caravans. That said, they were a resilient people of tough character, who made formidable foes for anyone who dared threaten their great capital city of Marib. Even the Romans could not best them during their expedition in the early 1st century.

- Excellent use of javelins and chariots

- Agricultural and fertility bonuses from the famous Marib Dam

- Great Dam of Ma’rib: A unique building type which provides faction wide bonuses to agriculture and fertility and can be upgraded with technologies, but requires upkeep to maintain.

Prior to Numidia’s founding after the 2nd Punic war, its people were divided into two Berber tribes: the Massyli and the Masaesyli. Both were skilled warriors and there were many rivalries between them.

The Massyli had strong relations with Carthage, a key reason for the Massaesyli aligning with Rome when the opportunity came. Through many twists and turns, both tribes ultimately unified into theK kingdom of Numidia, under the Massylian king Massinissa. He ruled for an astonishing 54 years, transforming his kingdom into a prospering North African power.

- Affinity to Cartage and Latin culture

We look forward to sharing details for each of the faction in Total War: ROME II – Desert Kingdoms in the upcoming weeks, prior to release.