This Warband adds the Witch Hunters, with 7 new unit types and a fully playable campaign featuring unique Dramatis Personae, High Capitular Wilhelm Krieger. Amidst the rivalries and violence that splits the Empire, sinister forces creep back into the lands of men. 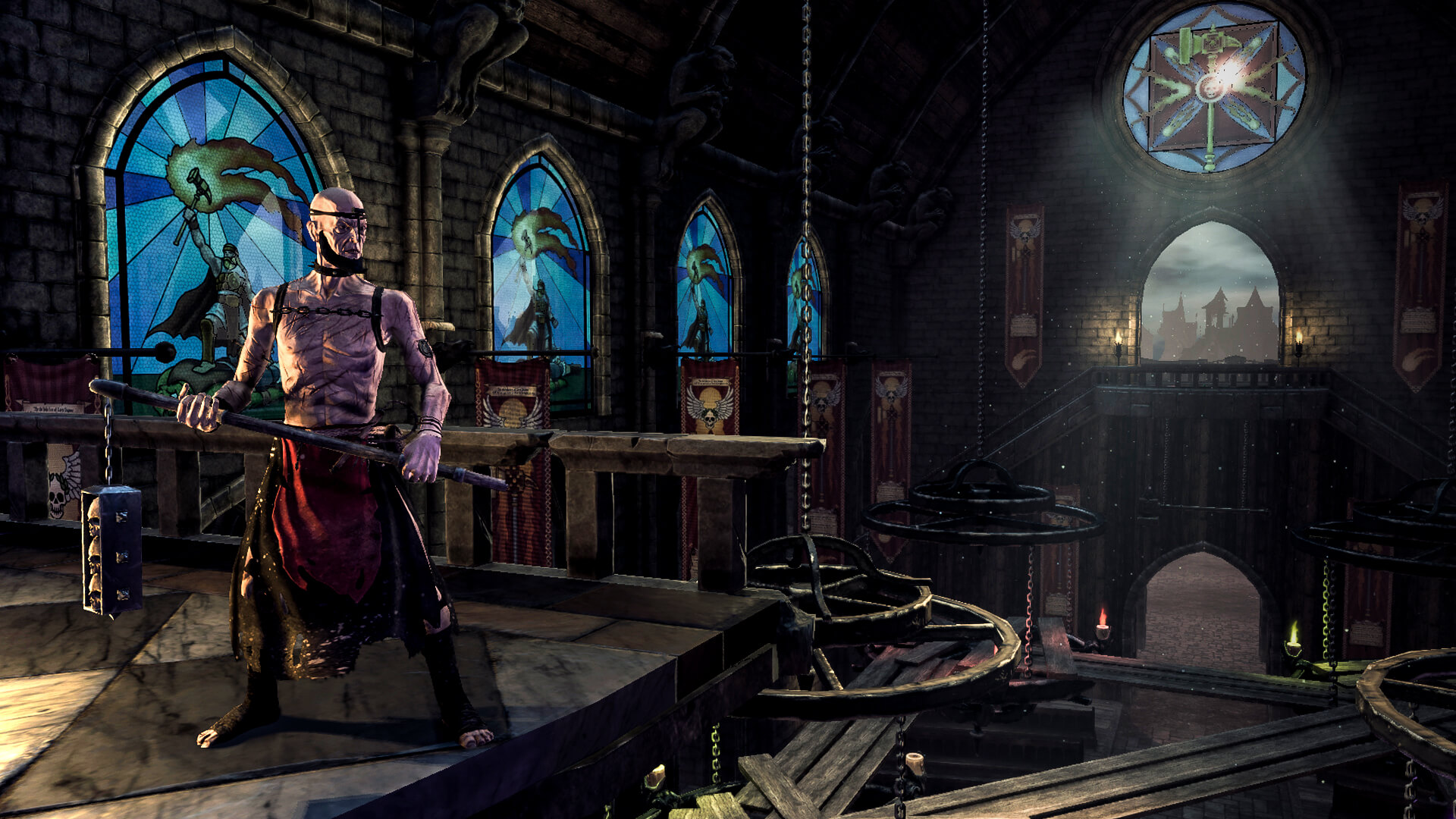 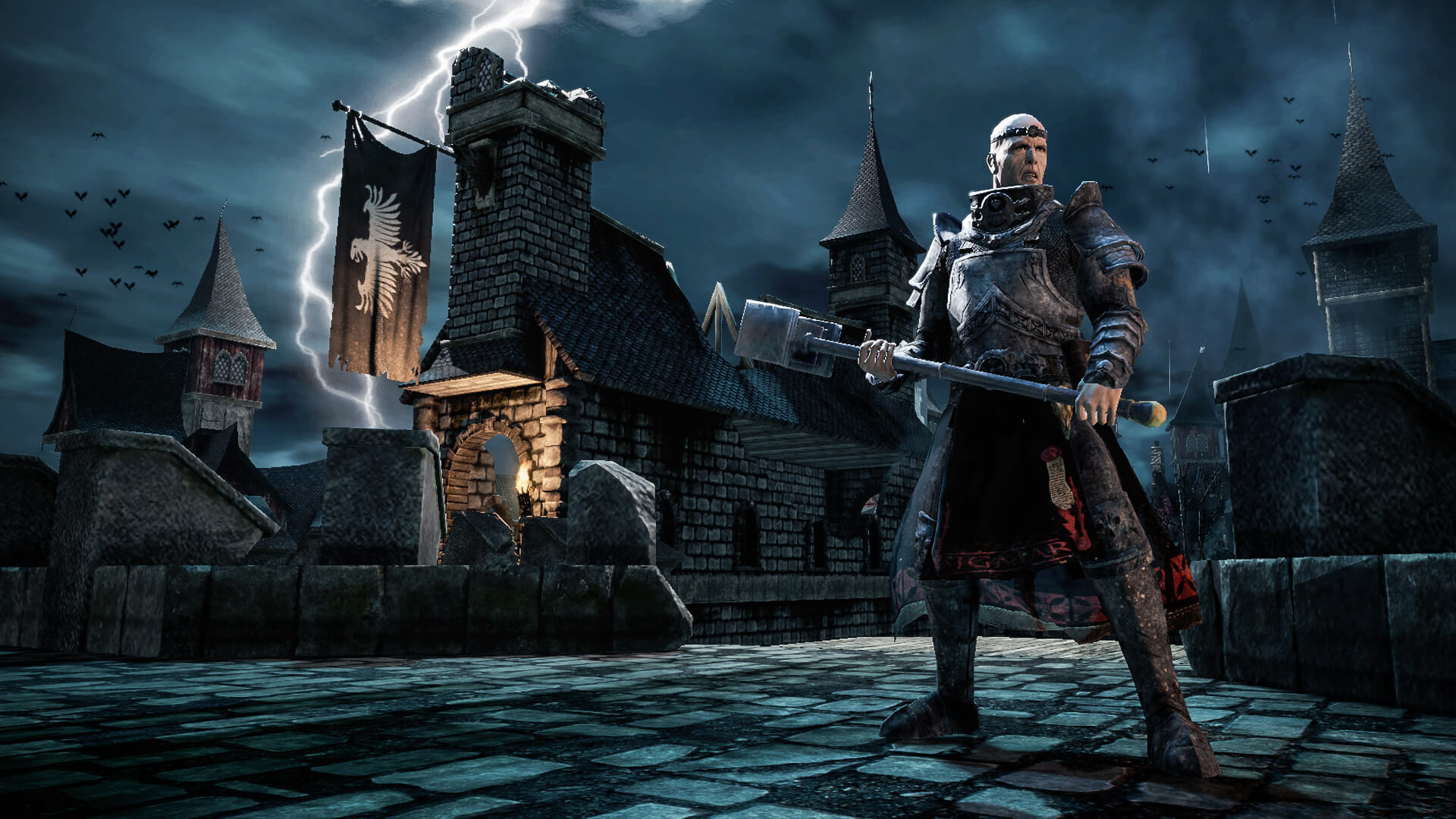 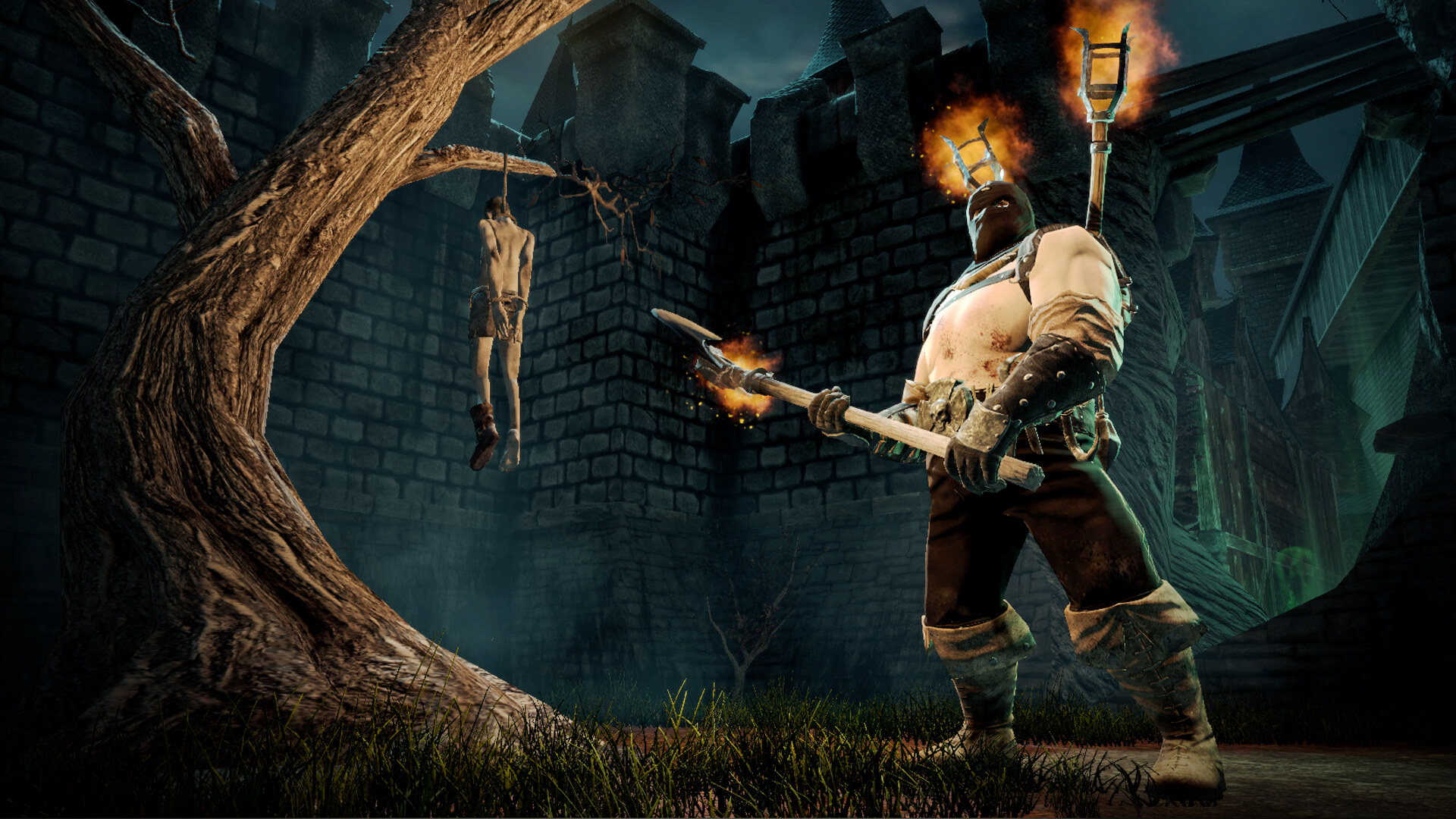 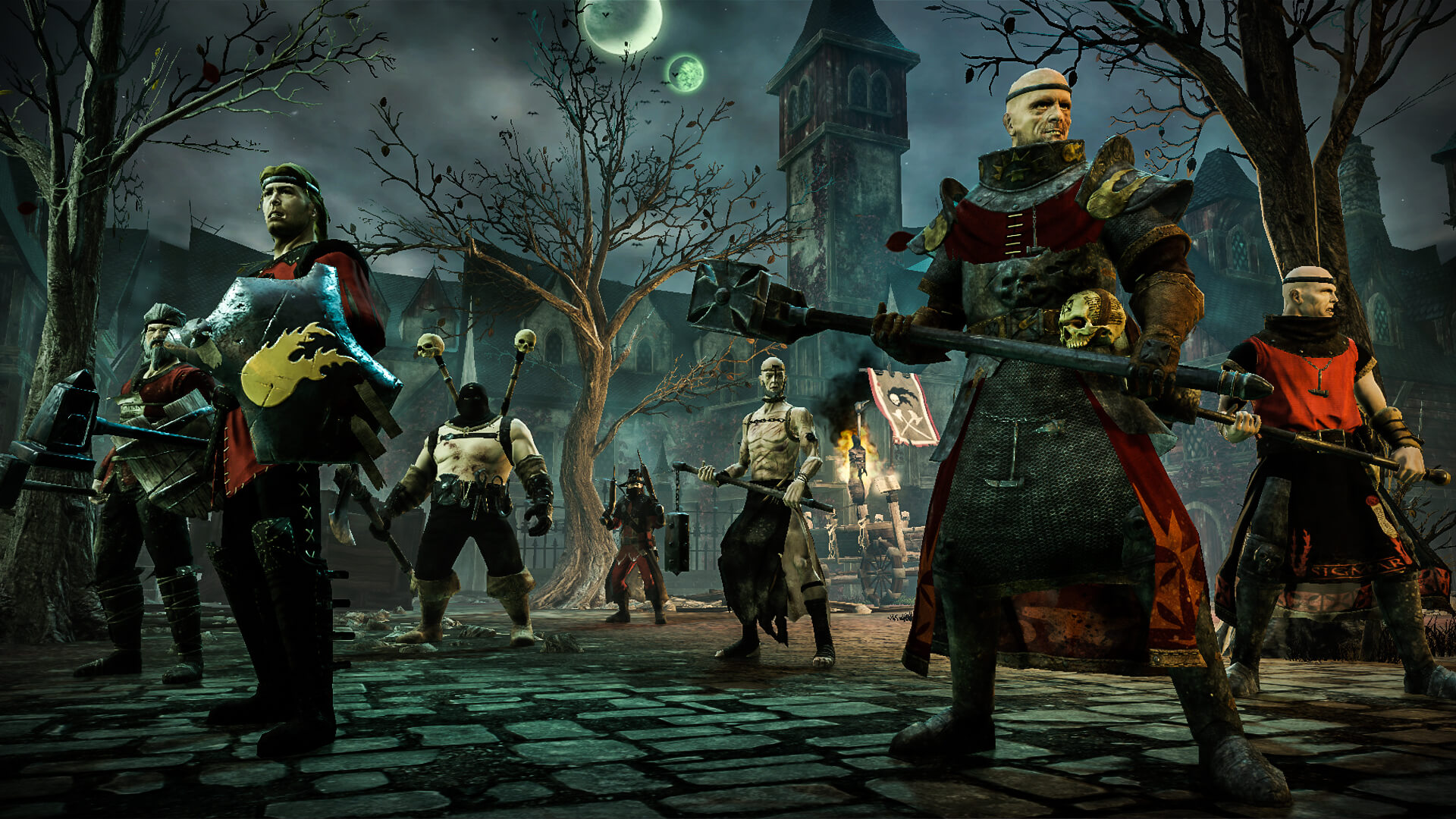 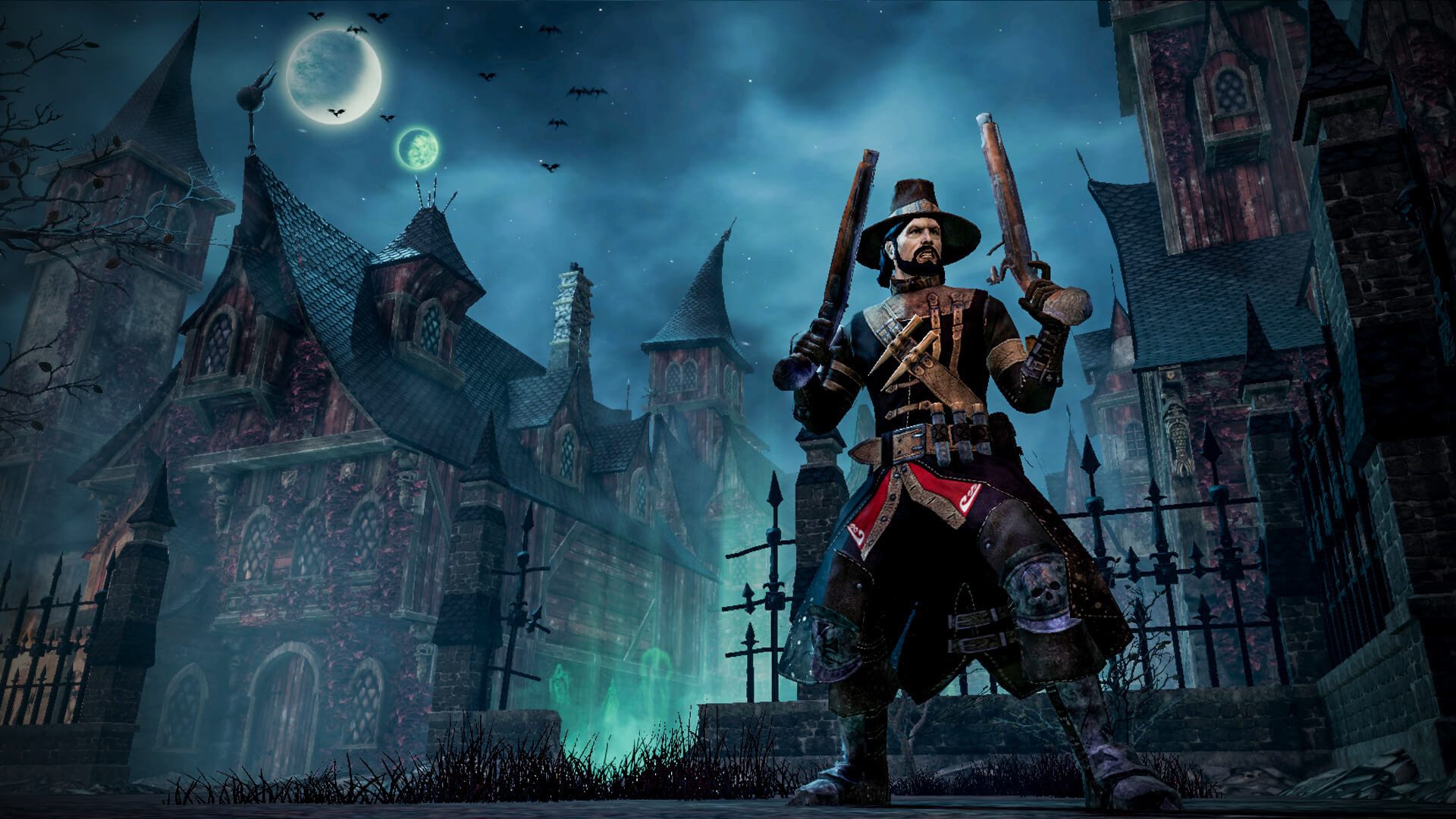 Amidst the rivalries and violence that splits the Empire, sinister forces creep back into the lands of men. Against these evils stand the Witch Hunters, remorseless warriors in service to the Temple of Sigmar. The witch practicing her fell magic, the mutant spreading its corruption of flesh, the necromancer violating the sanctity of the grave, the daemon seeking to possess souls – these are the foes of the Witch Hunter. The Witch Hunters will allow nothing to make them waver in their defence of mankind against these evils. They are the Templars of Sigmar, and with sword and fire they will return their god’s justice to Mordheim.

The leader of each band of Witch Hunters bears a commission from the Grand Theogonist himself, sanctioning whatever action the Captain deems necessary. Those entrusted with such authority are chosen for their unswerving faith and zeal, as well as their tactical acumen and swordsmanship. Any who dare oppose a Witch Hunter Captain will be summarily executed… with the Temple of Sigmar’s blessing.

Sigmar's Aegis: The warrior has a natural Magic resistance bonus of 20%.

Hunter's Patience: After a successful Dodge attempt, reduces the cost of a Counter-Attack performed in response by 1 Offense Point.

Their minds unhinged by the conviction that the End Times are upon the Empire, Flagellants are fanatical madmen who wander the roads and byways of the provinces. They preach their apocalyptic visions wherever they go, scourging their own bodies with barbed whips and heavy chains in acts of ghastly self-mutilation. The crazed devotion that gives Flagellants purpose likewise makes them terrifying warriors in battle, hurling themselves upon foes in a frenzy of slashing flails. Many Flagellants have been swayed by the sermons of Witch Hunters, joining their warbands in a holy crusade to cleanse Mordheim and restore Sigmar’s grace to the land.

No Talent: This unit cannot buy the ‘Lad’s got talent’ skill.

Fanaticism: Grants immunity to All Alone, Fear and Terror tests.

The grim Witch Hunters are renowned for their determination and courage even as they are infamous for their pitiless methods and merciless justice. Typically, these men work alone, travelling the villages and towns to root out Chaos cults and witches, but the scope of corruption infesting Mordheim has drawn packs of Witch Hunters to it, banding them together under the authority of Witch Hunter Captains.

Sigmar's Ward: The warrior has a natural Magic resistance bonus of 10%

Purge the Heretic!: When dealing melee damage, increases melee damage by 20% for the next attack. The next action taken must be a melee attack or skill, or the effect is lost.

Men who have suffered great losses, who had family and fortune taken from them, sometimes find that faith in Sigmar is all they have left. Casting aside the shambles of their old lives, they become Zealots - vengeful pilgrims on a quest to destroy the minions of Chaos wherever they can be found. Many Zealots were peasants or craftsmen, lacking the martial experience of mercenaries. They are, however, possessed by bitterness and rage. These are qualities that cause Witch Hunters to recruit them, harnessing their fanaticism to visit vengeance upon the evil infesting Mordheim.

Among the ranks of Sigmar’s clergy, the Warrior Priests emphasize the martial aspects of their god. Filled with a fiery fervour and an unbreakable faith, these priests are a formidable sight to the enemies of the Empire. Wielding immense warhammers that can shatter skulls and crush bones, a Warrior Priest is an imposing foe. More than their physical strength, however, it is a Warrior Priest’s devotion to Sigmar that endows him with his deadliest abilities – harnessing the divine power of his god and unleashing devastating forces against his adversaries.

Divine Spellcaster: This unit has access to some spells from Sigmar’s Prayers Tome.

Starts with the spell Immaculate Flesh, which removes all active Poison effects and increases Poison and Wyrdstone Resistance by 15%. Not stackable.

Divine Rage: When dealing melee damage, increases the Spellcasting chance of the next spell by 15%. The next action taken must be a spell or the effect is lost.

- Shield of faith: Increases Magic Resistance by 15%. Not Stackable.

- Armour of Righteousness: Grants immunity to Fear and provokes Fear on engaged enemies. Increases Armour Absorption by 10%. Not Stackable.

- Deny the Heretic: Creates a zone effect at the selected area. Entering or starting a turn inside the area inflicts a debuff that reduces current and maximum Offense Points by 1 and Melee Hit chance by 5% for 1 turn. Not Stackable.

- Immaculate Flesh: Removes all active Poison effects and increases Poison and Wyrdstone Resistance by 15%. Not Stackable.

- Word of Damnation: Reduces Magic Resistance by 10% and the chance to pass All Alone, Fear, and Terror tests by 25%. Not Stackable.

- Prayer of Absolution: Increases Armour Absorption by 5% and Dodge and Parry chance by 10%. Not Stackable.

- Healing Hand: Restores up to 40 wounds.

The younger children of noble lords or the disposed heirs of conquered domains, Templar Knights often seek a position for themselves by offering service to the temples of mankind’s gods. Those who serve Sigmar usually end up in the warband of a Witch Hunter Captain, granted the chance to prove the sincerity of their faith by giving battle to the creatures of Chaos. Armed and armoured in finery befitting their noble birth, Templar Knights are nevertheless untested warriors and their lack of experience can make them overeager in combat.

- Last Stand: This unit will never disengage or flee from melee battle, it will fight until the end. The unit is also coolheaded.

- Fearless: Immune to All Alone, Fear and Terror

Stoic: When engaged with 2 or more enemies, increases Melee Resistance by 10%. Not Stackable

Few sights are more terrifying than that of seeing an Executioner approaching his victim. Selected for their massive physiques and utter remorselessness, these sinister warriors know neither pity nor mercy. Tasked to deliver final justice to the enemies of Sigmar, an Executioner becomes inured to killing, as ready to slay in cold blood as in the heat of battle. Great two-handed swords and double-headed axes are the weapons of choice for these killers, tools with which they become quite accomplished in the course of their gory trade.

- Fire Purge: Each melee attack has 25% chances to put the enemy on fire for 2 turns, the fire damage is taken at the beginning of its turn.

- Fearless: Immune to All Alone, Fear and Terror

- Last Stand: This unit will never disengage or flee from melee battle, it'll fight until the end

Pyre of the Righteous: Places an effigy at a target location that can be destroyed by enemies. The effigy increases the chance to pass All Alone, Fear, Terror by 30%, and Melee and Ranged Hit chance by 10% for allies within 5 meters. Usable once every 2 turns. Not Stackable.