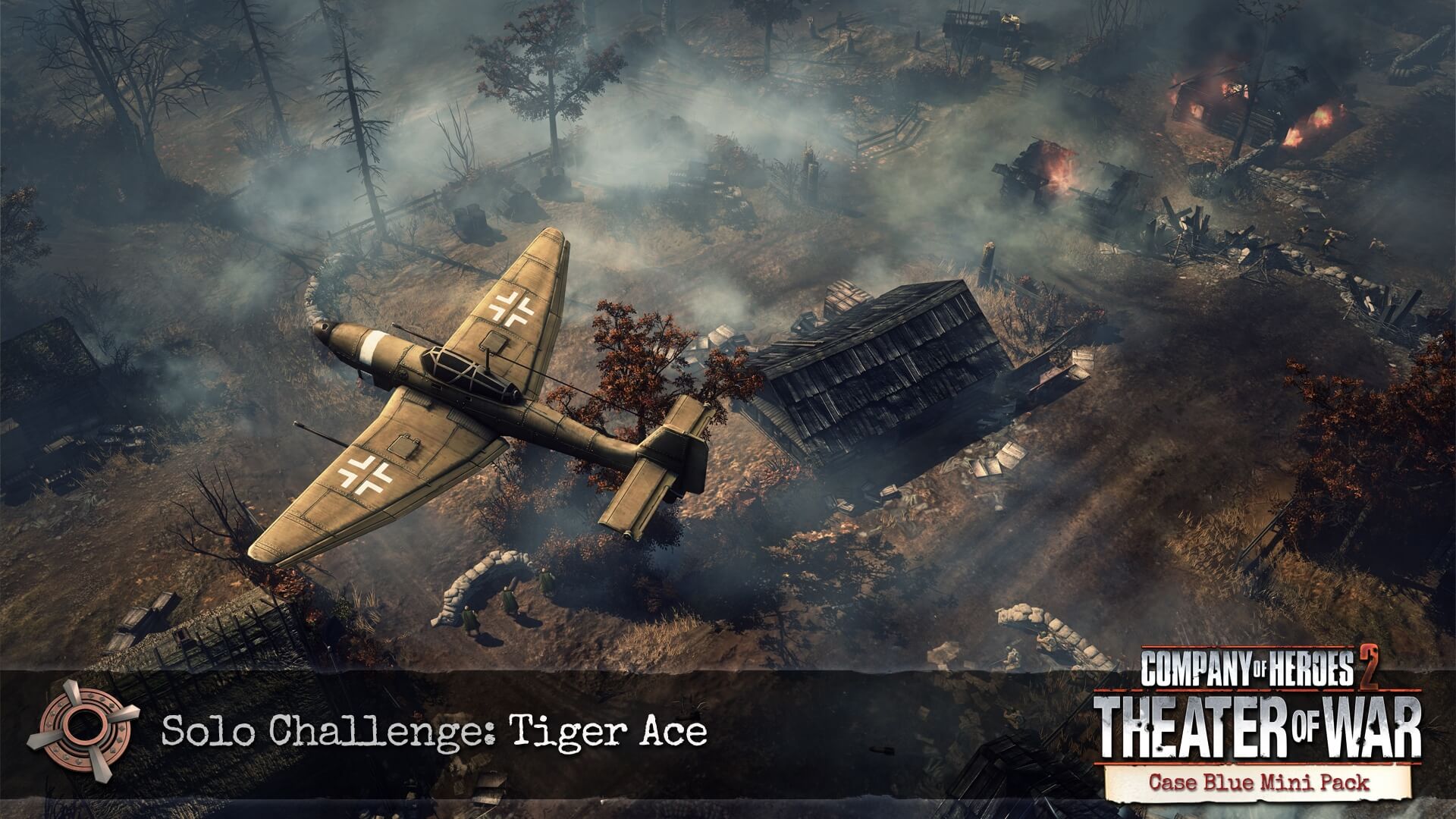 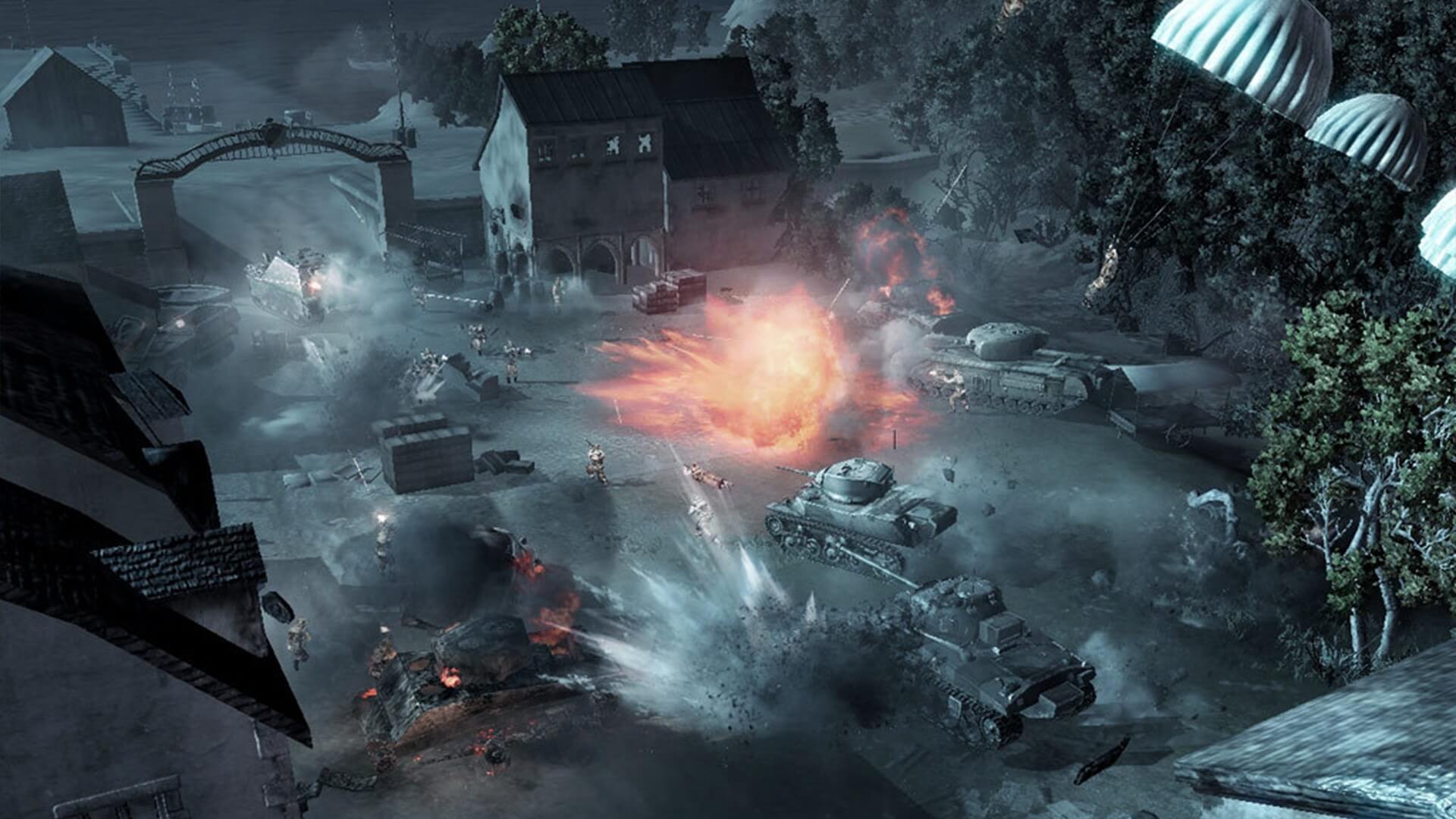 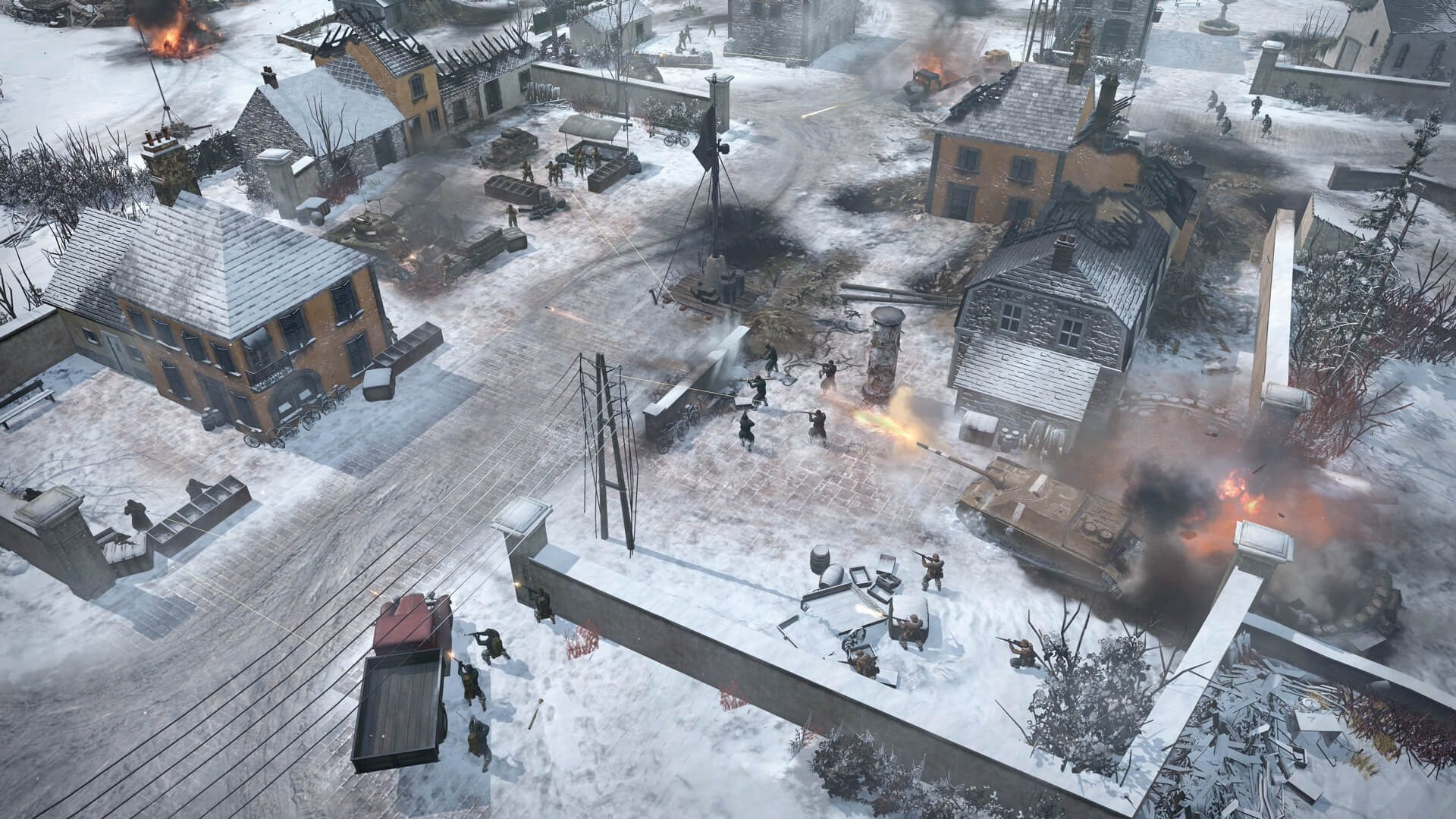 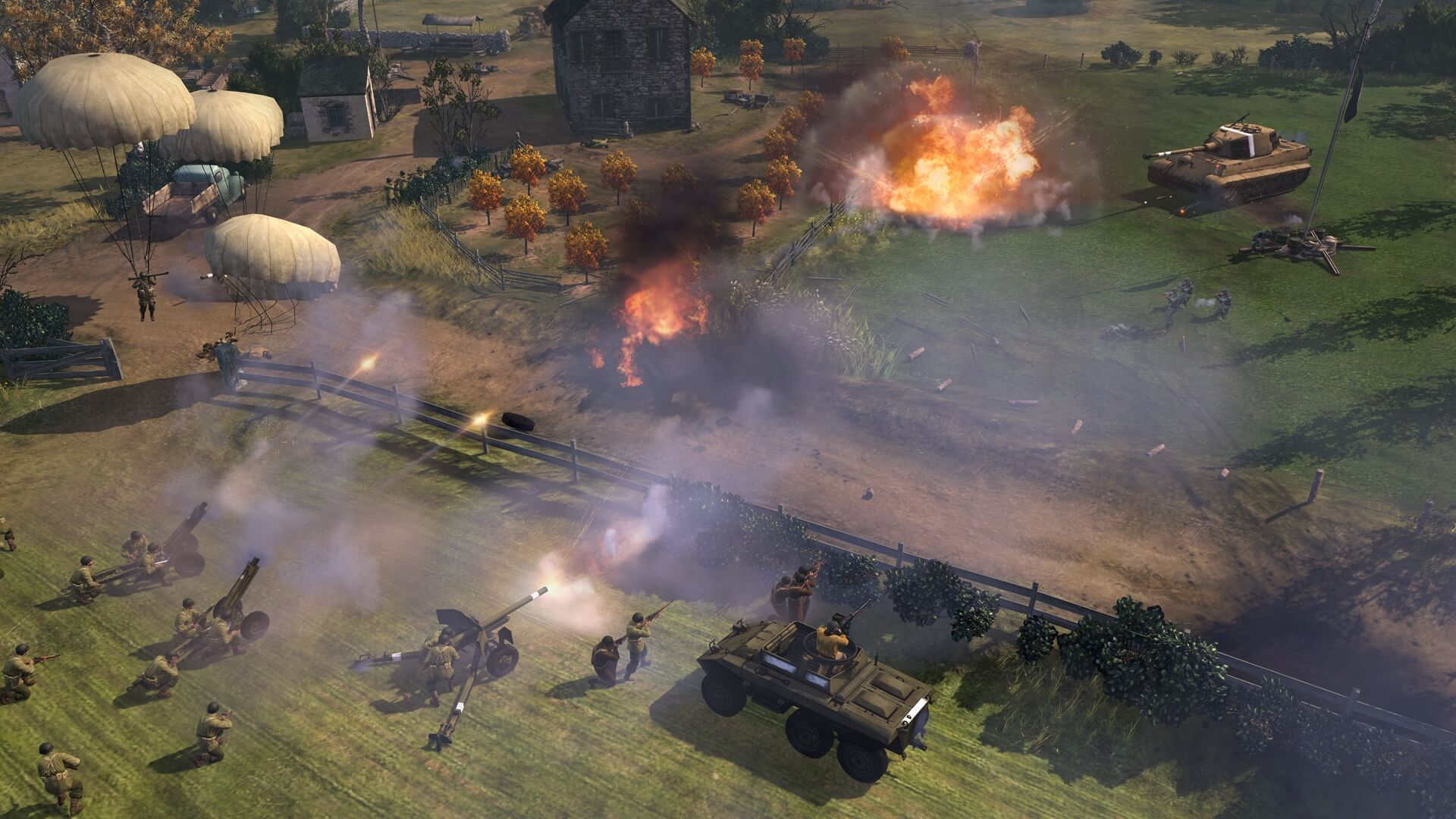 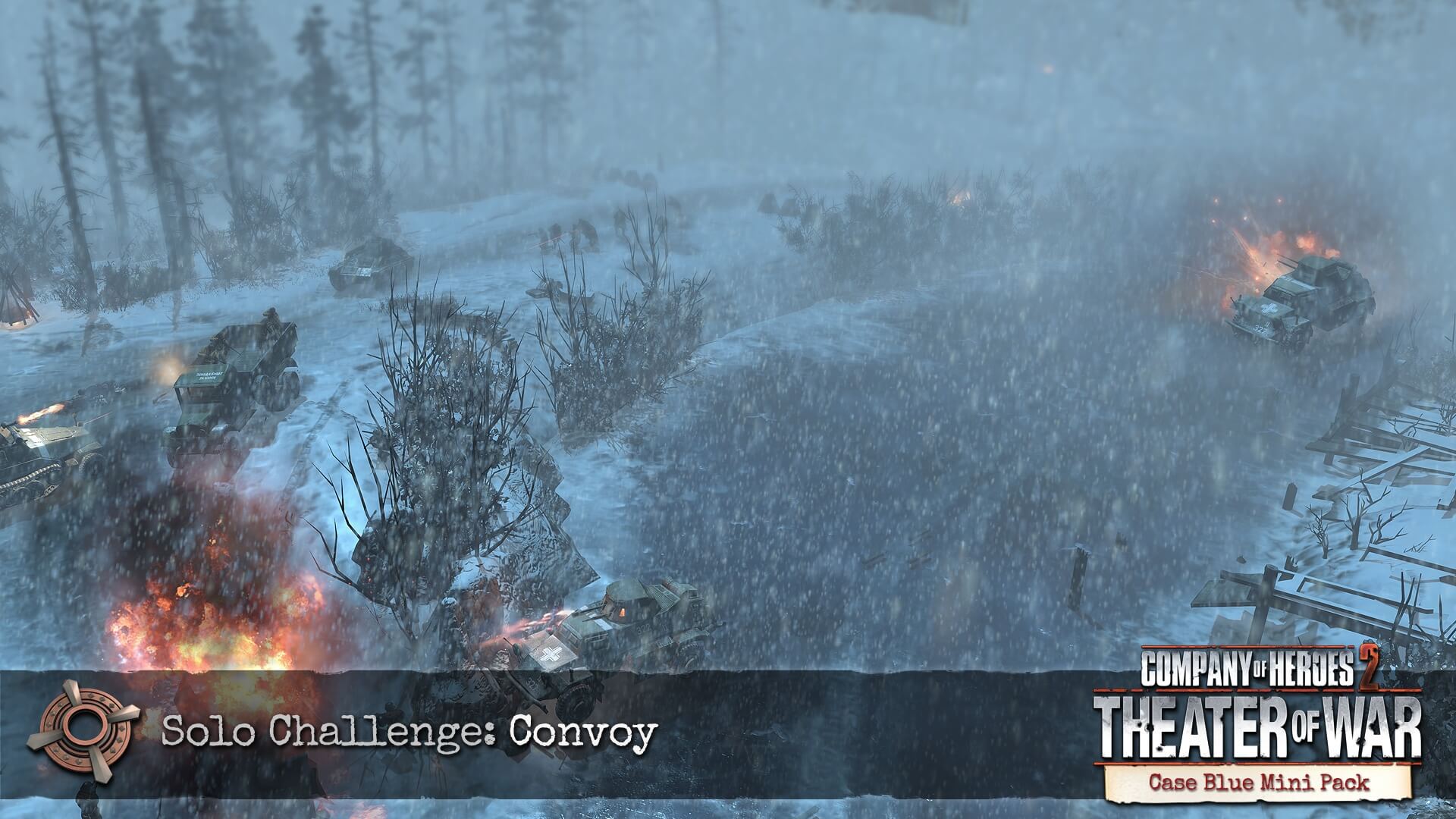 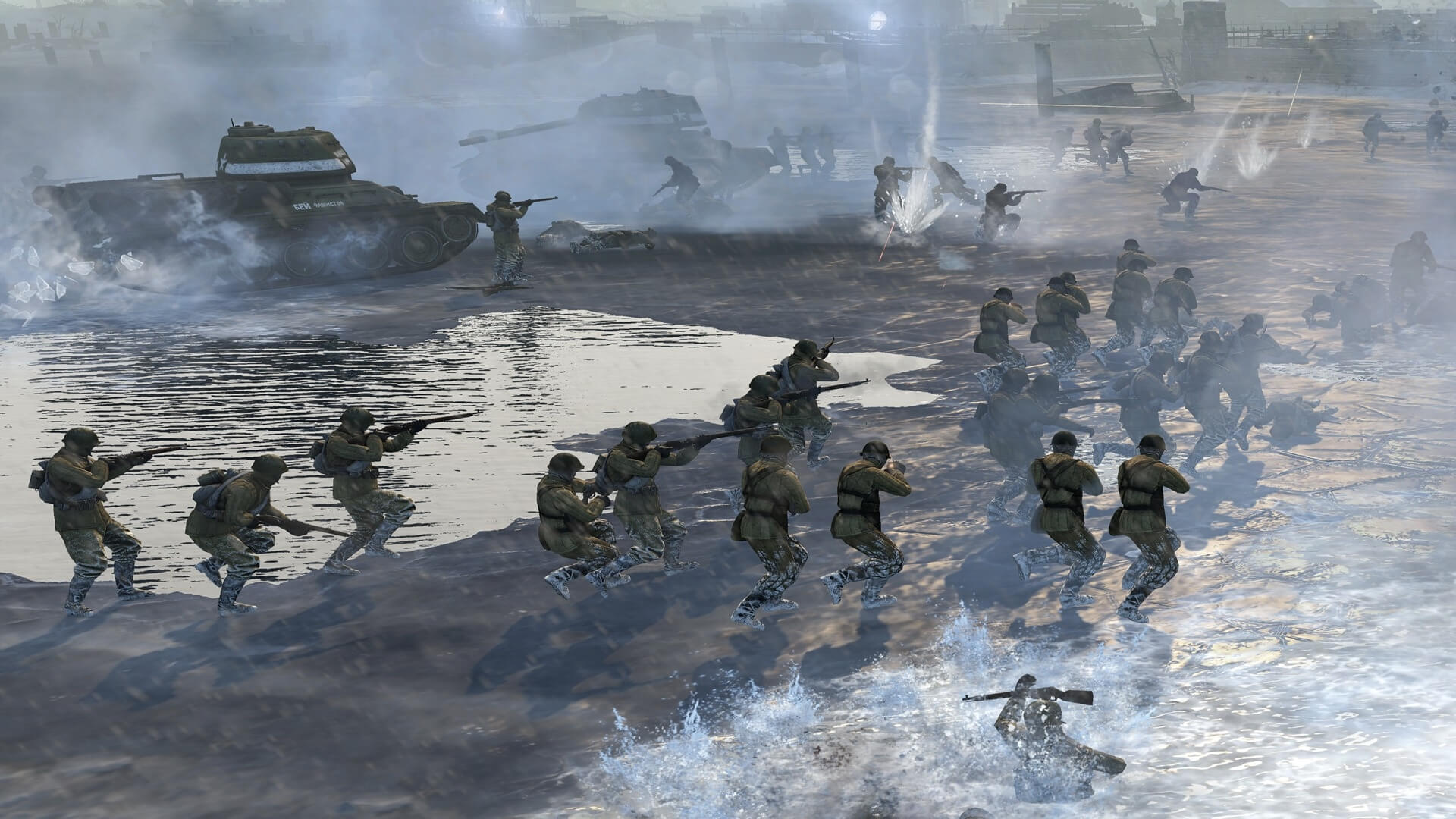 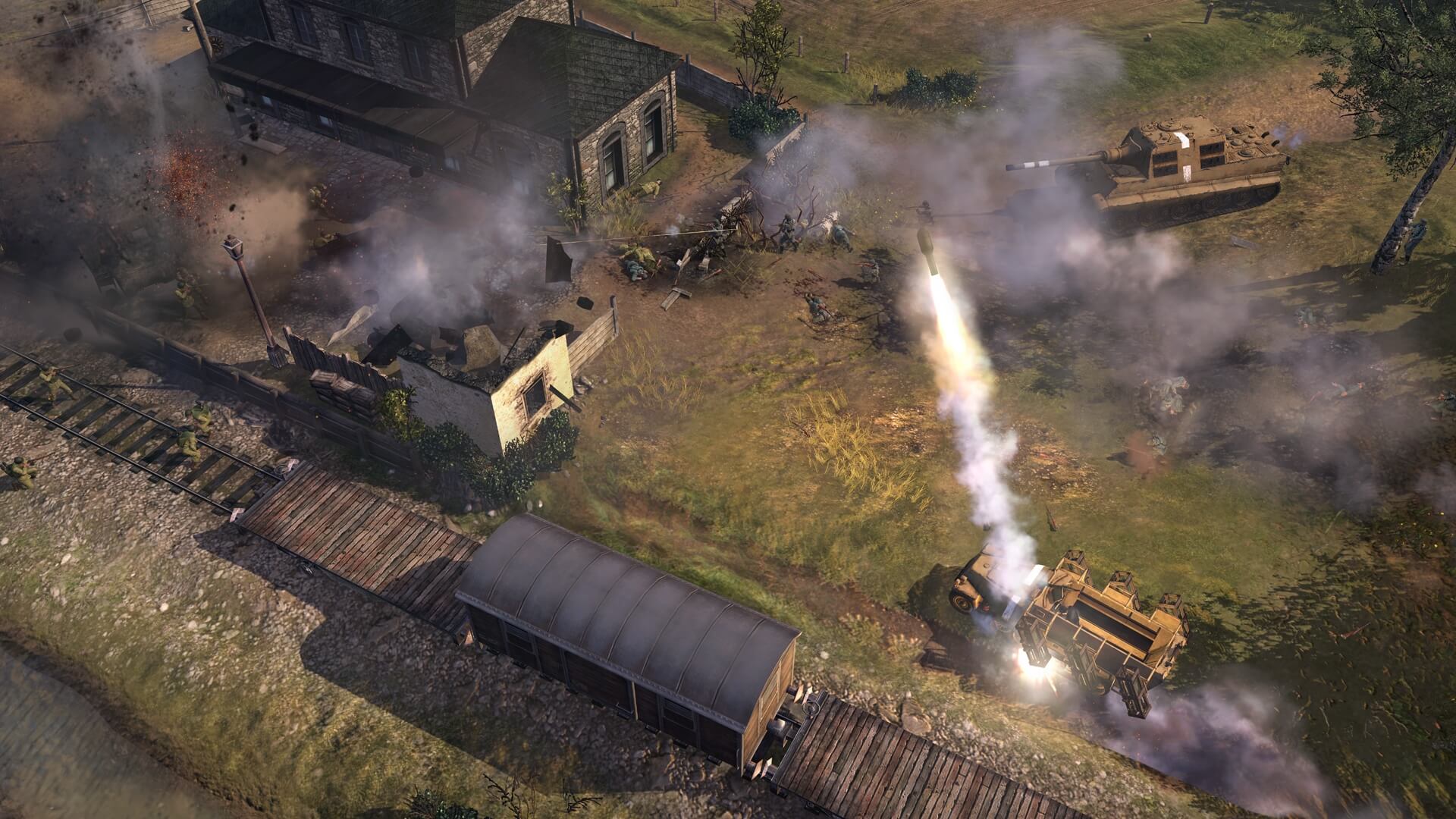 A real-time strategy (RTS) game set in World War II, Company of Heroes brings to life -- in full cinematic detail -- the greatest war mankind has ever known. Gamers will experience the journey of the brave men of Able Company in a deep single-player campaign that begins with the invasion of Normandy through their fight across Europe. Company of Heroes' completely destructible environment means no two battles ever play out in the same way. Advanced squad AI brings soldiers to life as they interact with the environment and execute advanced squad tactics to eliminate the opposition forces.

Company of Heroes follows the travels of Able Company as they go from the horrific landing at Normandy Beach through the push through the French countryside, culminating with the collapse of the German 7th Army. The single-player campaign consists of 15 long and enjoyable missions ranging from capturing the town of Cherbourg to a covert operation to take out a V2 launch site to a truly horrific battle through the hedgerows to capture Hill 192. Each mission is preceded by a well done in-engine cutscene and briefing.

The next chapter in the #1 rated RTS franchise thrusts players into a hellish war torn landscape to command two battle-hardened armies in relentless campaigns for honor and country. Players lead the tenacious British 2nd Army during the heroic World War II liberation of Caen, France, and command the German Panzer Elite as they struggle to repel the largest airborne invasion in history.

Company of Heroes - Tales of Valor

In the world’s darkest hour you are a commander of the Soviet Red Army, entrenched in brutal frontline warfare to free Mother Russia from the Nazi invaders. It is 1941 and the beginning of what will become the bloodiest conflict of World War II resulting in over 14 million military casualties. Witness the struggles of the Red Army from near defeat through their incredible triumph over Germany in the most challenging and costly theatre of the war, the Eastern Front. Your military tactics hold the power to tip the very balance of this conflict. Engage in tactical combat that will define you as a military leader and wield the might of the Soviet Empire as you smash your way to Berlin.

The Oberkommando West , battle hardened and newly equipped, are a resurgent and very dangerous foe.

Despite being challenged by an economy nearly shattered after years of continuous war, the Oberkommando West still manage to field some of the most impressive heavy armor yet seen: the technical prowess of Germany is on full display as devastating armored force equipped with a new generation of super-heavy tanks repeatedly counterattack the US Forces attempting to drive into the heart of Germany.

Seventy ton ‘King Tigers’ are supported by well-trained infantry; assault Sturmpioneers lead the way while capable Volksgrenadiers are a threat to enemy infantry and vehicles alike.

Company of Heroes 2 - The Western Front Armies: US Forces

Under the Command of General Dwight D. Eisenhower, US Forces have driven ashore on the bloody beaches of Normandy and fought their way deep into Europe driving back the German war machine. Now battle fatigued and spread out on enemy soil, an army made of citizen soldiers are pitted against a battle-hardened professional military with over four years’ experience. Facing the best Germany has to offer, the US Forces fight desperately and viciously to expand the frontlines.

An adaptable army that will bend but not break, the US Forces draws on some extremely versatile infantry and vehicles, while the unique base structure of the army captures the temporary nature of the frontlines.

After the long winter of 1941, the German Wehrmacht launched a massive summer offensive in June of 1942 codenamed “Case Blue”. The goal of this operation was to capture the oil-rich lands of the Caucasus region. Case Blue achieved spectacular early gains, but met with strong resistance around Stalingrad.

Take part in a series of scenarios, challenges and battles based upon this operation. Command the mighty German war machine and lead their forces to victory from spring through to the harsh winter of 1942.

During the Spring Rasputitsa in early 1943, the Red Army launched a series of counteroffensives against German lines in the southwest. While initially successful, the Germans regrouped and managed to regain the momentum to recapture Kharkov.

Take command of both factions in a series of challenges and battles that feature new environmental conditions; thick mud that impacts vehicle movement and exposes new vulnerabilities.

In the winter of 1942, the Red Army fought valiantly to hold the capital of Stalingrad against a seemingly unstoppable German advance. At great cost and against all odds, the Soviets managed to stop the fascist advance and began their counter attack with Operations Uranus and Little Saturn. The success of this campaign trapped the Wehrmacht's Sixth Army in Stalingrad and won the Red Army a victory that helped turn the tide of the entire war.

Take command of the Red Army in a series of scenarios, challenges and battles based on this historic victory. Your strategic decisions will lead the Soviets from the jaws of defeat to a crushing victory.