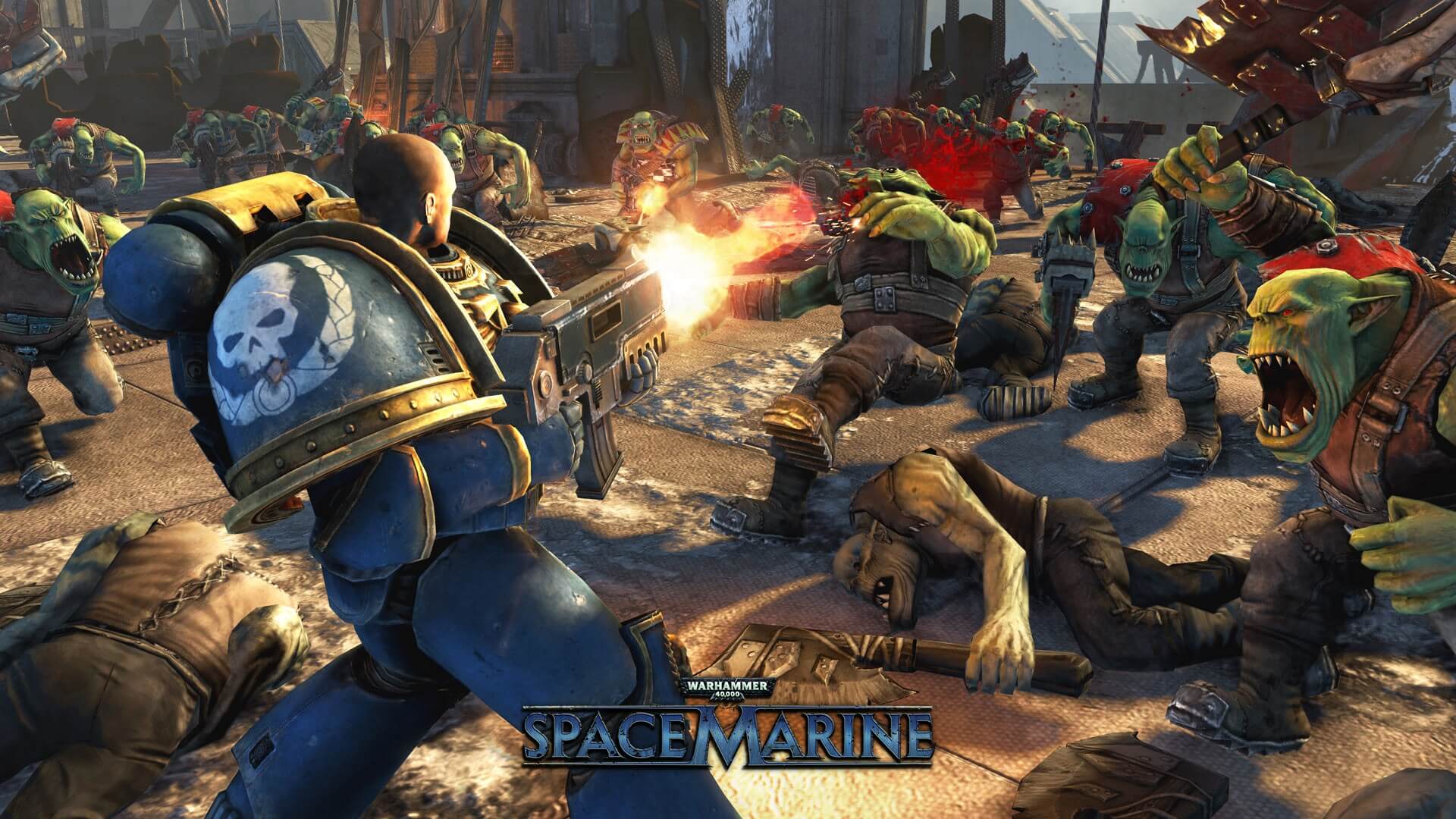 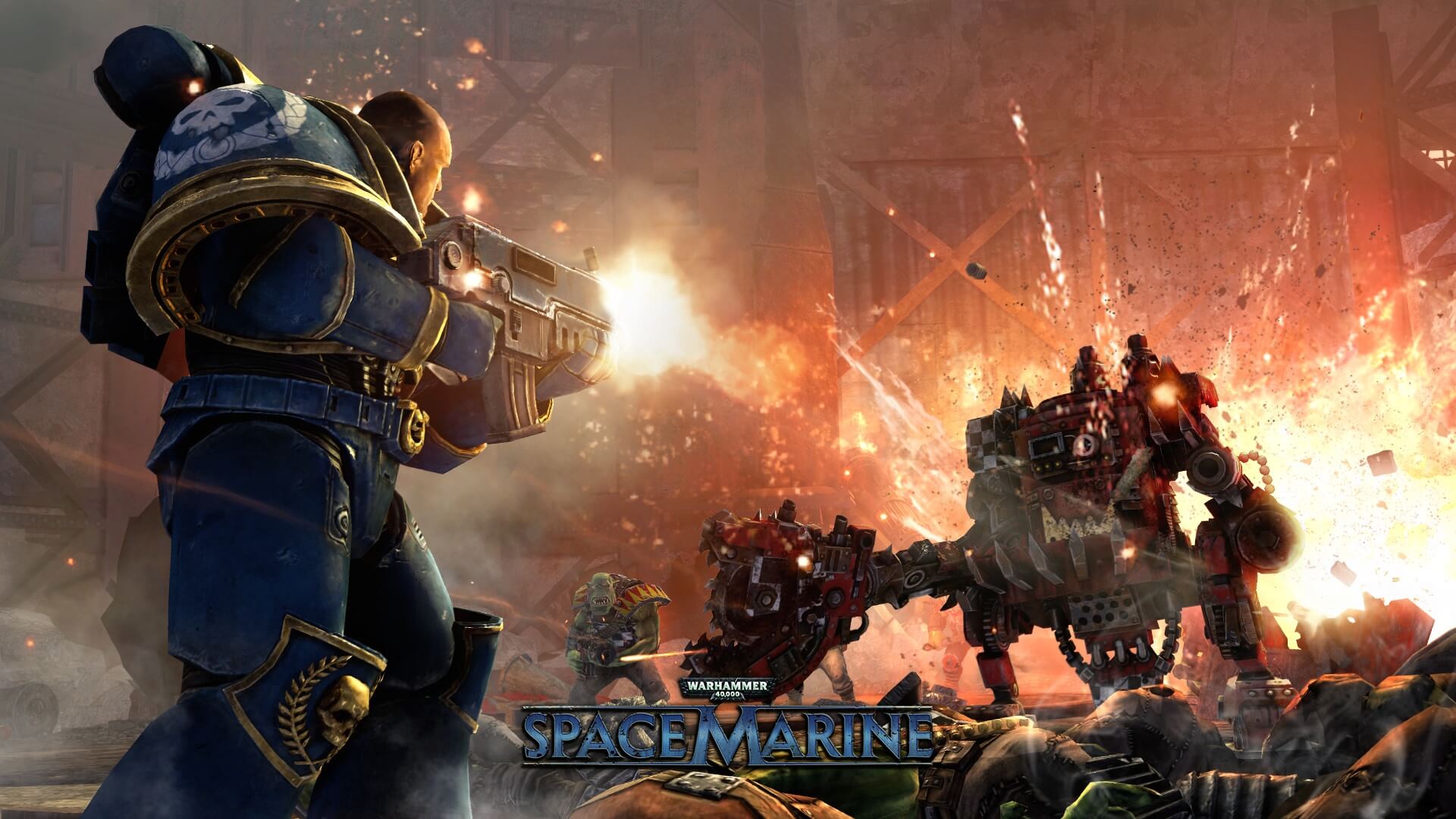 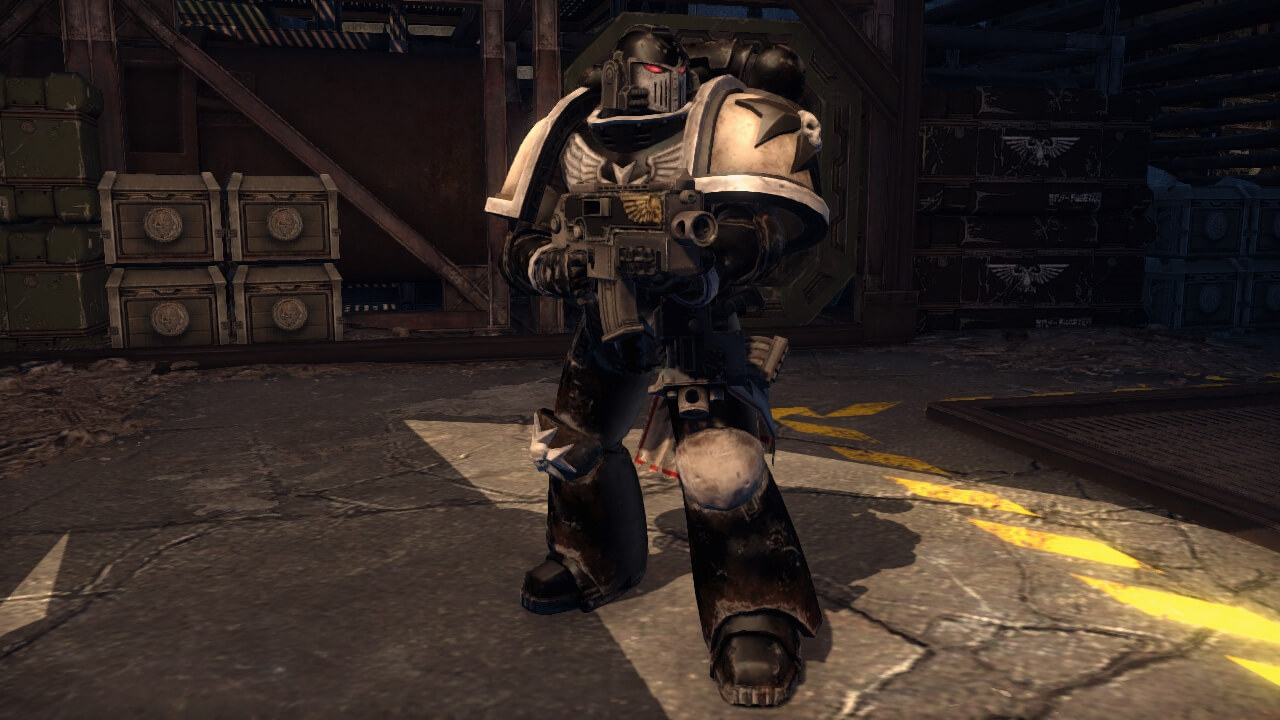 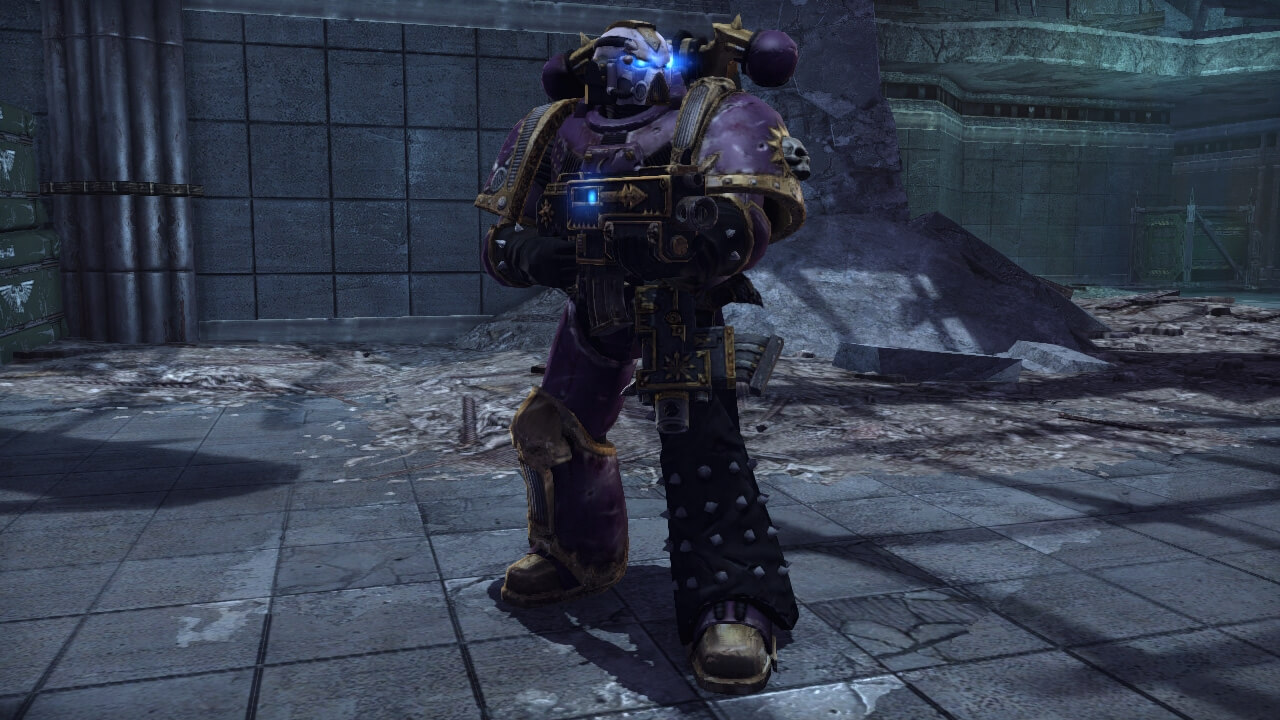 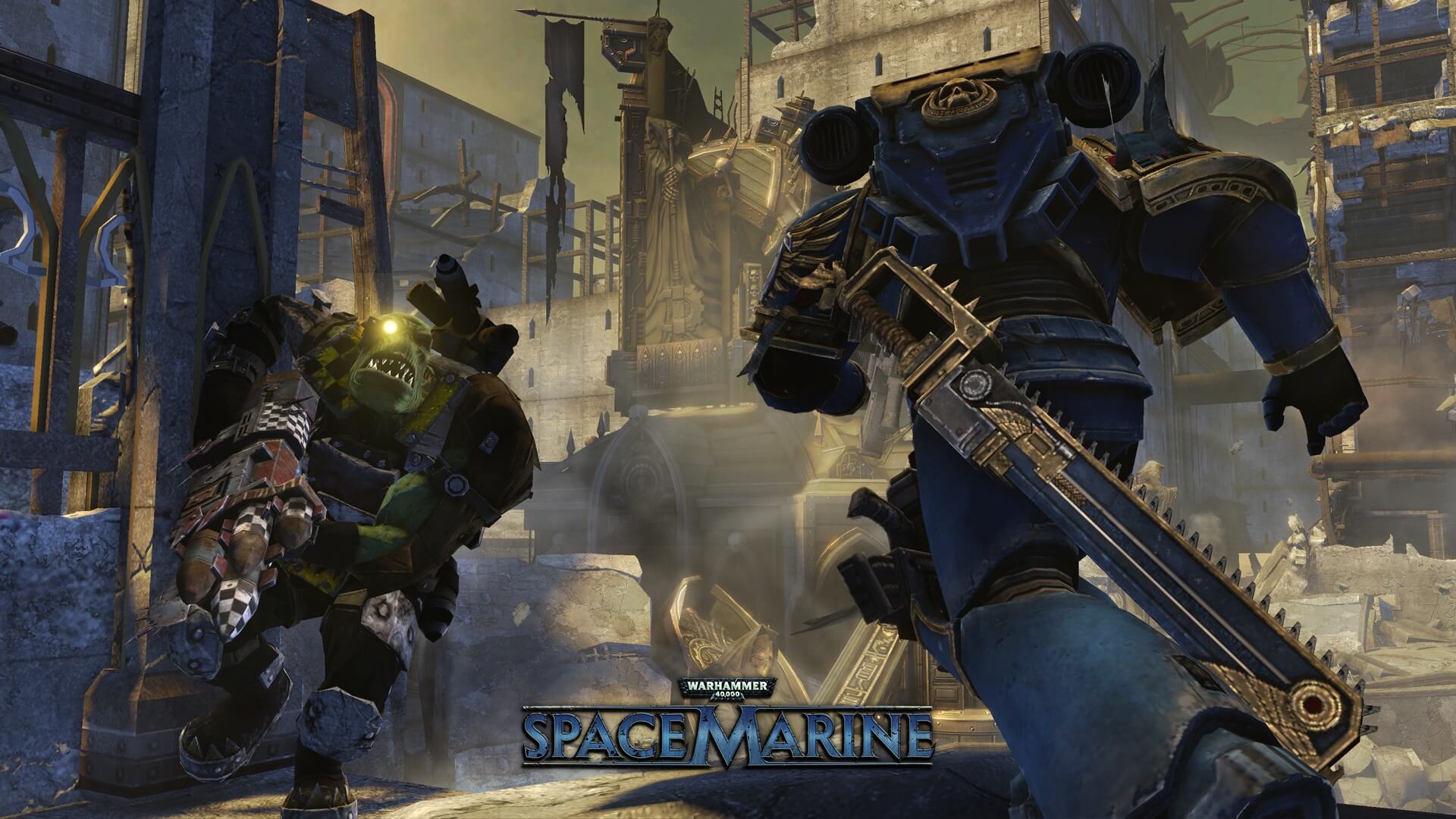 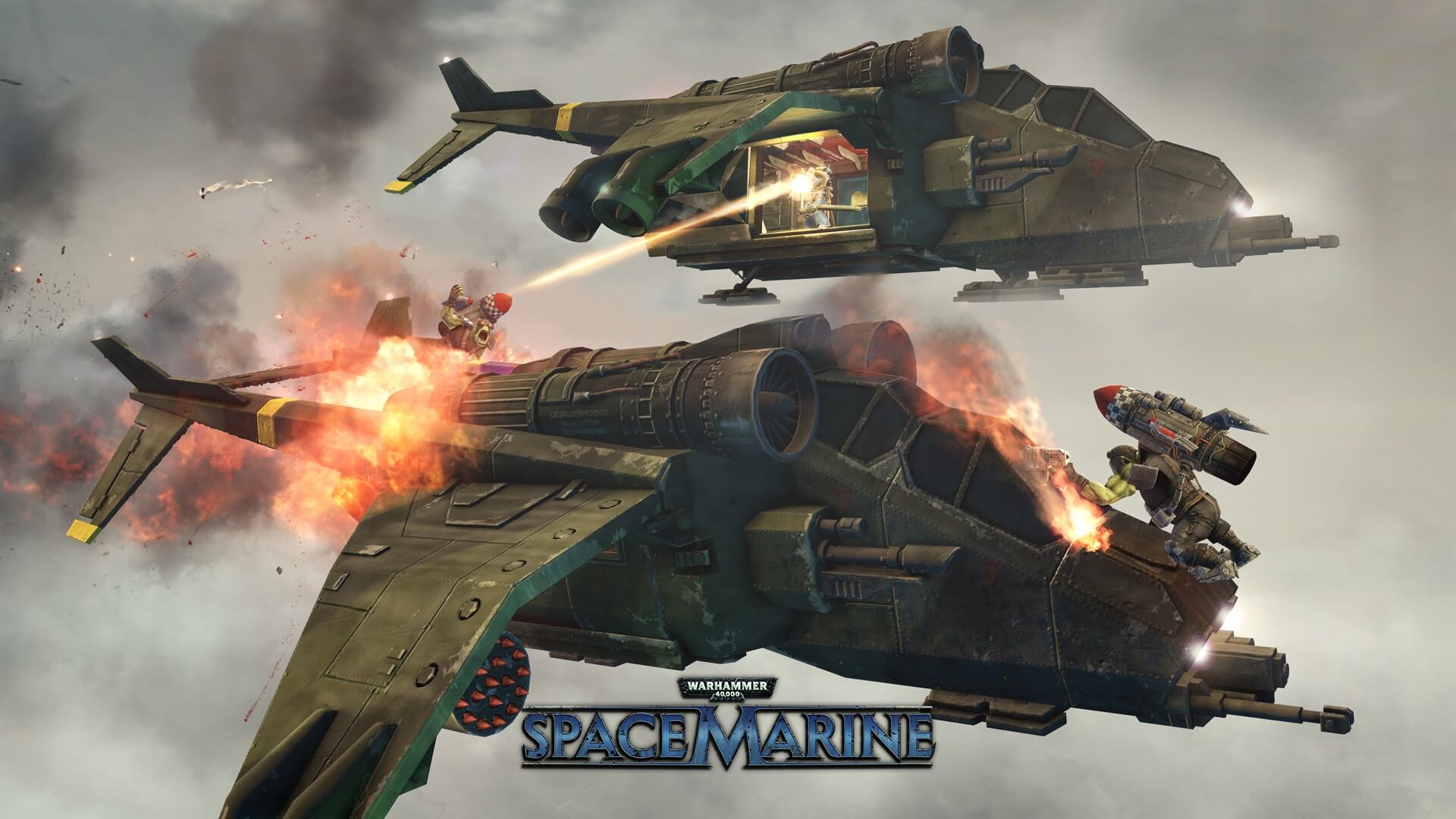 Step into the armor of a relentless Space Marine and use a combination of lethal and deadly weapons to crush overwhelming alien forces. Immerse yourself in an intense and brutally violent world based on the richest science fiction fantasy ever created.

In Warhammer® 40,000® Space Marine® you are Captain Titus, a Space Marine of the Ultramarines chapter and a seasoned veteran of countless battles.

A millions-strong Ork horde has invaded an Imperial Forge World, one of the planet-sized factories where the war machines for humanity’s never ending battle for survival are created. Losing this planet is not an option, but a darker and far more evil threat is lurking large in the shadows of this world.

With an Imperial liberation fleet en-route, the Ultramarines are sent in to hold key locations until reinforcements arrive. Captain Titus and a squad of Ultramarine veterans use bolter and chainsword to take the fight to the enemies of mankind.

RELIC BOLTER: A masterpiece of the Techmarine's craft, this gleaming bolter is among the most prized items in the chapter armory. Firing self propelled explosive tipped rounds, it is said to be the Emperor's will made manifest.

POSSESSED BOLTER: The subject of fearsome rituals, this boltgun contains the bound spirits of ancient daemons of warfare. Each self-propelled explosive round is branded with these daemons' own sigils.

RELIC CHAINSWORD: This gleaming master-crafted chainsword combines terrifying power and great speed. It is traditionally entrusted to champions of the chapter or members of the Chapter Master's own honor guard.

POSSESSED CHAINSWORD: Daemons of bloodshed and terror have been bound into the very heart of this fearsome chainblade. These dark rites have not reduced the weapon's speed or precision on the battlefield.

Unlock the deadly Power Sword weapon in multiplayer. Sheathed in a power field, it cuts through armor and flesh alike and features unique animations, combos and damage output.

Only the greatest Space Marines and vilest Chaos Space Marines are given the chance to become the heavily armored 20 foot tall Dreadnought. Fight to control the ancient machinery necessary in multiplayer to encase one member of your team inside the walking destructive force that is the Dreadnought. Strike down the Imperium or defend the Emperor on three new multiplayer maps.

Driven by their hatred of weakness in all forms including their own genetically enhanced flesh, the Iron Hands are known for the extensive cybernetic and mechanical augmentations that they undergo. Veteran battle brothers of the Iron Hands are almost entirely mechanical with the majority of their flesh replaced.

Corrupted and swollen by the pestilences and plagues that afflict them Death Guard Champions prefer short ranged combat where they can spread the diseases that the Chaos God Nurgle has blessed them with. Immune to pain or damage they grimly advance forward laughing off attacks and leaving a trail of pestilence and disease behind them.

Strike down the supporters of the false emperor with new downloadable content that lets you play as Chaos Space Marines in the 4 player Co-op mode against Imperial Guard and Space Marines. Strike down the forces of the Imperium or defend the Emperor with three new multiplayer maps and unlock new achievements.

One of the noblest and most heroic of the Space marine Chapters, the Blood Angels have fought the enemies of humanity for ten millennia. Cursed by a dark flaw, they are driven into battle with unmatched ferocity and when they descend into battle, no foe can stand against their wrath.

Experts at close ranged combat, the Salamanders favor weapons like the melta gun and make heavy use of flame ornamentation on their weapons.

Experts at infiltration the Alpha Legion roam the galaxy spreading heretical Chaos Cults using subterfuge and misdirection to further their intricate plots. Like they multi-headed Hyrda that they use as their symbol the Alpha Legion will attack from multiple areas.

Silent Warriors whose black armour is adorned with chilling images of bone and fire the Legion of Damned appear only in times of greatest need and with chill precion, turn disaster into victory. Considered by some to be an extension of the Emperor's superhuman will, an eery glow surrounds their armour and their weapons discharge flaming projectiles that can pierce the strongest armour.

Renowned crusaders against the enemies of humanity, the BLACK TEMPLARS eschew the idea of a home world. Instead, they have taken to the stars in mighty crusade fleets, actively seeking out the enemy throughout the Galaxy. -- The SPACE WOLVES are the most savage and barbaric of all the Space Marine Chapters, whose red-hot battle-lust is channeled through boltgun and frost axe. They are warriors of myth, whose noble deeds give rise to legends.

The EMPEROR'S CHILDREN Legion betrayed their figurative father -- the Emperor of Man -- some ten thousand years ago, during the Horus Heresy. The Legion fell to the perverse temptations of the Chaos God Slaanesh, becoming addicted to the sensations of battle and conquest. They have served the Prince of Excess ever since. -- Once the Imperium's finest tacticians and siege-masters, the IRON WARRIORS sided with Chaos in the ancient Horus Heresy and turned their skills against Humanity. The Legion's warsmiths now blend ancient technologies with daemonic gifts, creating terrible war machines and fearsome weapons.