Secret Government is a game in the genre of turn-based strategy for PC and mobile platforms, simulator of development of the society. The player has to actively intervene in the events of history from the XVII century to the present day. 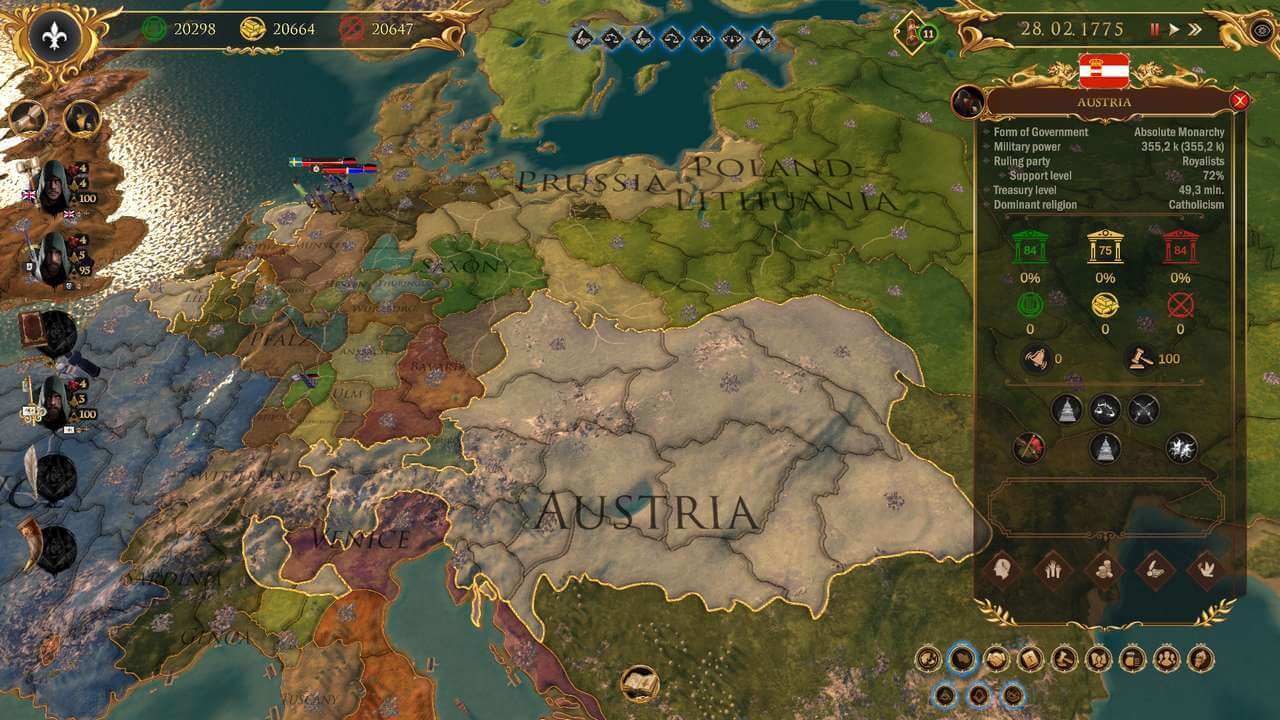 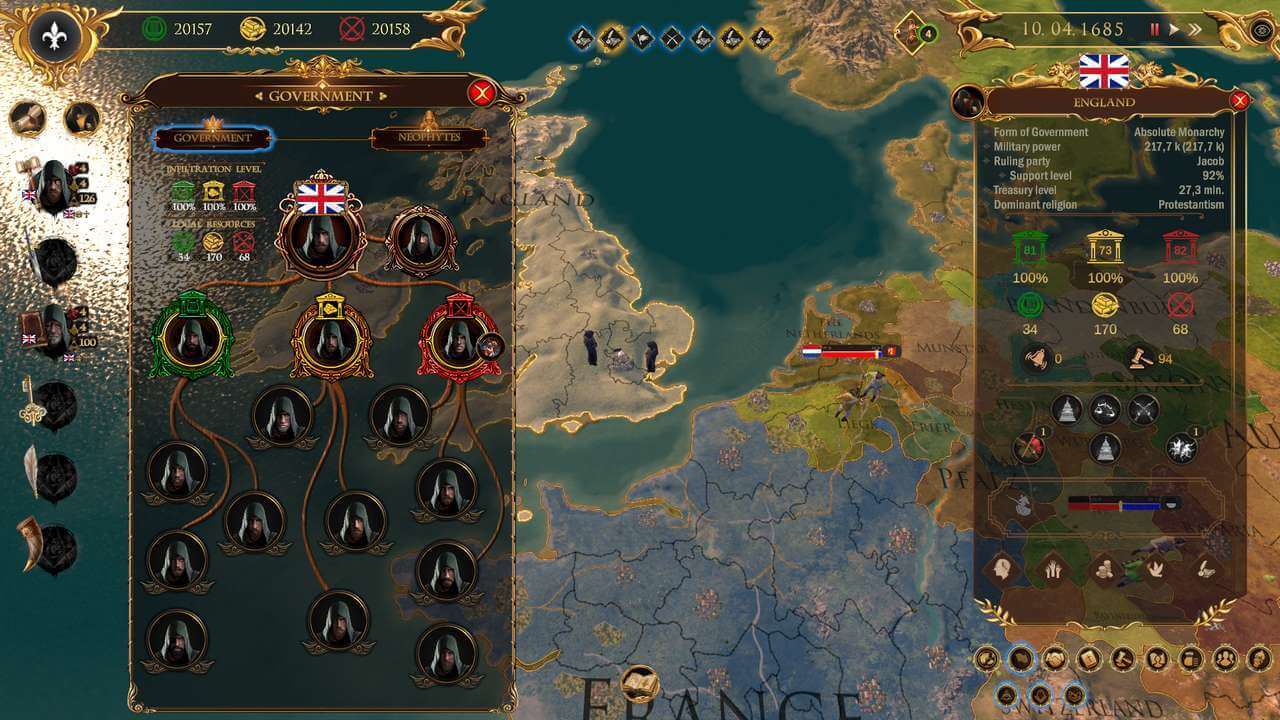 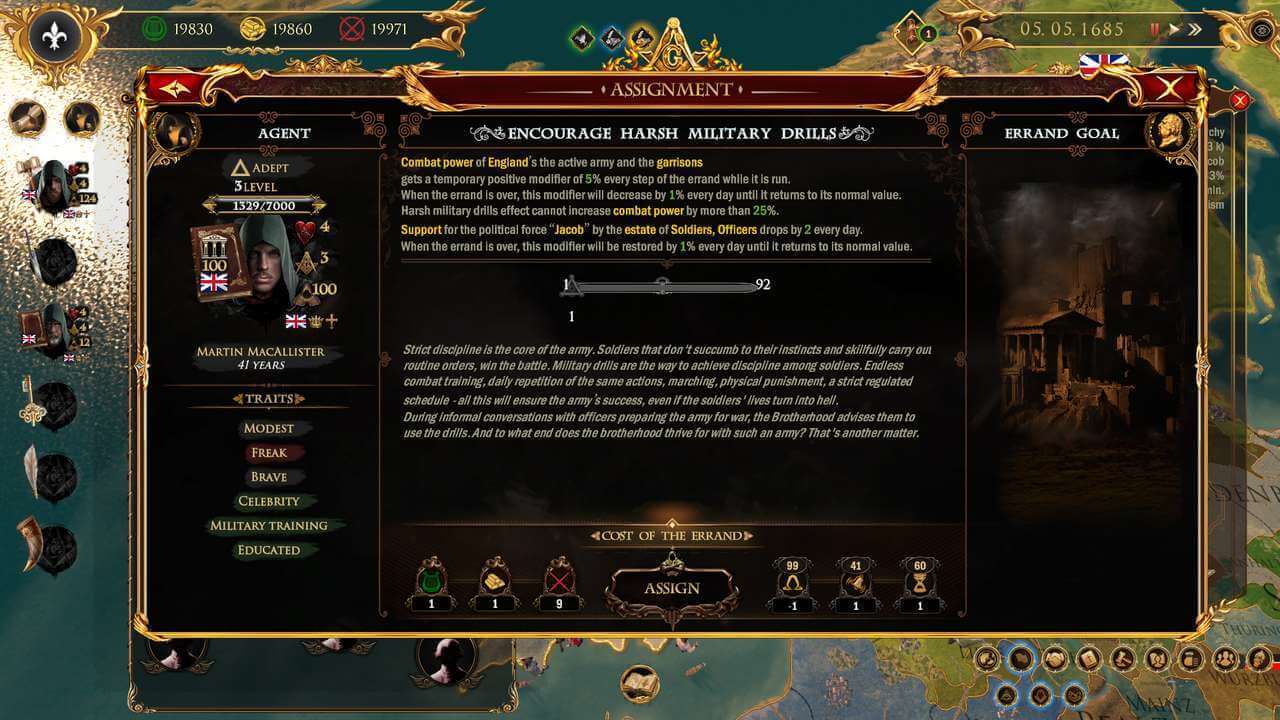 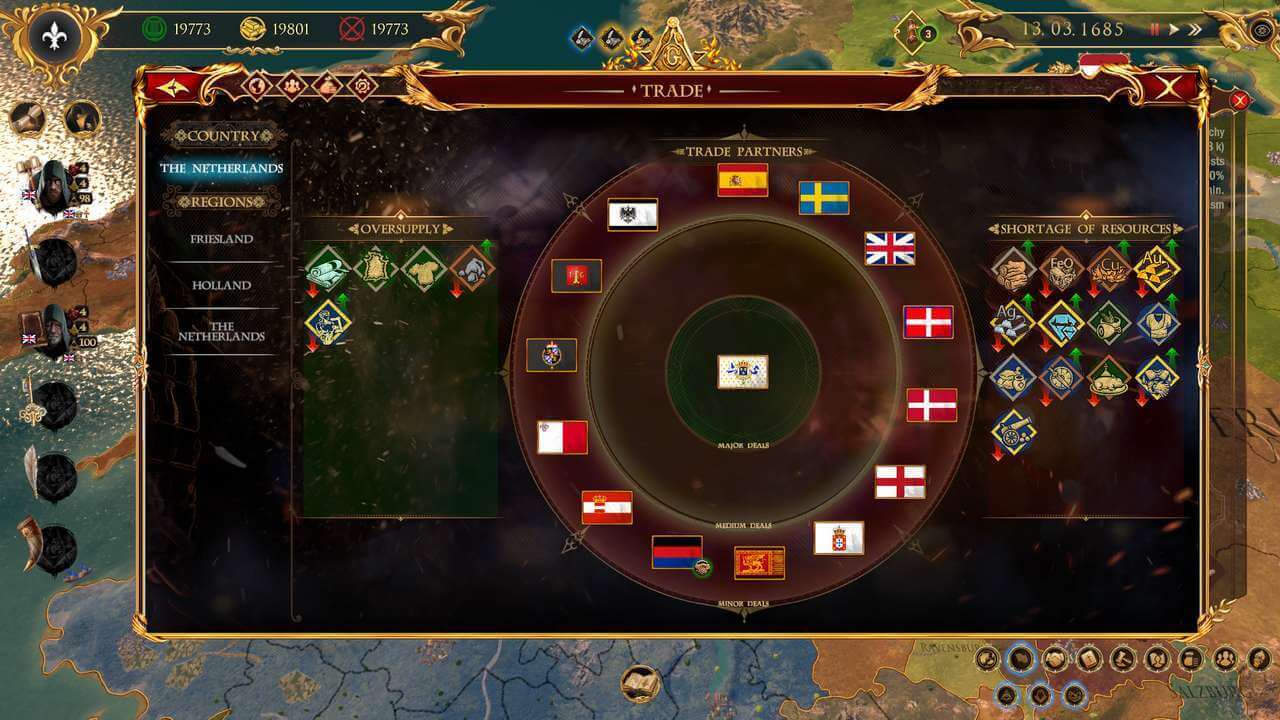 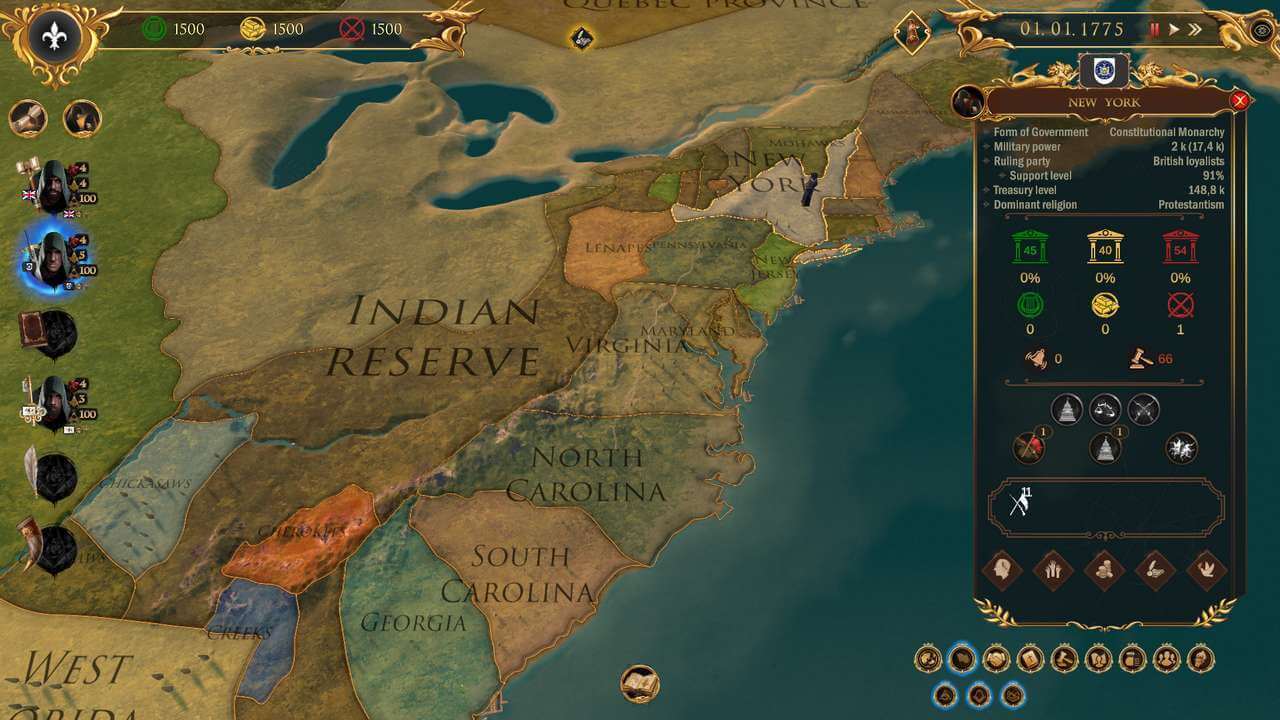 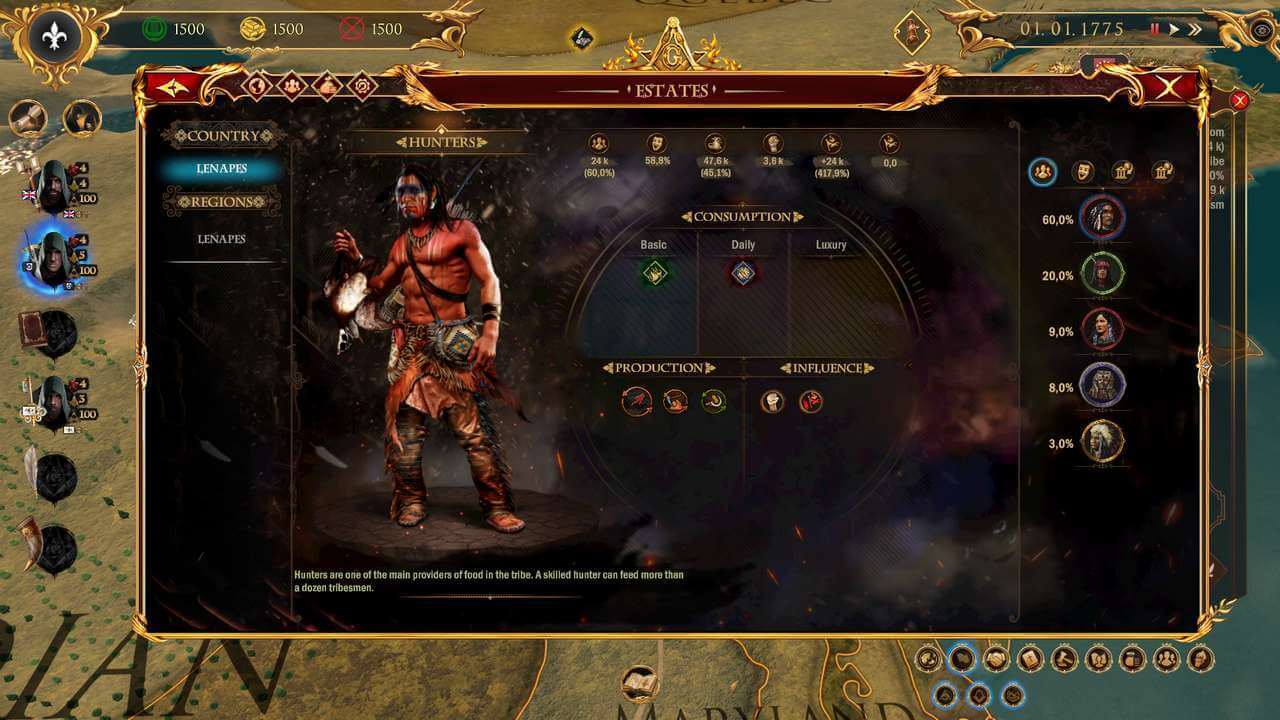 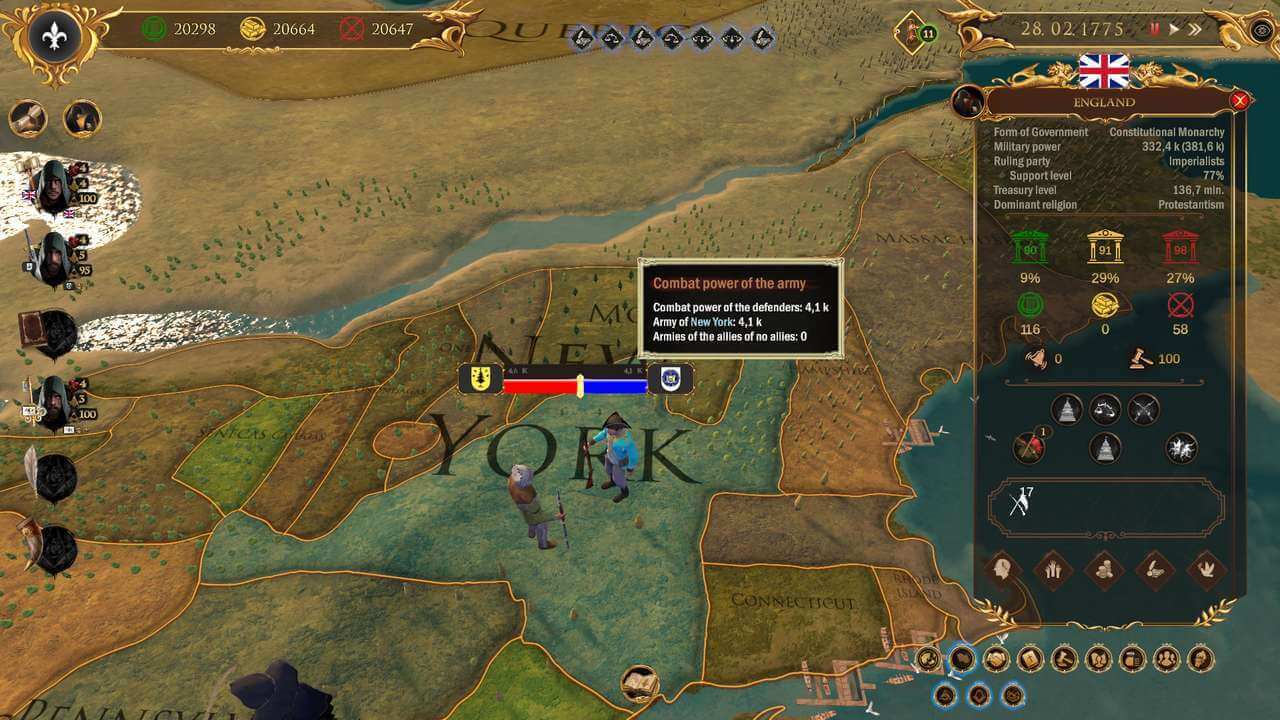 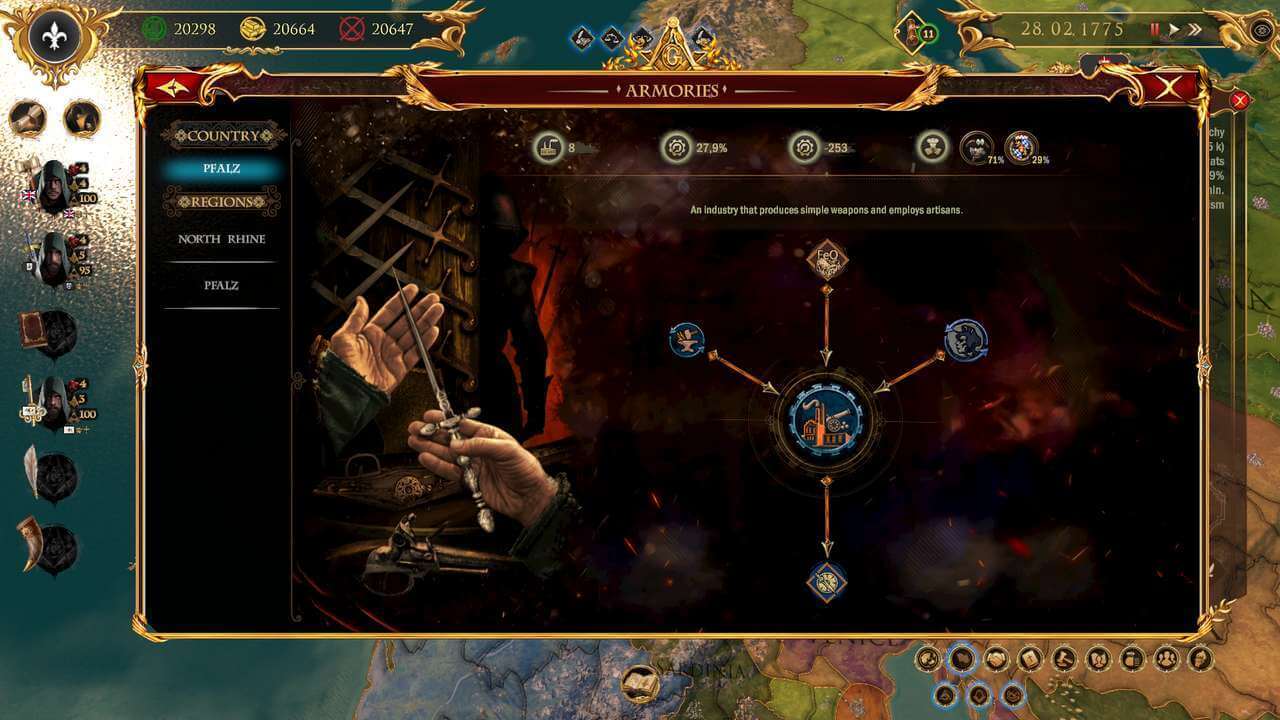 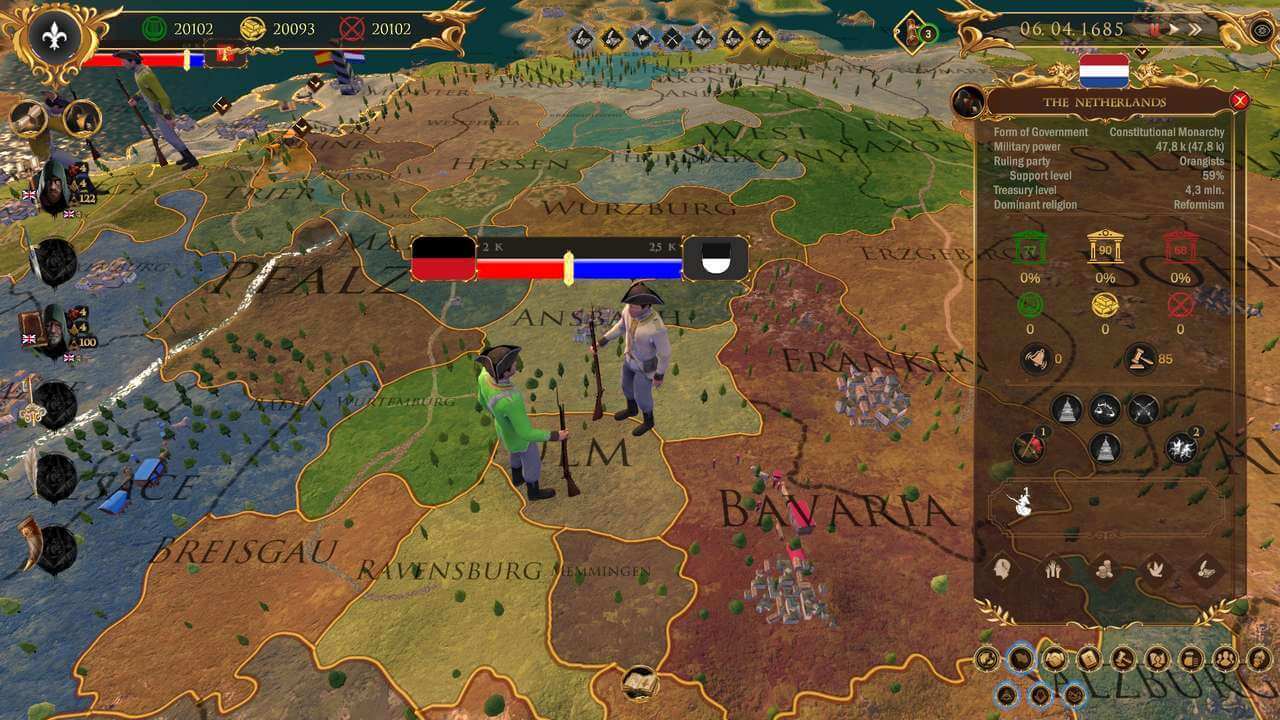 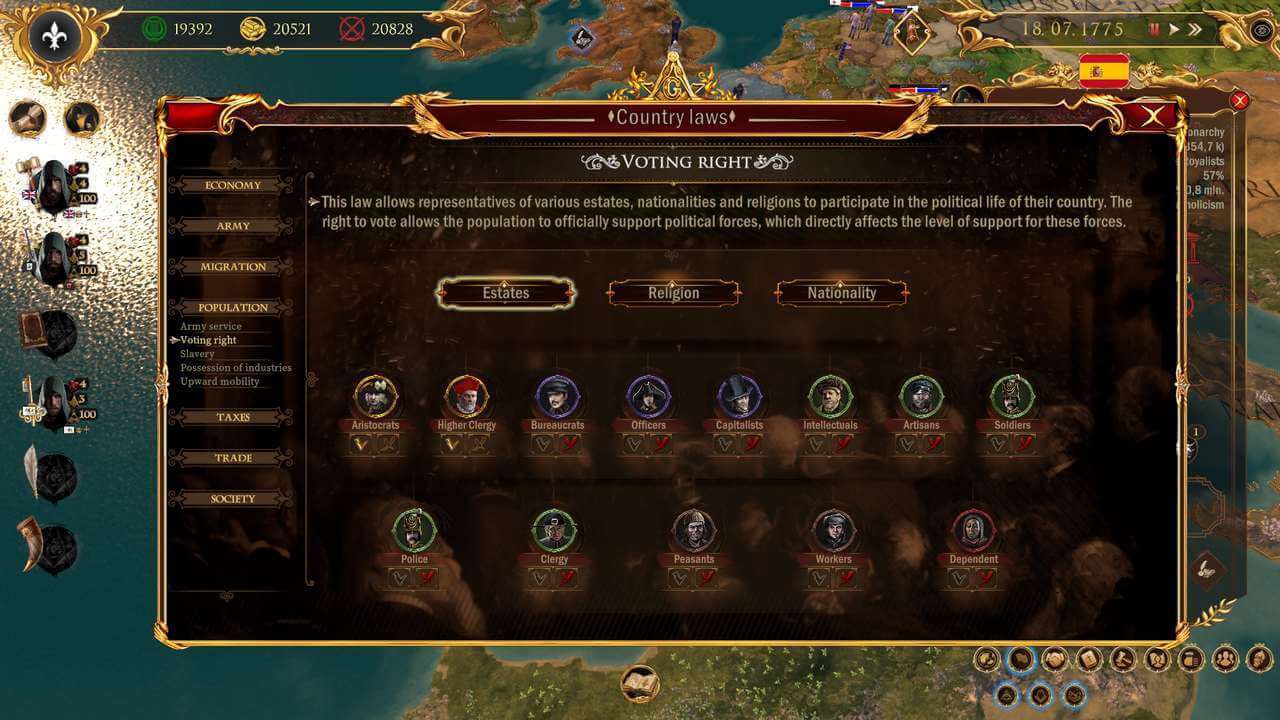 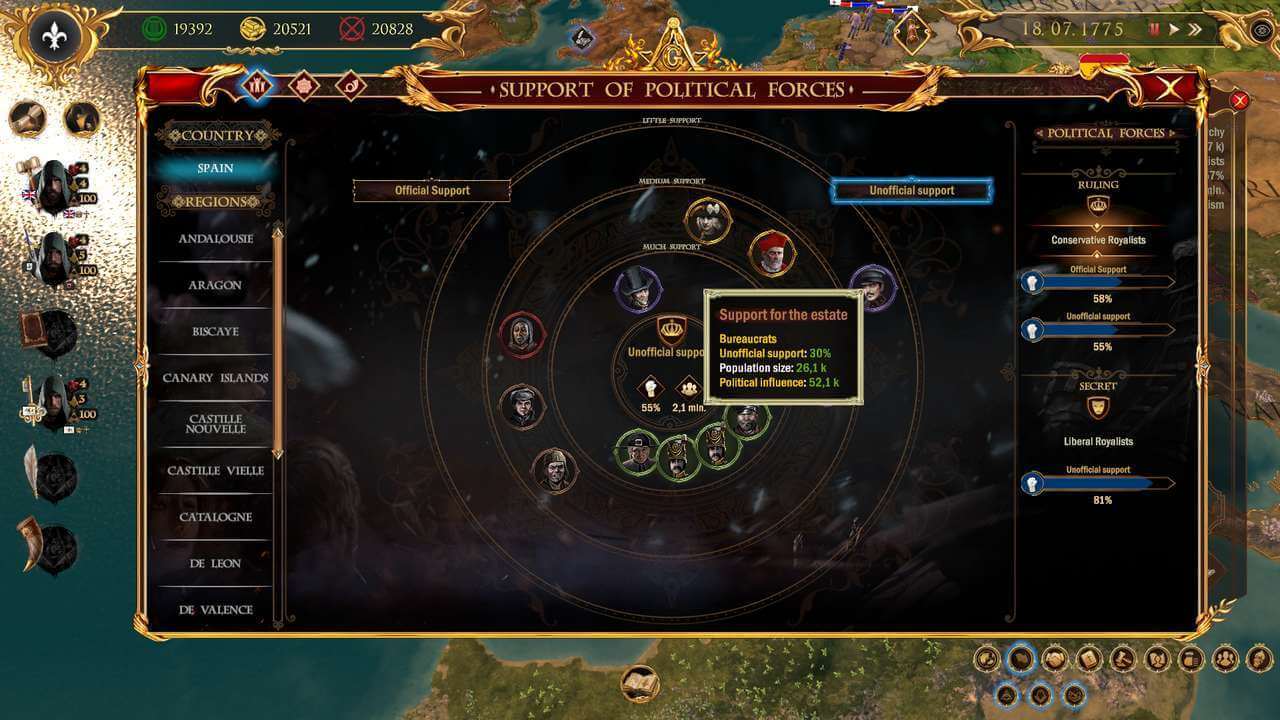 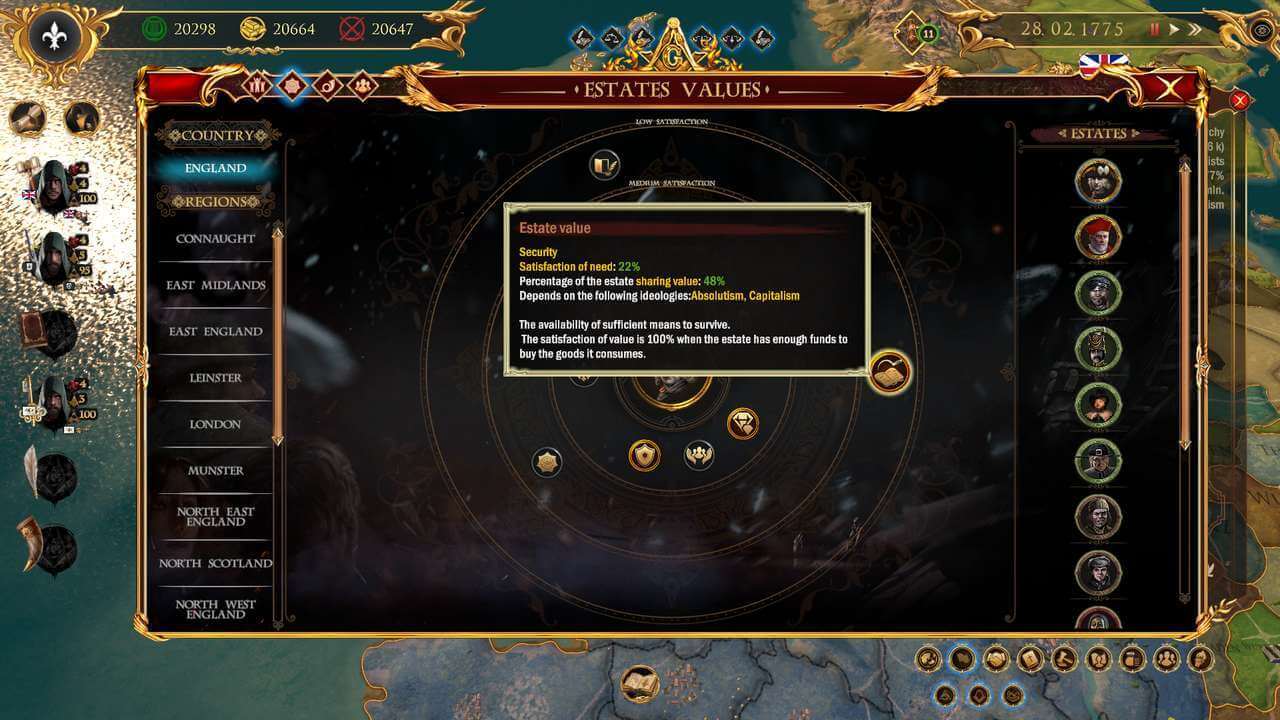 Secret Government is a game in the genre of turn-based strategy for PC and mobile platforms, simulator of development of the society. The player has to actively intervene in the events of history from the XVII century to the present day.

In this case, the player is not a separate state. He runs a secret international organization that can influence what is happening in any country.

Key events are displayed on an interactive political map. The goal of each game mission is to change a certain situation in a certain way, on which the future of the whole world depends. For example, to shake the foundations of the monarchy or create communism.

In the role of the ruler of each of the countries is artificial intelligence. He is guided by a complex system of checks and balances, is able to assess the risks and benefits of raising taxes, starting new wars, threatening revolutions, and so on.

The game process assumes that rulers seek to maintain the status quo and follow the rules of their era. They care only about the reliability of power, prosperity of possessions and the ability to multiply both. The player will have to find a way to get the system out of balance and provoke a crisis that will ensure the necessary changes.

Followers of the Brotherhood will be introduced to the government, replenish their treasury at their expense, conduct useful laws, direct historical events in a certain direction. The most important thing is to keep your actions secret from the townsfolk and influential enemies.

Conspiracy
Have you ever thought about the fact that our civilization has been existing not that long, and all the rules and values that we take for granted, are just a part of the social contract which has formed only a couple of centuries ago? How did it happen?

Trying to explain the progress and development of the society, scholars have written thousands of books. They have gathered hundreds of coincidences and patterns, connections in which are so messy that it seems almost improbable.

What if everything is actually much easier? What if the world is ruled not by chaos, but by order? Behind what’s happening there is a distinct, inflexible and indomitable will. Someone wise and cruel, if necessary, who can plan ahead and pass his plan to followers of future generations.

Secret Government is a game based on the theory of a great conspiracy, historical research and myths, rumored to be associated with real existing clandestine organizations.
Storytelling
Gameplay consists of several missions relating to the overall storyline. Each mission is based on a landmark event in the history and significant change in the life of mankind, that you will have to push to a certain choice.

Your goal is to get the events unfold according to the Grand Plan.

At the same time, you will learn about the past of the brotherhood, follow its ups and downs.

On the way the plan will face a hostile society, but the main obstacle is the need to remain in the shadows and not to attract the attention of the rulers and the common people.

Step by step you will implement the plan, gradually discovering what it actually holds. Finally, you will be the one to determine the fate of the Brotherhood and the whole humanity.
Atmosphere
Admire the candle flames gently fluttering on the world map. These are brothers watching you with bated breath. Will this twinkle quake when you make a wrong move?

Ruminate the city over which the old man, mature man and young man are bowed. How many world capitals do you recognize?

If you think you have stumbled upon some hint or symbol, it is likely there for a reason. Look for the signs, and perhaps you will discover the truth.
Authentic world
We have represented the world and its processes so that they looked convincing. We have created a realistic model, whereby States live and interact.

Countries have different forms of Government, the dominant religion and nationality, which could, for example, cause controversy with religious and national minorities inside the country and even lead to separatism of individual regions. The countries also often interfere in external conflicts involving co-religionists and representatives of the same nation.

Brotherhood disposes of three resources: influence, wealth and power, corresponding to the three institutions of the State: authorities, economy and military power.

Using these resources, the brotherhood may have an impact on three major aspects of each country: the economy, diplomacy and society. While the player’s impact is not direct, but subsidiary. For example, you cannot demand the State’s Governor start a war with the neighbor, but you can gradually worsen relations between the two countries, strengthen the army and military settings.
Economy
First thing the rulers monitor is Economics: they raise and lower taxes for one or another population group, somewhere between anger and demand for money. On the development of the regions, the army and the police are always in need of funds. But it is not easy to avoid financial collapse and at the same time the riots caused by, for example, fatigue of war multiplied by the outflow of the estates to the front. Depending on the time and the region economic and forceful influence is in different States. Depends on the wealth of the country and how effective can support bar politicians, at whose side supports. The effect can be enhanced or weaken, interfering in the economy and improving the well-being of the population, in which interest fraternity.
Diplomacy
Rulers monitor the external threat, seek military allies and weaker neighbors to take away the part of the land or just strengthen the prestige by a "small victorious war".

Diplomacy system assumes that attack on another country requires long and steadily worsening relations with it. Therefore, a new war will not come as a surprise to the head of the fraternity. Your secret society is unable to directly manage the movements of armies and specify for the rulers, which regions to capture, but it is able to carry out the laws, strengthen the army of a country or, on the contrary, organize sabotage, weakening the forces.

Any war ends in negotiations, during which the countries determine the peace terms. The brotherhood does not set the conditions, but can directly affect, for example, exactly what territory goes to the winner and how much the indemnity will be.
Society
In the structure and trends of the society development lies the main potential of human changes. Actually this is what the game is focusing on. After all, the world is just what people think of it, is it not?

Certain changes in the moods of citizens of the leading countries of the world will most often serve as the goal of the Brotherhood missions.

Rulers are compelled to watch public order and moods among the people closely. Society is developing. In addition to simple reasons for tumbling public order and starting a revolt, such as excessive taxes or protracted futile wars, there are more complex ones, for example, differences in ideology between different parts of the society and the government. What was recently considered to be normal, becomes unacceptable in due course. The Brotherhood will often strive to influence precisely the minds of the citizens.

The society consists of estates with their own opinions on key issues, including human rights, the church and religion, the need to conduct wars of conquest, and so on. And these opinions seldom coincide, for example, capitalists crave radical economic reforms, and aristocrats and peasants would prefer stability and preservation of the foundations.

Based on convictions, people support certain political associations, which we conditionally call parties. The population is on the side of those who preach similar ideals or offer an unexpected but reliable way out of a difficult situation. For the Brotherhood it is a powerful tool. If the political influence of the opposition exceeds the influence of the ruling party, then the revolution is not far off, which can change the government and the state system. And with them the actions available to the Brotherhood in this country.
Events
The game's plot is based on significant events in the history of different countries. Some events occur as a result of the efforts of the fraternity, some are easy to predict because they are caused by immutable social processes, finally, some are completely random. Of course, don't forget about the consequences of the actions of rulers and members of the hostile secret society.

Events require the player's reaction and usually offer several possible options for resolution with the appropriate resource expenses by the Brotherhood.

It is quite simple to assume what each choice will turn out to be, but predicting the outcome of a chain of interrelated events is much harder.

We are not changing the historical truth: in the end, the world is as we know it. Another thing is the methods required for this world to be created.
Actions
Another important element of the gameplay is the actions of the Brotherhood. Brothers can intrude on the government, recharge Brotherhood Treasury at the expense of any state or start a lodge. The lodge is the local representative of the Brotherhood. After the foundation of the lodge actions, allowing more fundamental laws and changes in the country, become available. Spending time and resources, we can achieve almost anything.

The country's rulers also commit actions that strengthen their power and prestige, and help maintain the existing order.

Most of the actions are available both for the rulers, and the Brotherhood, for example, the law on strengthening the army discipline. However, there are steps that are unique for each of the parties.
Enemies and obstacles
The main obstacles the Brotherhood is to face on the way to the great goal are the machinations of enemies and unwanted public attention. The Brotherhood should operate covertly. The success in keeping the level of secrecy in the country, is shown by the level of awareness. The higher the level, the more suspicious local government is about the existence and activities of the fraternity. It threatens exposure of the agents and the loss of presence in the country. For the suspicion to disappear, some time to hide and not taking action is required. Or you can hide traces spending hefty funds from the treasury of the Brotherhood. The mechanism of awareness provokes a player not to get hung up on one country and act in several regions.

In addition to complicating circumstances there are real enemies. The Dark Brotherhood. This secret society whose purpose is unknown. Their agents frequently stand in your way, and their impact on countries displaces yours.

If the Dark Brotherhood rises steeply, the Grand Plan is not about to come true.