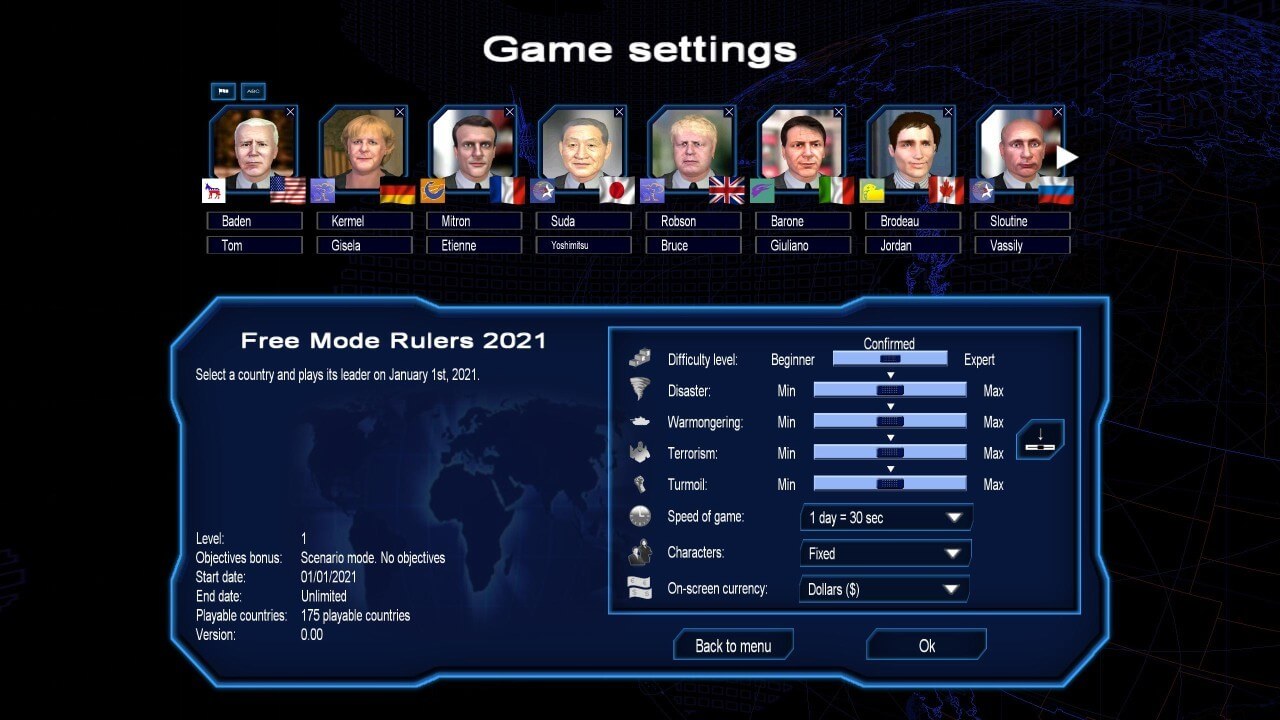 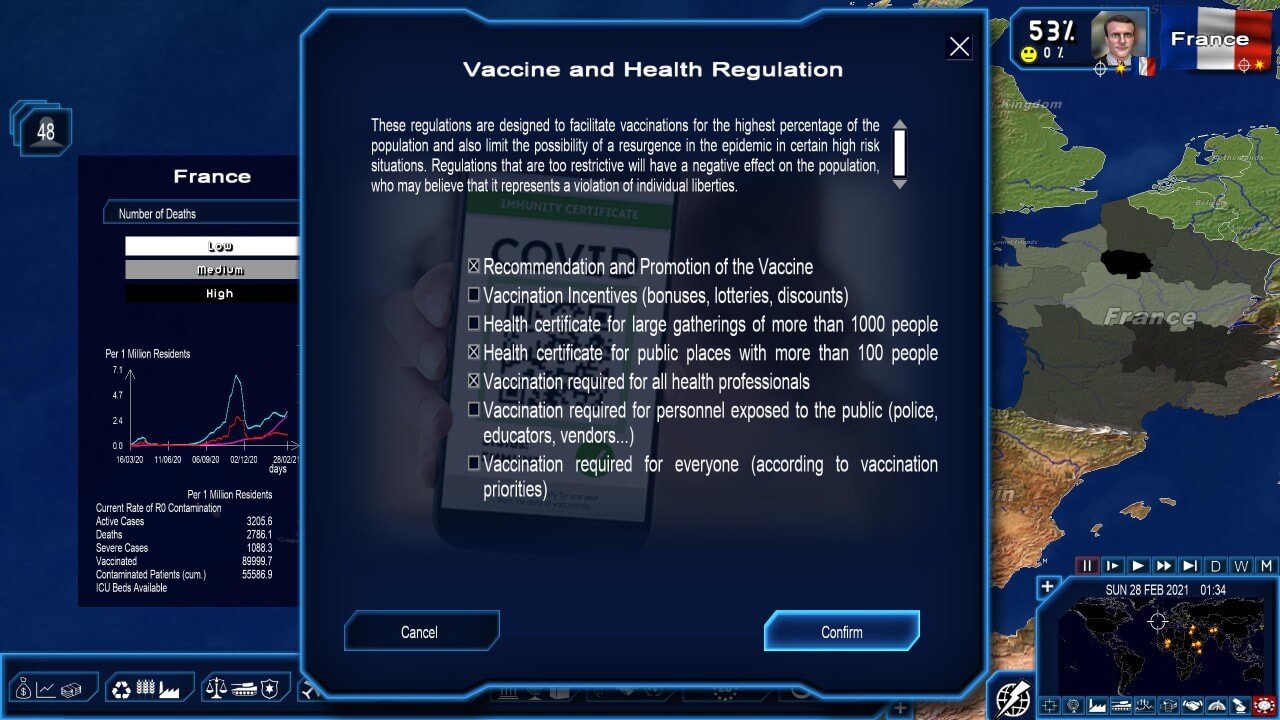 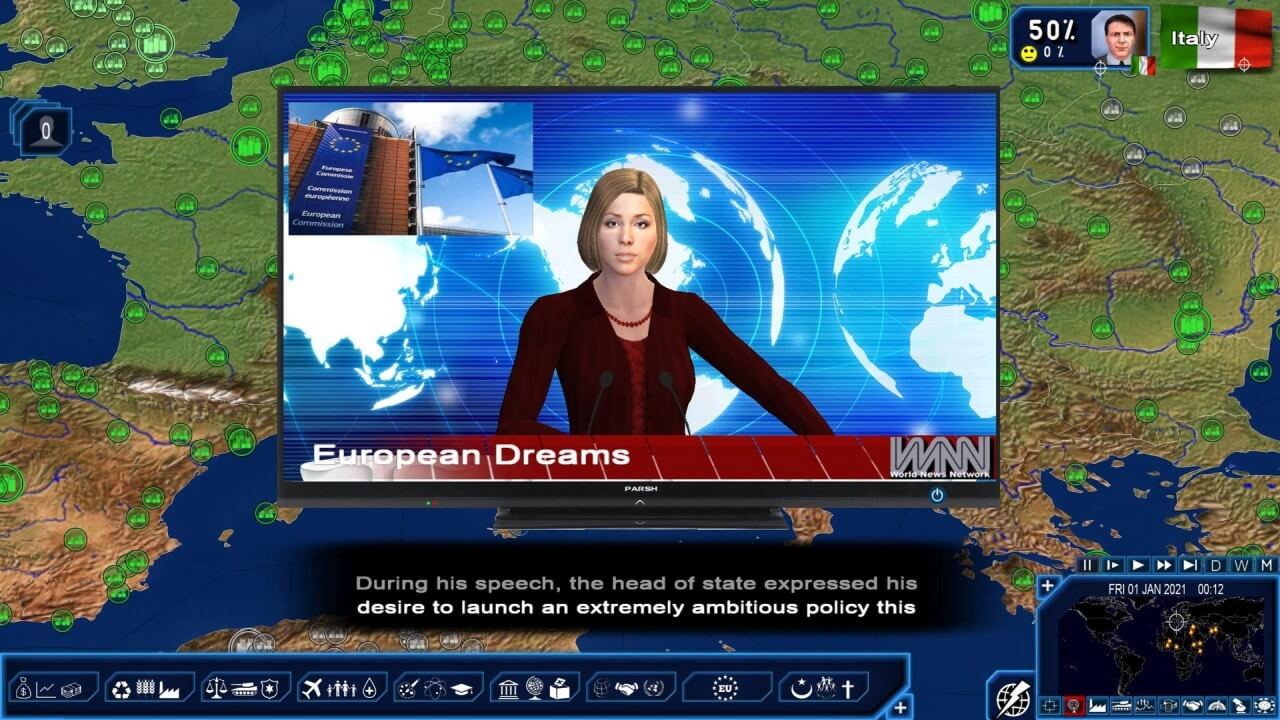 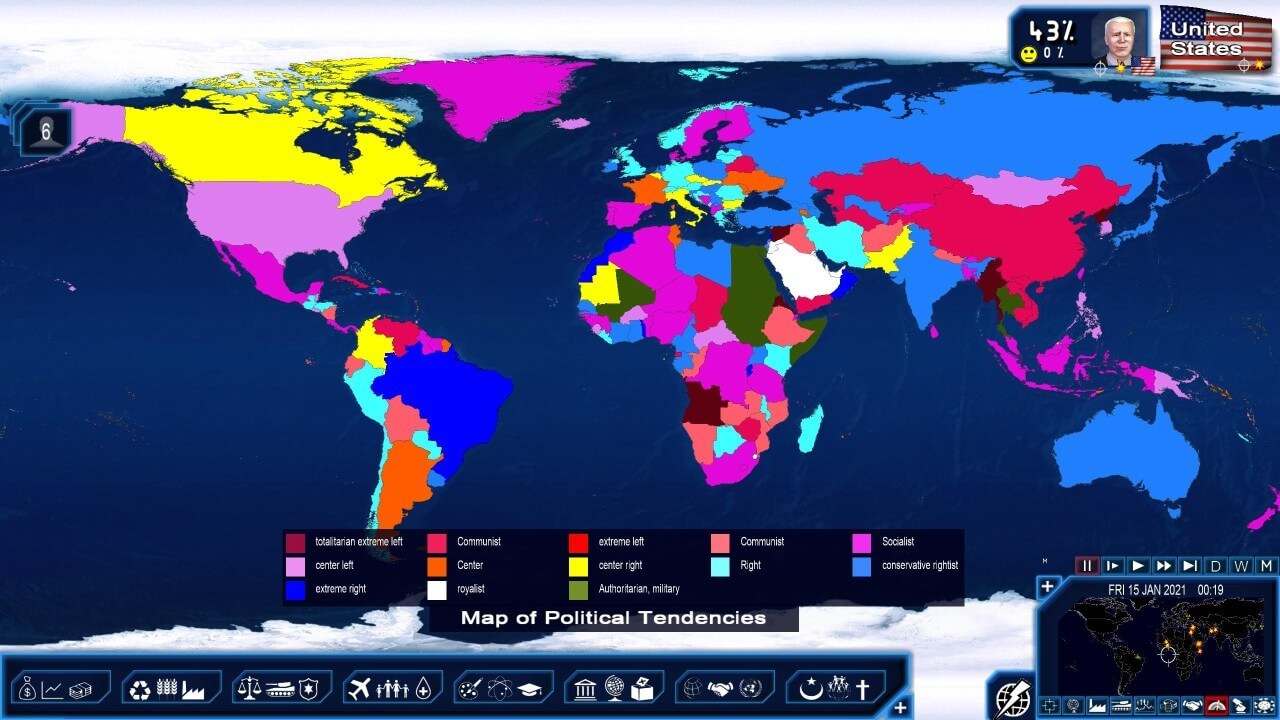 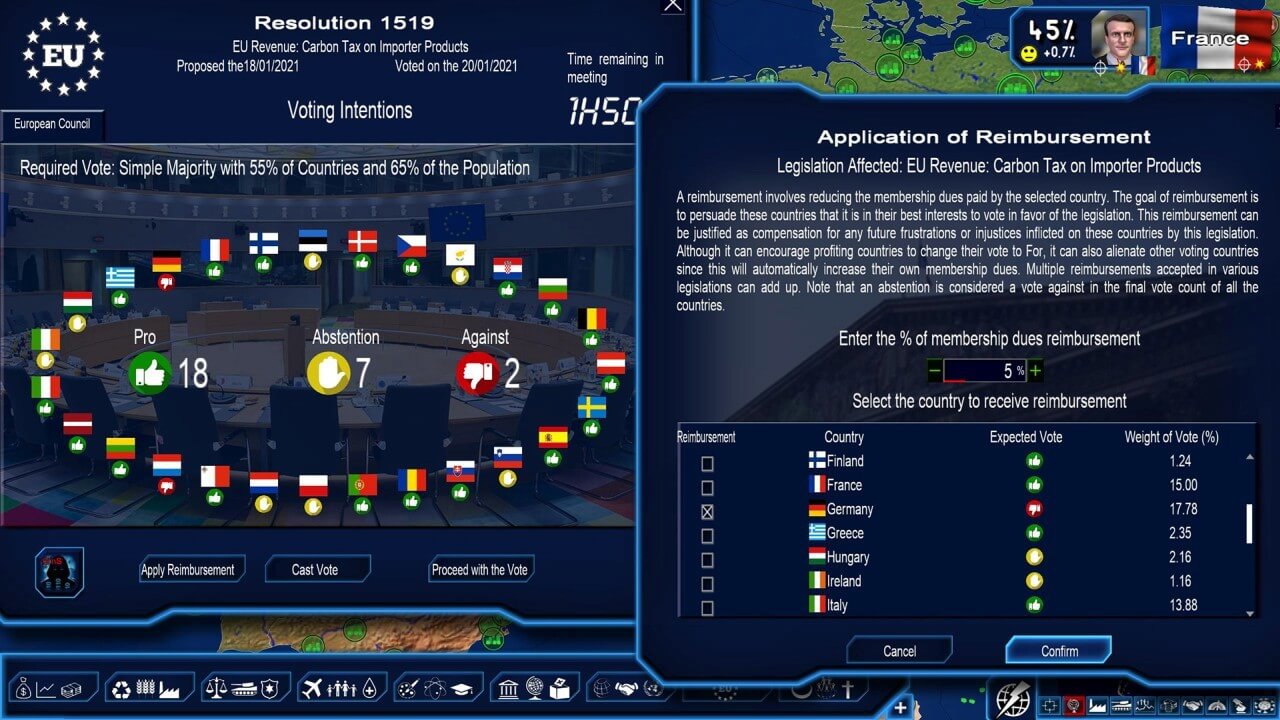 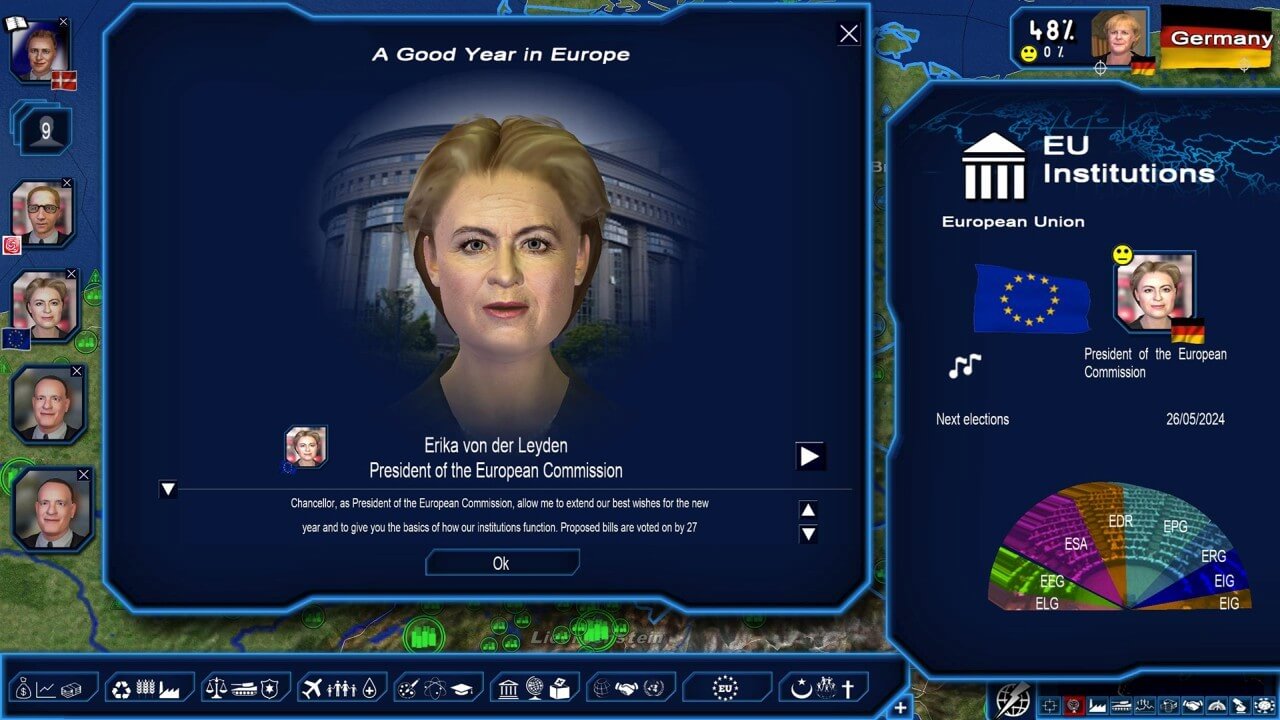 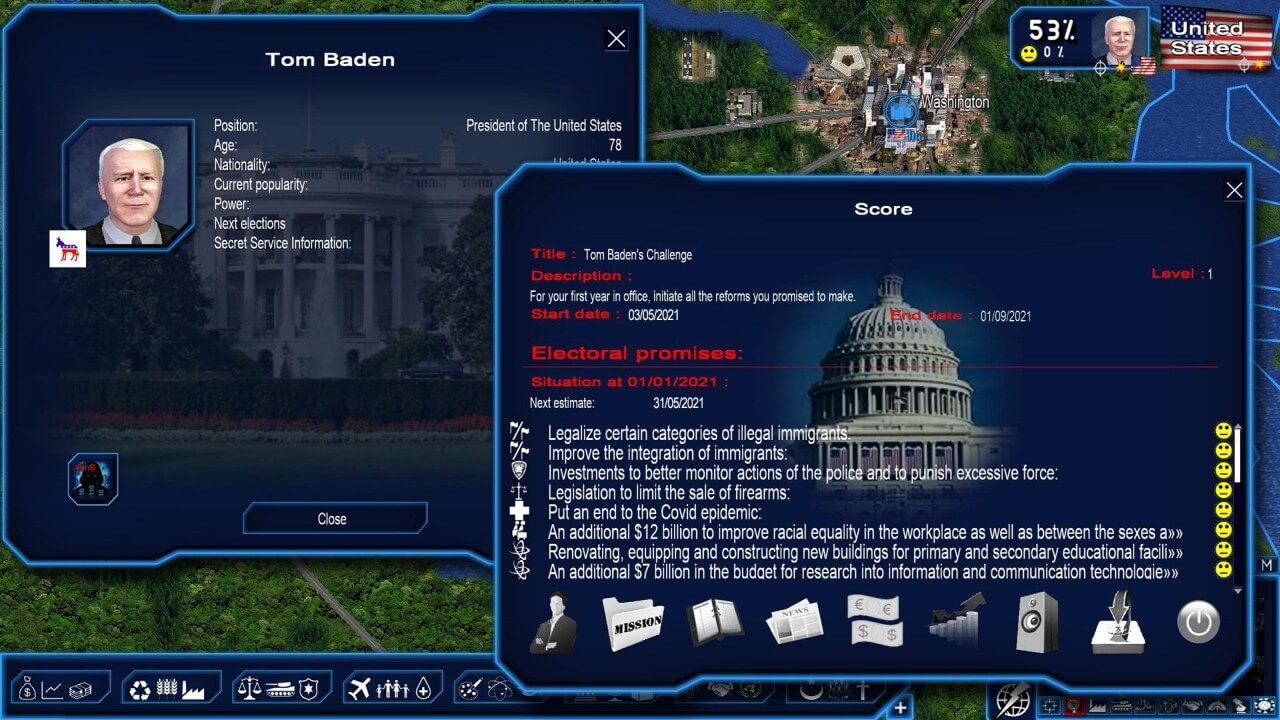 NOTICE: This upgrade only runs for owners of a valid and activated activation code of Power & Revolution 2020 Edition.

In Power & Revolution 2021 Edition, play as the Head of State and extend your influence around the globe. By playing as several countries, try to change the destiny of our planet with orchestrated actions. Play as the head of the legal or illegal opposition and seize power!
New Features for 2021: administration of the EU, Covid vaccinations, Biden's Challenge, political coalitions, diplomatic negotiations, worldwide tax and free-trade agreements.

Power & Revolution 2021, is a simulation of our current world, recreating its features in-depth and across a number of domains: economic, political, military, social, financial, environmental, energetic, transportation... All countries of the world are represented with their own features. The calculation and scenario engines include more than 100,000 data, 15,000 texts and 10 hours of recorded dialogue. A detailed and animated 3D world map helps to support the players, with all the borders, regions and important and strategic locations of the world.

2021: A YEAR OF CHALLENGES!
In 2020, the pandemic flattened economies, sent debt through the roof and increased economic insecurity. But at the beginning of 2021, hope was reborn with the arrival of vaccines against Covid-19: the end of the health crisis and the return of growth are on the horizon and with the inauguration of the new American president, a new era of diplomacy has also begun. As head of one or several nations, win the battle against the virus by carrying out a vaccination campaign, revitalize your economy and move your pawns on the political chessboard with new strategies: the creation of party coalitions, negotiations during meetings of heads of state, free-trade agreements, worldwide taxes, diplomatic initiatives (scientific cooperation, student exchanges, year of culture)...
In a vast, highly realistic simulation of the European Union, there are many political conundrum to solve if you want to develop the organization: voting and institutional operation rules, detailed budgets, new taxes, fiscal or social harmonization, commercial agreements… And there are other challenges to face: in "Biden's Challenge", try to reach your ambitious goals as the new American head of state; participate in the German federal elections and if you win, try to form a coalition to govern the country; and with the new worldwide fatality management system, take action to reduce their impact and limit the number of deaths.
A TOTALLY UNIQUE SIMULATION ENGINE

SIMULATIONS OF MAJOR GLOBAL THREATS
The Geopolitical Simulator 2021 Edition simulates all the major perils that threaten the planet and produces a comprehensive assessment for each one from the results along with specific graphics. The list of threats is substantial and many of them are interconnected: global warming, the widening of social inequality, the risk of global atomic war, overpopulation, unemployment, atmospheric pollution, terrorism, cybercrime, regional conflicts, food insecurity, world hunger, deforestation, natural disasters (storms, floods, drought, extreme heat...), rising sea levels, ocean acidity, disappearance of animal species, climate refugees, epidemics, endocrine-disrupting chemicals…
PLAY AS THE OPPOSITION
At the head of a legal or illegal organization, the player can take power by force, revolution, diplomacy, or democratic election. To that end, players have many actions at their disposal: manage the budget of the party or illegal organization, intervention in the media, give voting advice to Parliament, launch protest movements, lobbying, manipulation of influential persons, funding or recruitment campaigns, creation of violent cells, purchase military equipment, raise an army, seek allies, engage in armed conflict... During elections, players must manage their campaign budget, establish their political agenda, complete their meeting itinerary, confront their adversary in televised debates…
AI CONTROLLED LOBBYISTS AND CHARACTERS
All actions of the player as head of state or opposition have repercussions and lobbies, social groups, and important national and international figures will intervene if their artificial intelligence deems necessary (press interviews, resignations, protests, strikes, unrest, blocked roads, wars...). To prevent tensions or forge alliances, the player can meet any figure during the meeting or intervene in the media (more than 10 hours of dialogue in the game).
REALISTIC WARGAMES AND CITY BATTLE PHASES

Simulation of the European Union
The complex operation of the European Union has been incorporated to simulate the cogs in the machine and to allow its development: roles of the executive and legislative, detailed spending and revenue budgets, system of country membership dues, aid payments, economic break-down and ranking of all regions of the member countries, holding elections in Europe... The player can propose resolutions within all areas of responsibility in the EU, especially the rules of social and fiscal harmonization between member countries, but they will have to be particularly shrewd and convincing because decisions are made collectively among the nations with sometimes conflicting objectives. In which case, modifying the voting rules will prove particularly interesting. The player can also redistribute the annual aid they receive from the EU to try to maximize these subsidies. Scenarios pertaining to the EU are included: "The Beijing-Berlin Silk Road", "Enlarging the Union" and "The EU, the Leading World Power and Global Democracy".
Biden’s Challenge
As head of the USA, the player must keep all the promises made during the electoral campaign and during the State of the Union Address, more than twenty goals to meet. They mainly cover fiscal policy, massive investments in infrastructure, development of clean energies, ending the health crisis and reducing inequality and discrimination. But tensions in the American population threaten to reemerge, especially with a program that greatly offends the most radical fringes of the conservative opposition...
Covid-19 Pandemic
The world is not finished with the virus. All data has been updated as of the beginning of 2021 and the player must run a vaccination campaign and put an end to the health crisis. In addition to all the types of confinement that already exist, the player can set vaccination priorities along with health and vaccination policies (vaccination passport...).
Simulation of fatalities
Real fatality data for every country of the world has been integrated into the game. Nearly thirty causes of death are simulated (cancers, stroke, malnutrition, diabetes, heart disease, traffic accidents...) and the player can act to reduce these occurrences.
Creation of political coalitions
The players can run an electoral campaign or lead a country by allying with other political parties. To do this, you will have to create a common program and commit to allocating governmental posts.
Meetings of heads of state
The player can negotiate directly with various independent members, playing on the influences they have on each other and try to change the outcome of the vote that is displayed on the screen. At meetings of the European Union, you can offer reimbursements on membership dues.
Free-trade agreements
Various type of agreements can be proposed. Depending on the economic, political or environmental impact, this will enable you to develop various volumes of trade between countries or the European Union and thus promote economic growth.
New diplomatic initiatives
Countries can collaborate and improve relations by implementing student exchanges program, a year of culture dedicated to a host nation, transnational highway construction, scientific cooperation aimed at making discoveries and sharing them by pooling scientific knowledge and financial means.
New real-world situations
German elections: as a candidate in the German federal elections, the player can aspire to succeed the German Chancellor after sixteen years in power. But real-life polls included in the game demonstrate that obtaining a majority in the Bundestag seems impossible by one single party. The creation of a political coalition will be one of the obstacles to overcome in order to govern the country. Worldwide tax on multinationals: as the American head of state, the player can try to impose worldwide fiscal reform on the largest multinational companies, limiting tax havens and strengthening national finances which is very significant in this time of crisis; but negotiations at the G20 may prove to be difficult.
The "World Without Covid" scenario is back in 2021 and allows a "normal" backdrop, without the pandemic.