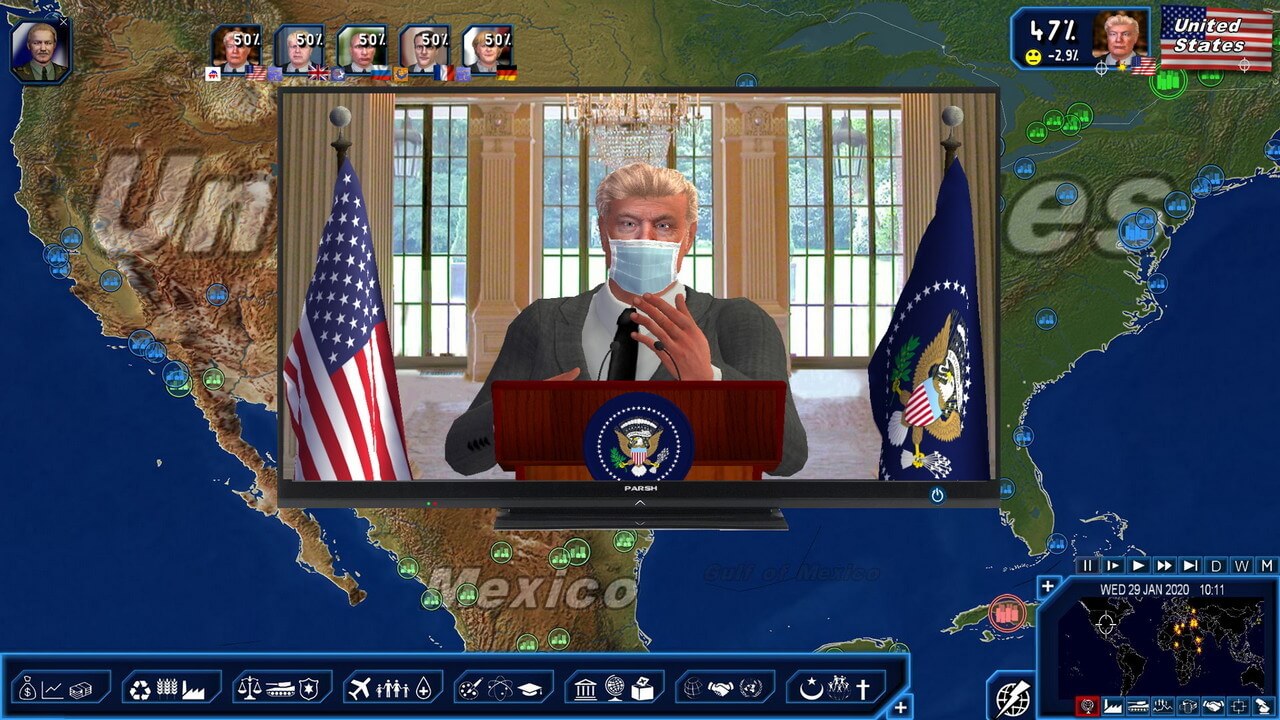 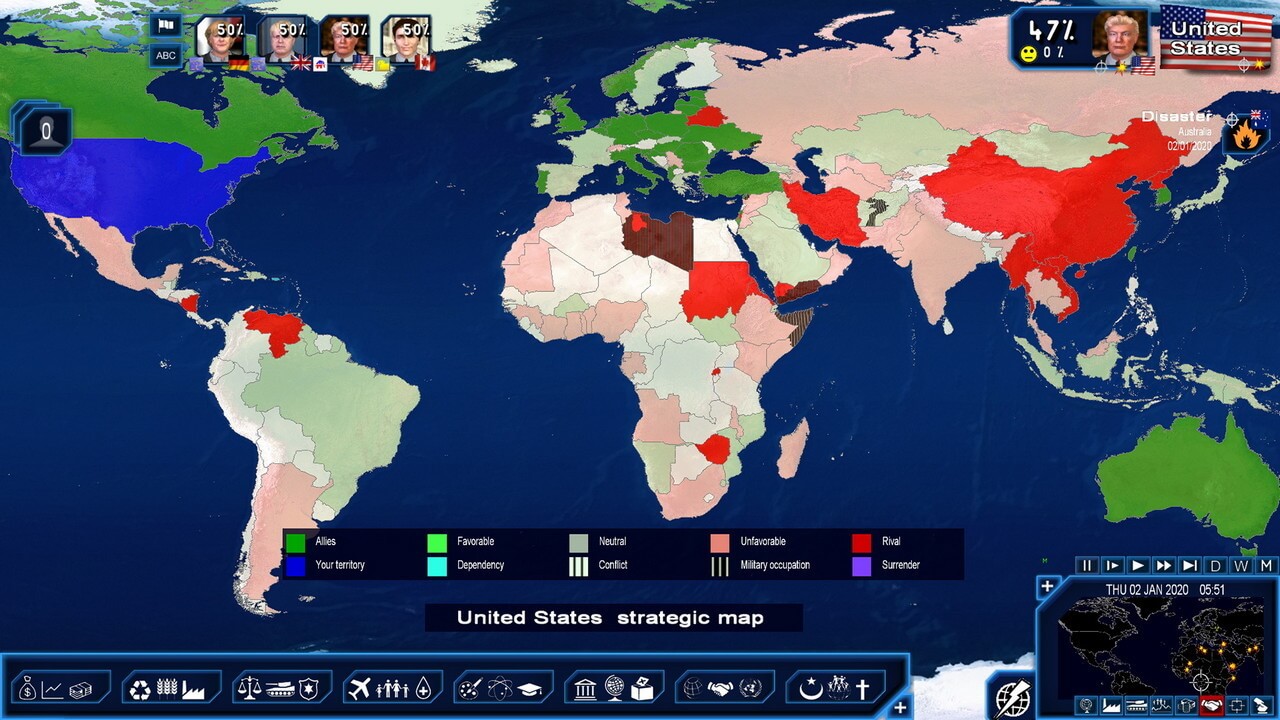 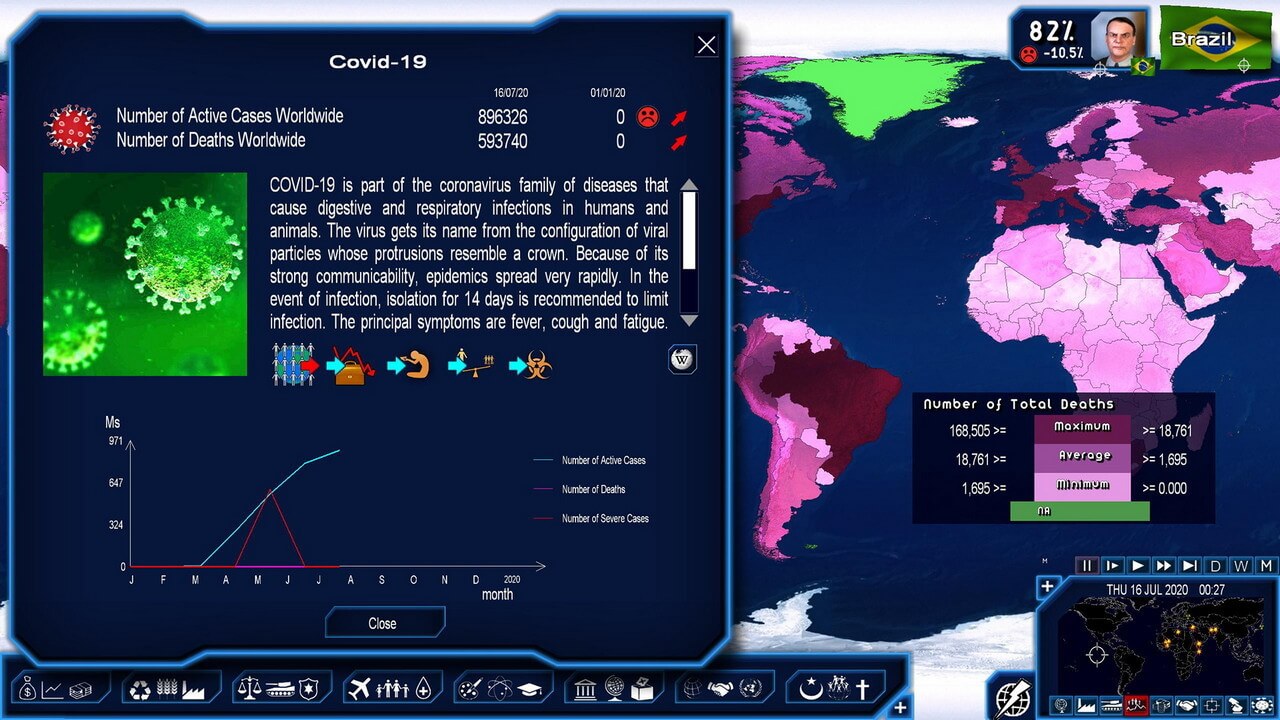 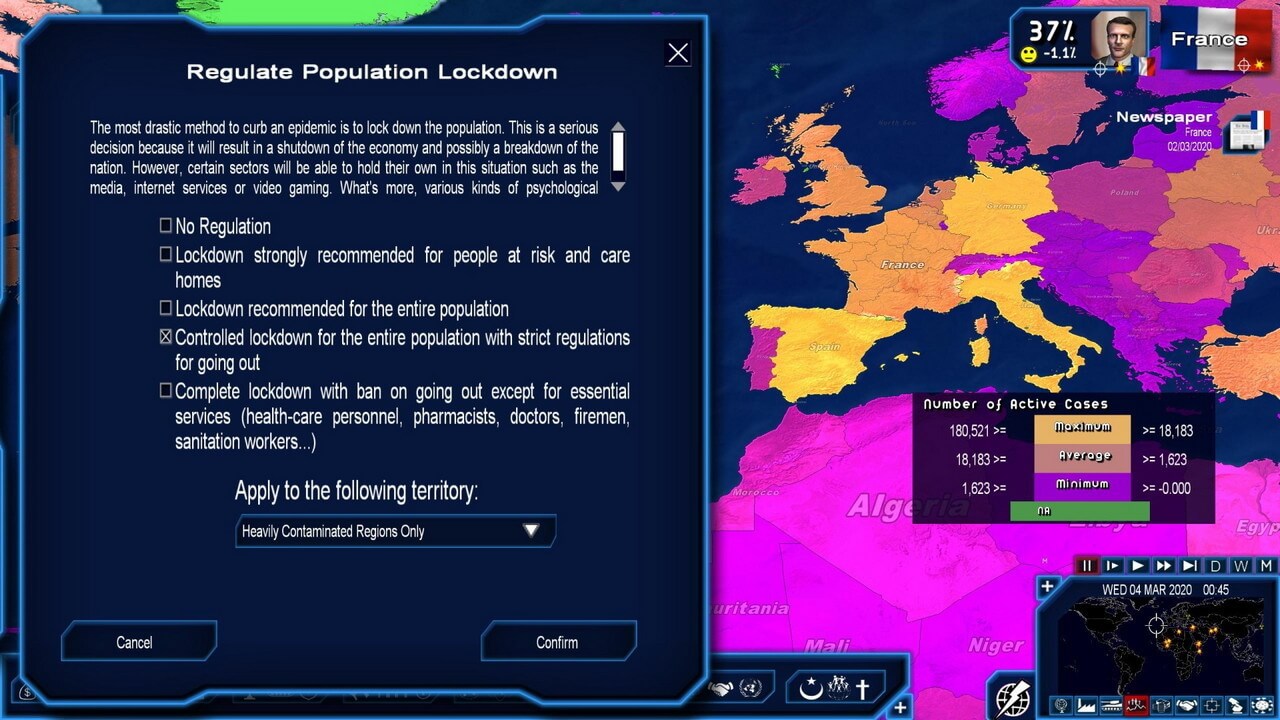 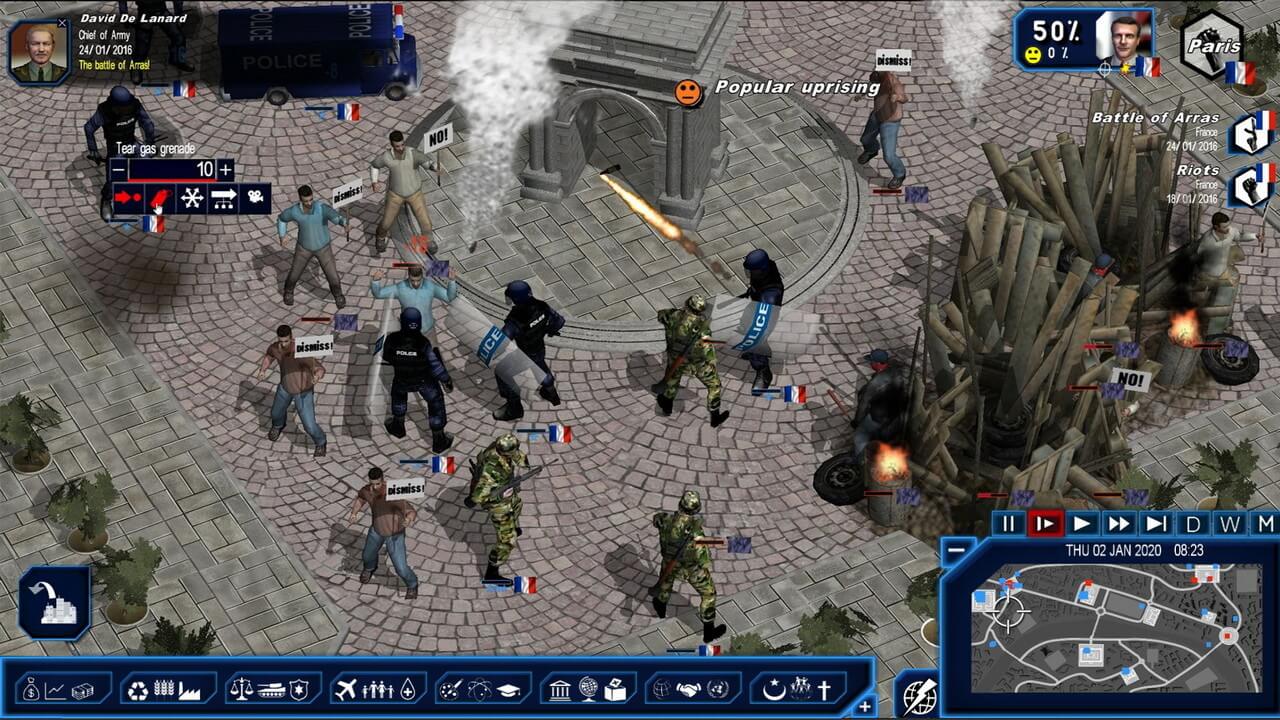 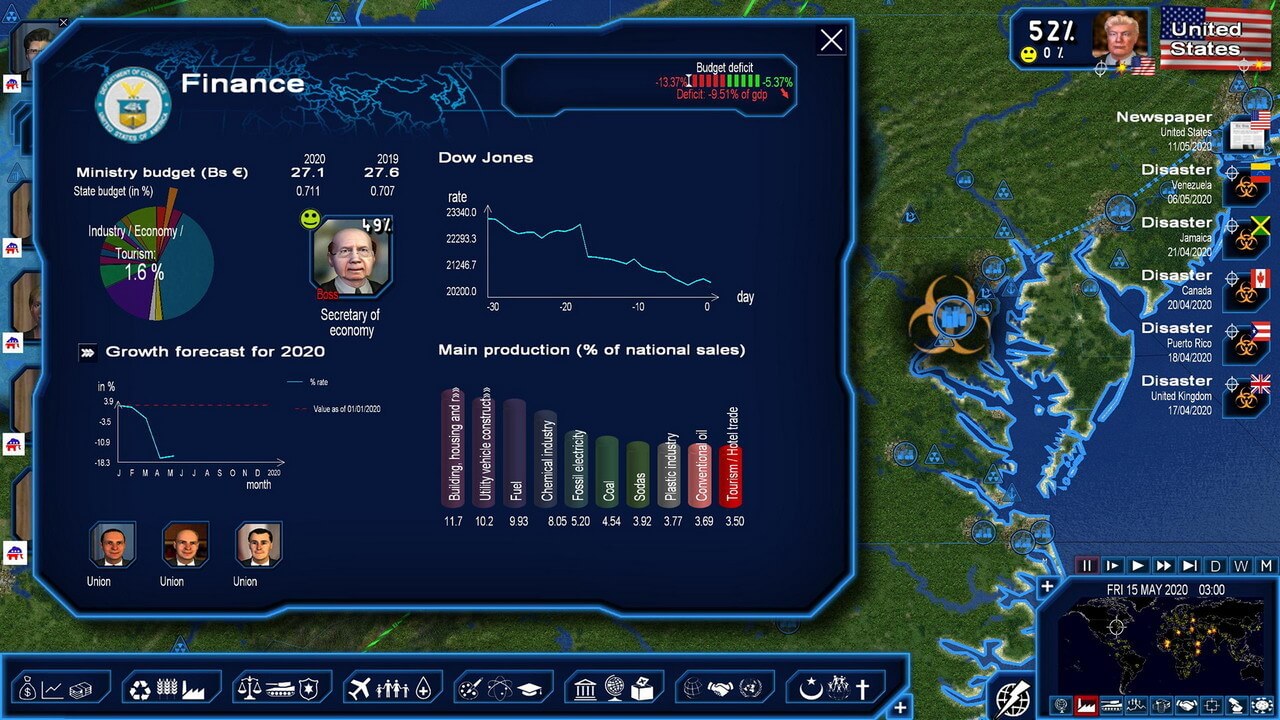 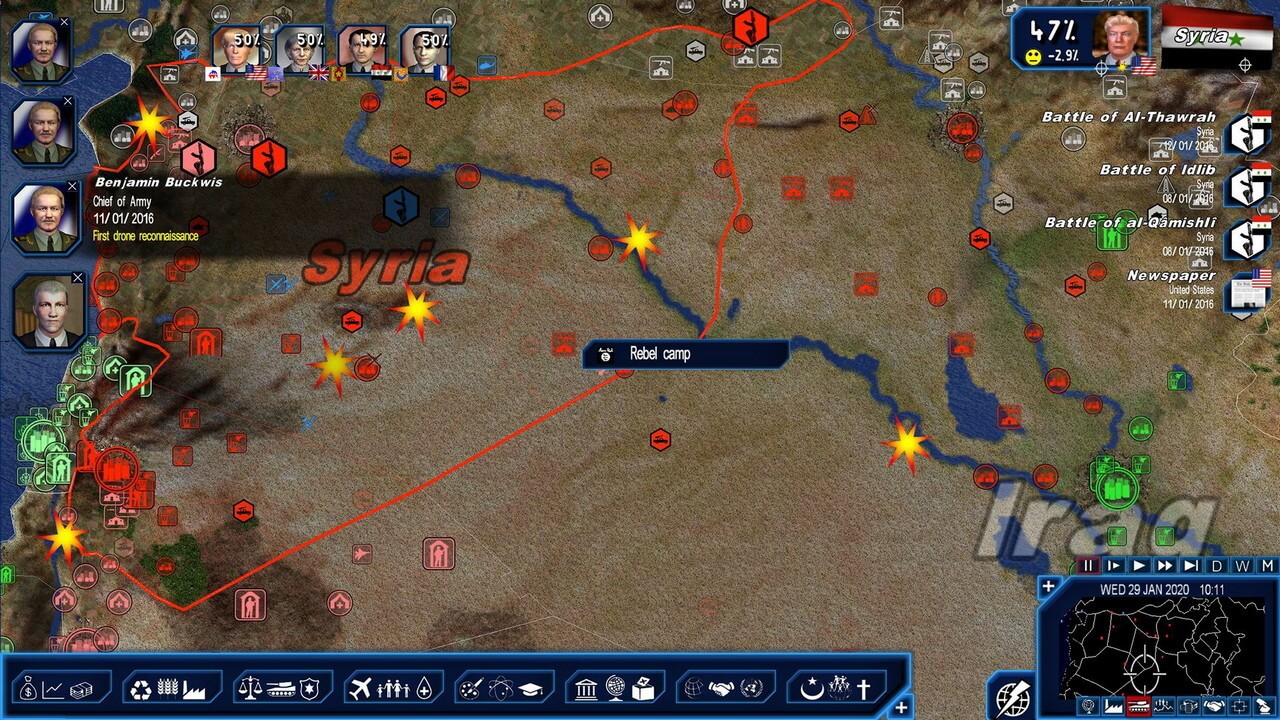 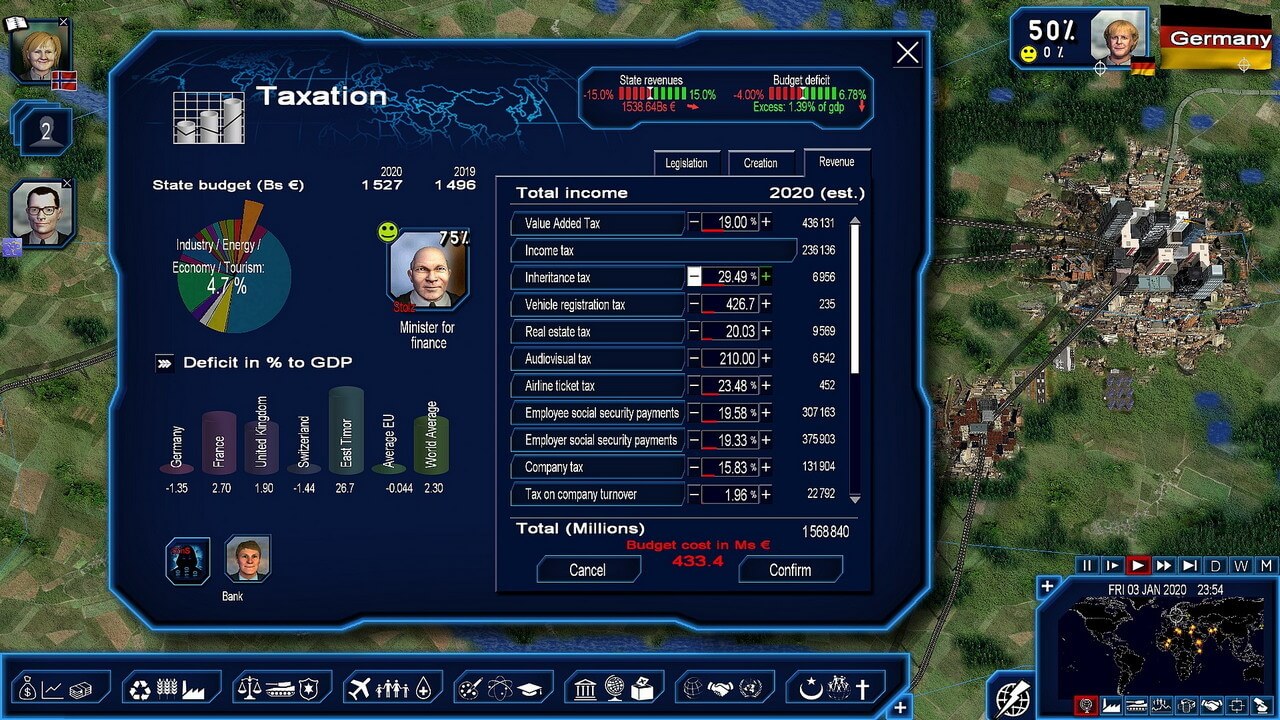 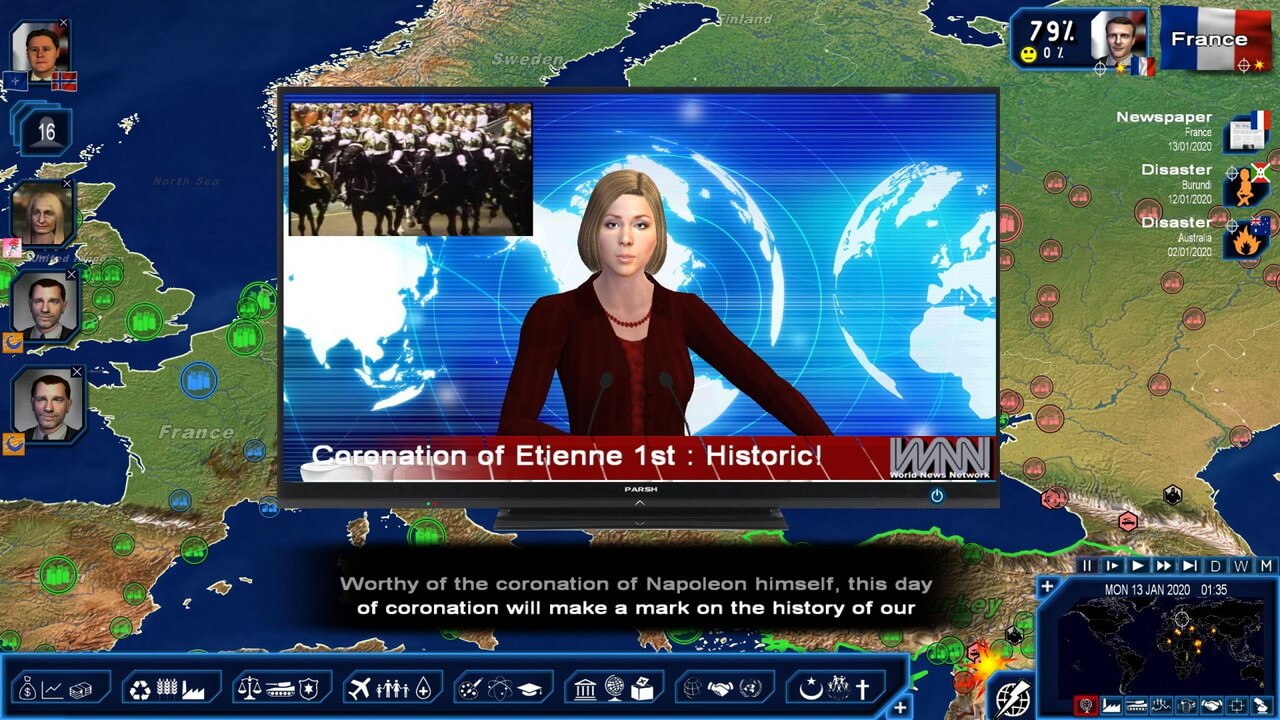 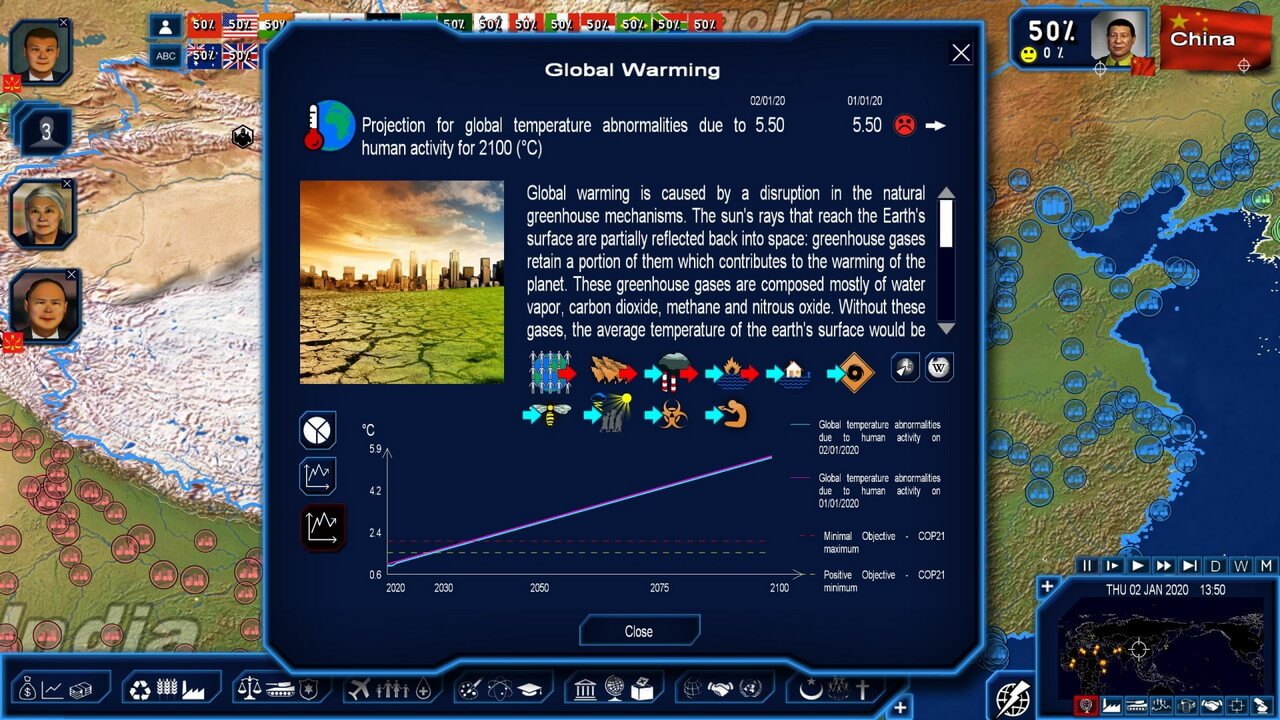 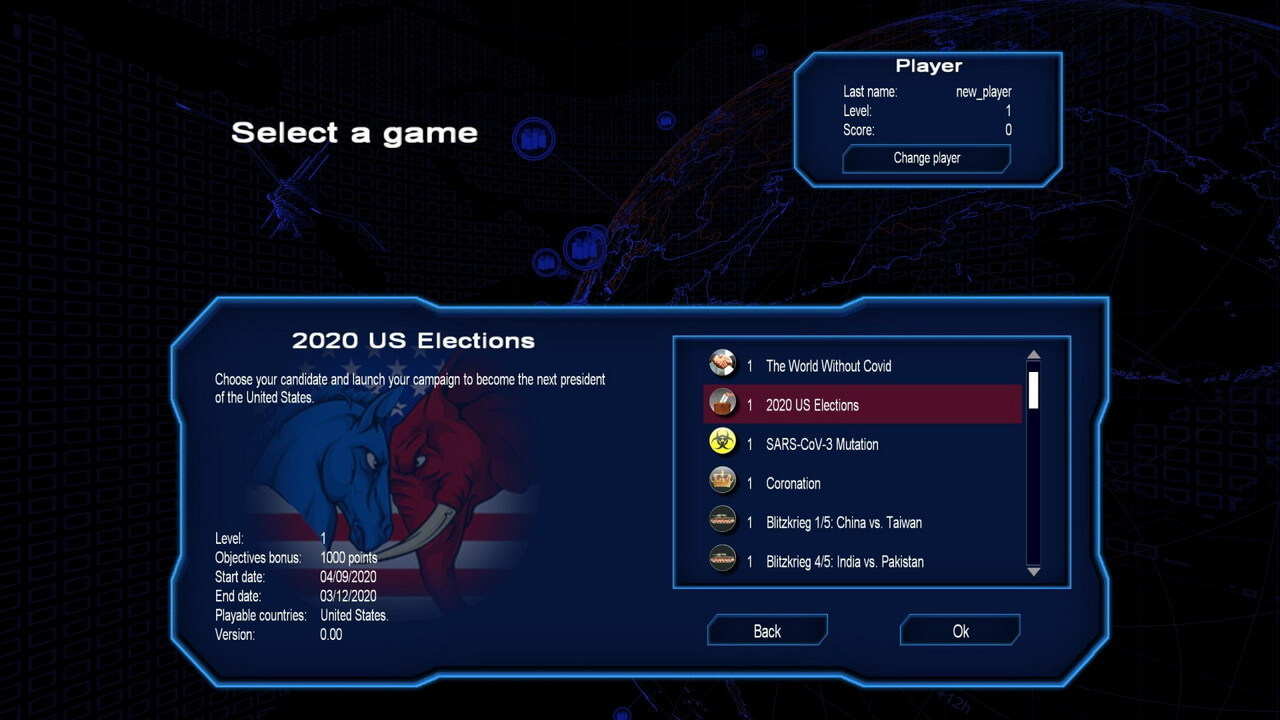 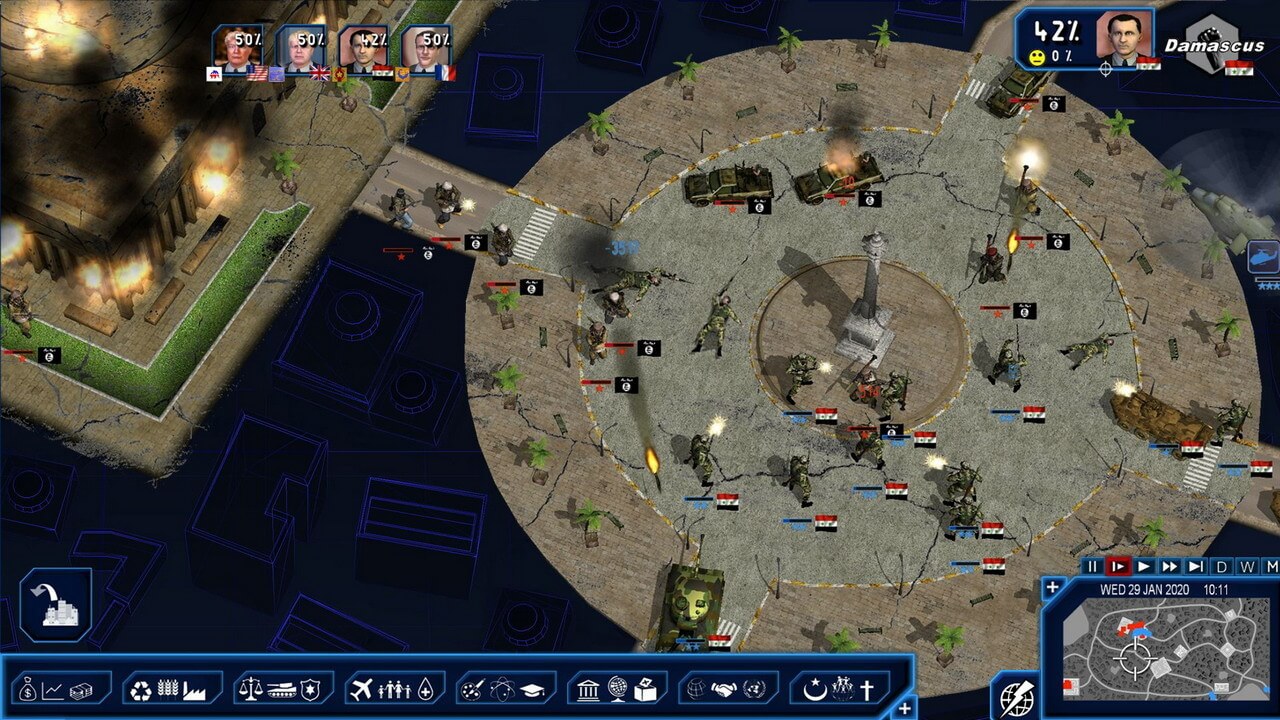 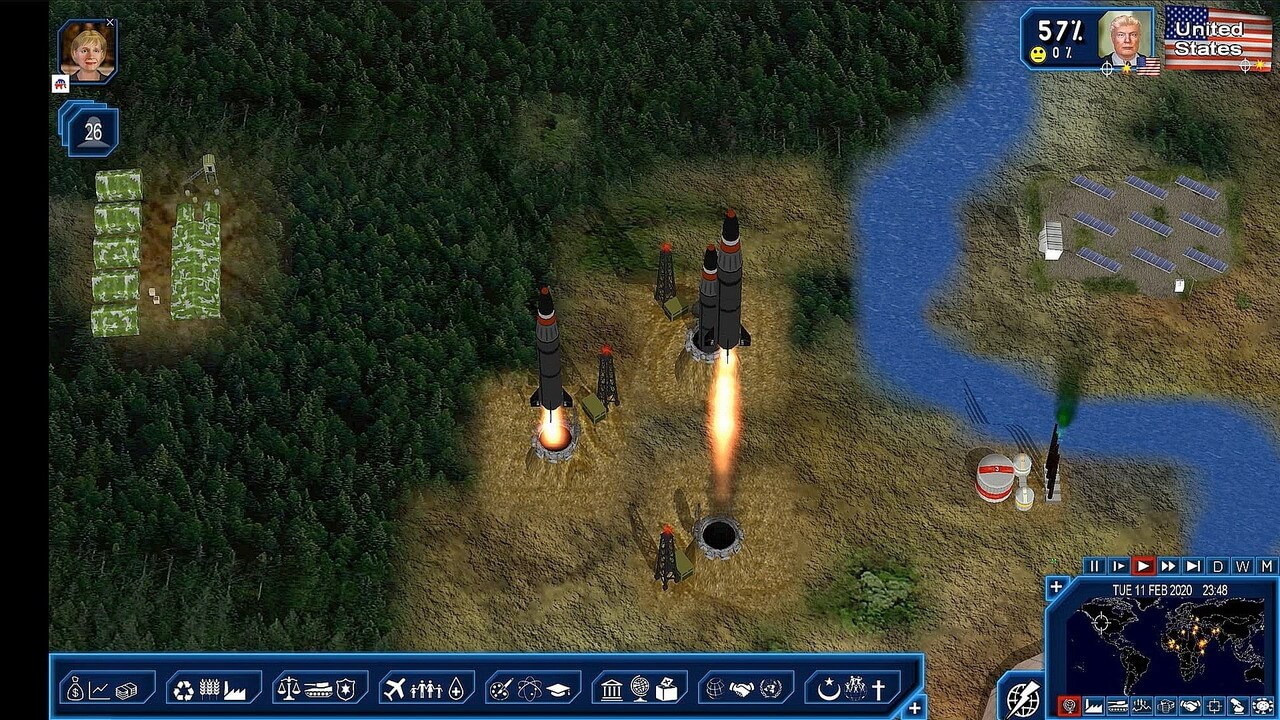 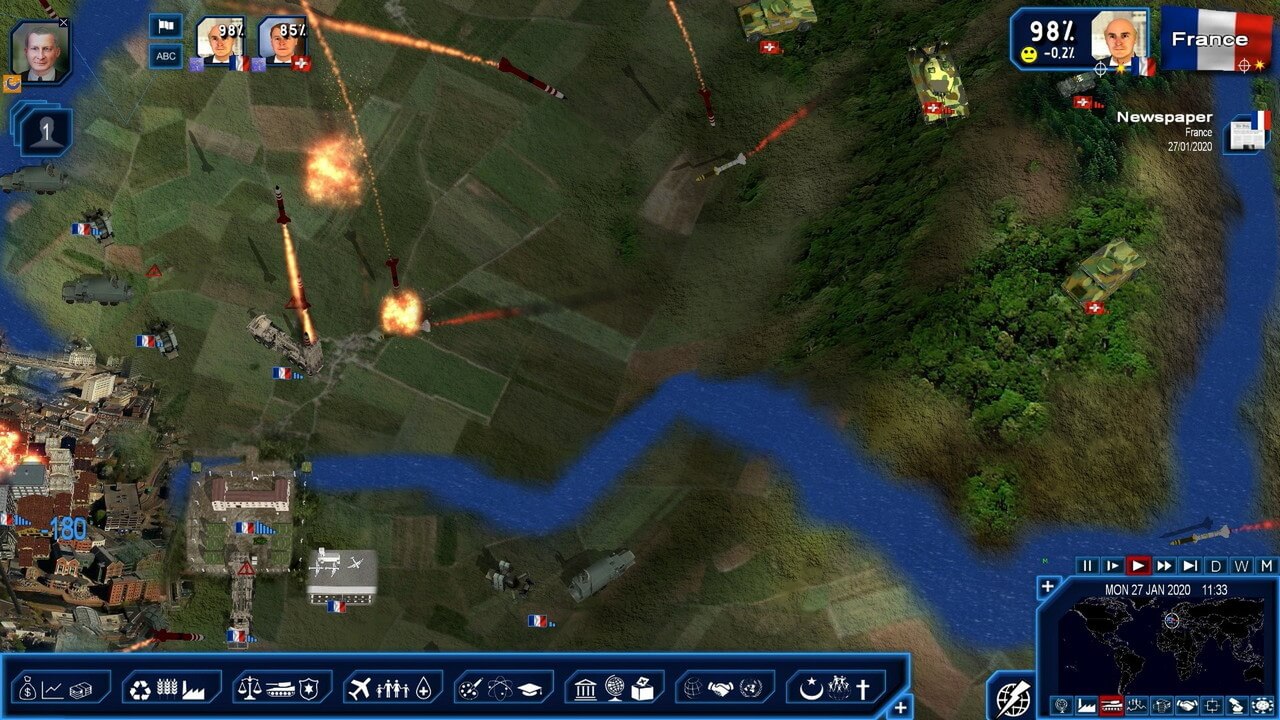 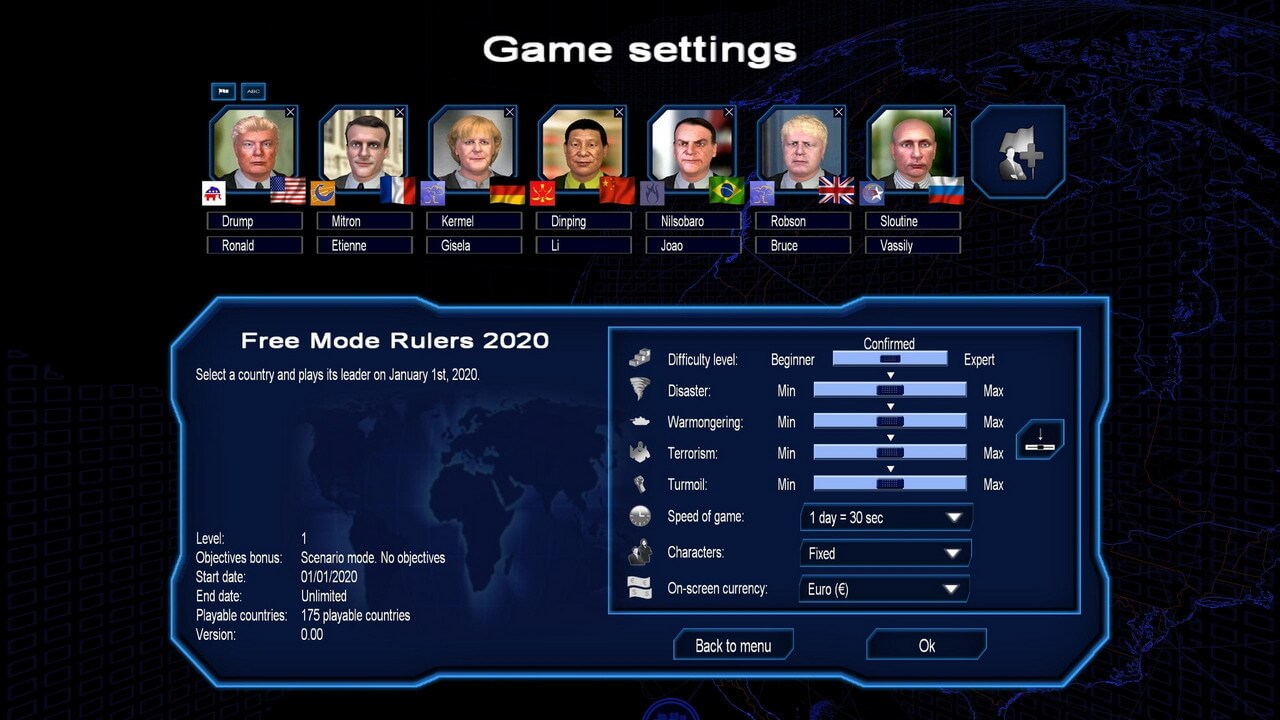 The new version of Geopolitical Simulator 4, the ultrarealistic simulator of today's world where you play as the head of state or as the opposition! Stop the spread of the Covid-19 pandemic and restart the economy, participate in the US elections or engage in lightning wars with new 2020 scenarios.

In Power & Revolution 2020 Edition, play as the Head of State and extend your influence around the globe. By playing as several countries, try to change the destiny of our planet with orchestrated actions. Play as the head of the legal or illegal opposition and seize power! With the new scenarios in Power & Revolution 2020 Edition, try to contain the Covid-19 pandemic and revive economic activity, participate in the 2020 US presidential election or engage in lightning wars to add conquered territory.

Power & Revolution 2020, is a simulation of our current world, recreating its features in-depth and across a number of domains: economic, political, military, social, financial, environmental, energetic, transportation... All countries of the world are represented with their own features. The calculation and scenario engines include more than 100,000 data, 15,000 texts and 10 hours of recorded dialogue. A detailed and animated 3D world map helps to support the players, with all the borders, regions and important and strategic locations of the world.

2020: A TURBULENT YEAR!
As the year 2020 begins, the Covid-19 is spreading... As the head of one or several nations, take up the greatest challenge of the human race since the Second World War as you try to contain this health crisis and its economic impact. This game also offers multiple scenarios: a simulation of the world without the Covid-19 pandemic, a glimpse of a future with the emergence of an even more dangerous virus, participation in the 2020 US presidential election, the transformation of the player’s political system into an absolute monarchy, and various ongoing conflicts which showcase the new wargame functions (formation of squads, missile silos, anti-aircraft batteries...).
A TOTALLY UNIQUE SIMULATION ENGINE

SIMULATIONS OF MAJOR GLOBAL THREATS
The Geopolitical Simulator 2020 Edition simulates all the major perils that threaten the planet and produces a comprehensive assessment for each one from the results along with specific graphics. The list of threats is substantial and many of them are interconnected: global warming, the widening of social inequality, the risk of global atomic war, overpopulation, unemployment, atmospheric pollution, terrorism, cybercrime, regional conflicts, food insecurity, world hunger, deforestation, natural disasters (storms, floods, drought, extreme heat...), rising sea levels, ocean acidity, disappearance of animal species, climate refugees, epidemics, endocrine-disrupting chemicals…
PLAY AS THE OPPOSITION
At the head of a legal or illegal organization, the player can take power by force, revolution, diplomacy, or democratic election. To that end, players have many actions at their disposal: manage the budget of the party or illegal organization, intervention in the media, give voting advice to Parliament, launch protest movements, lobbying, manipulation of influential persons, funding or recruitment campaigns, creation of violent cells, purchase military equipment, raise an army, seek allies, engage in armed conflict... During elections, players must manage their campaign budget, establish their political agenda, complete their meeting itinerary, confront their adversary in televised debates…
AI CONTROLLED LOBBYISTS AND CHARACTERS
All actions of the player as head of state or opposition have repercussions and lobbies, social groups, and important national and international figures will intervene if their artificial intelligence deems necessary (press interviews, resignations, protests, strikes, unrest, blocked roads, wars...). To prevent tensions or forge alliances, the player can meet any figure during the meeting or intervene in the media (more than 10 hours of dialogue in the game).
REALISTIC WARGAMES AND CITY BATTLE PHASES