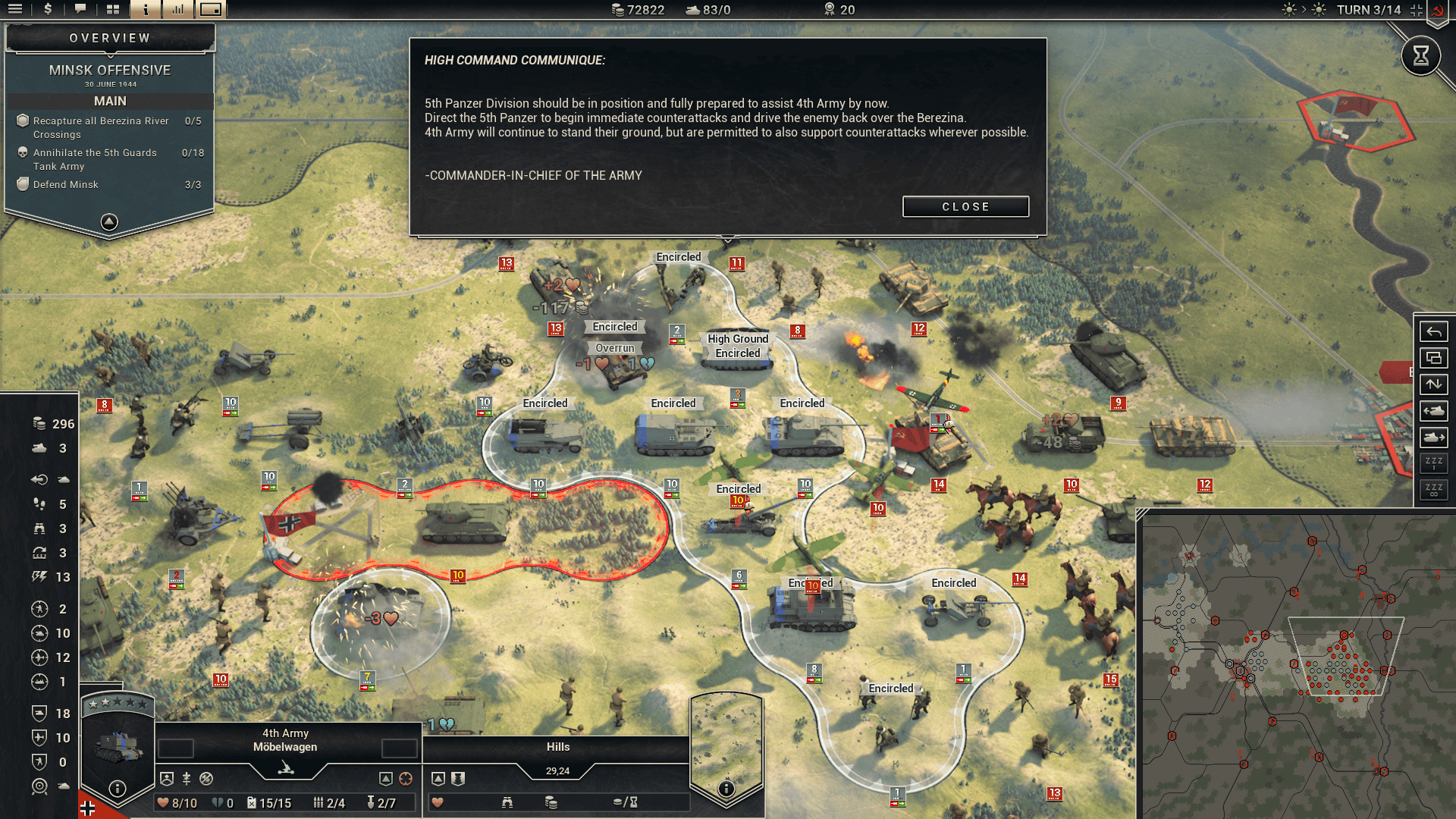 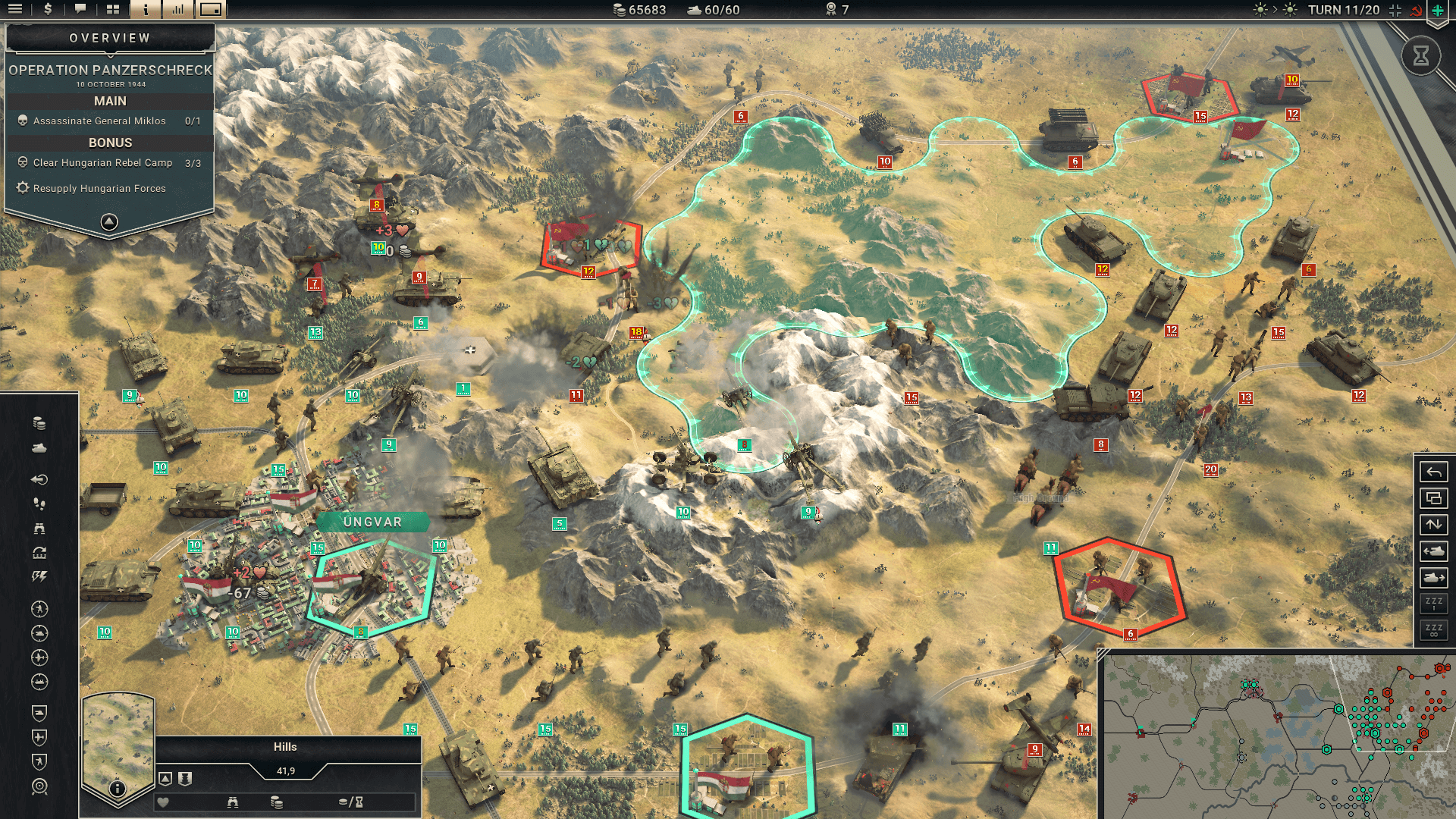 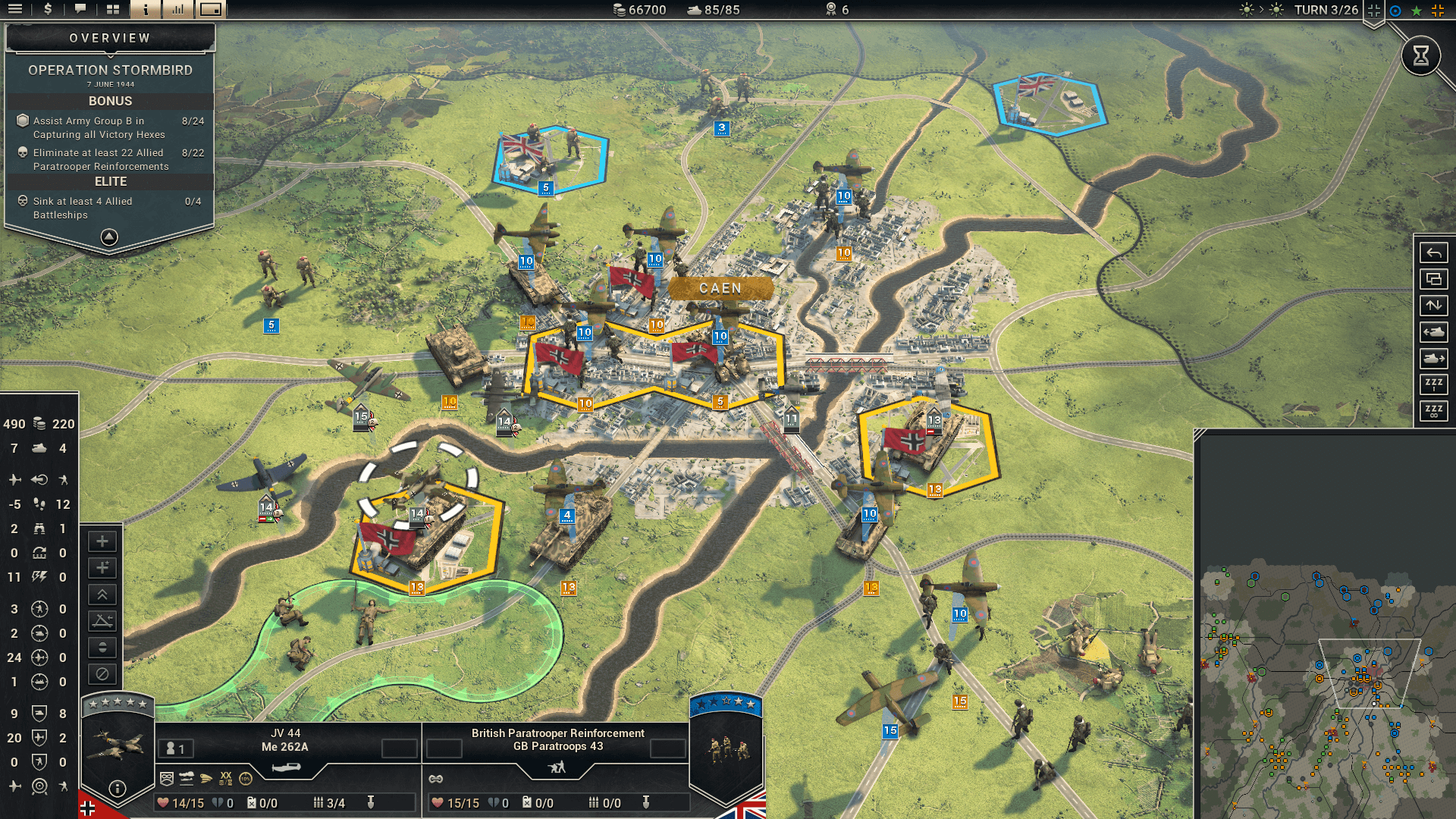 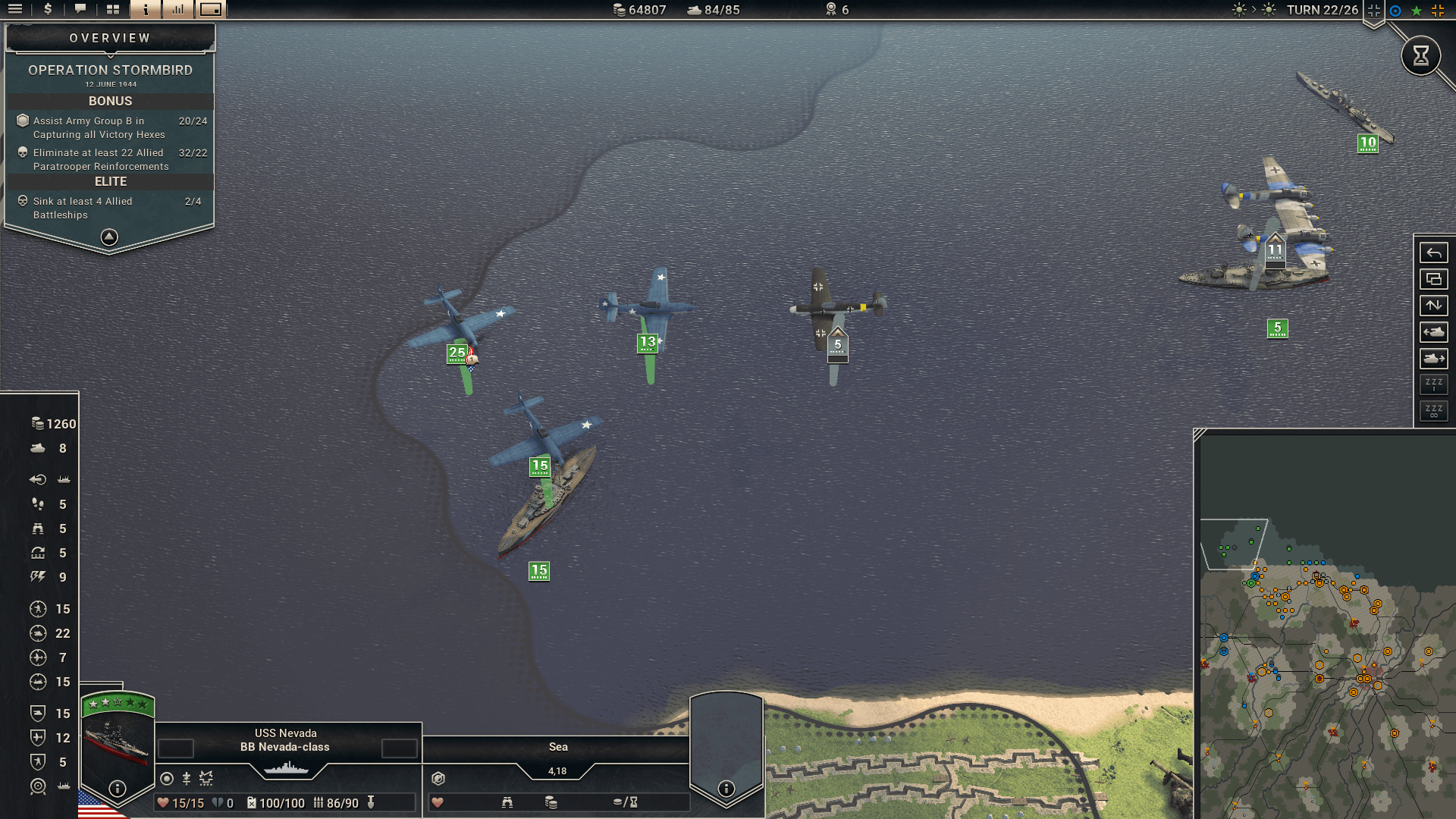 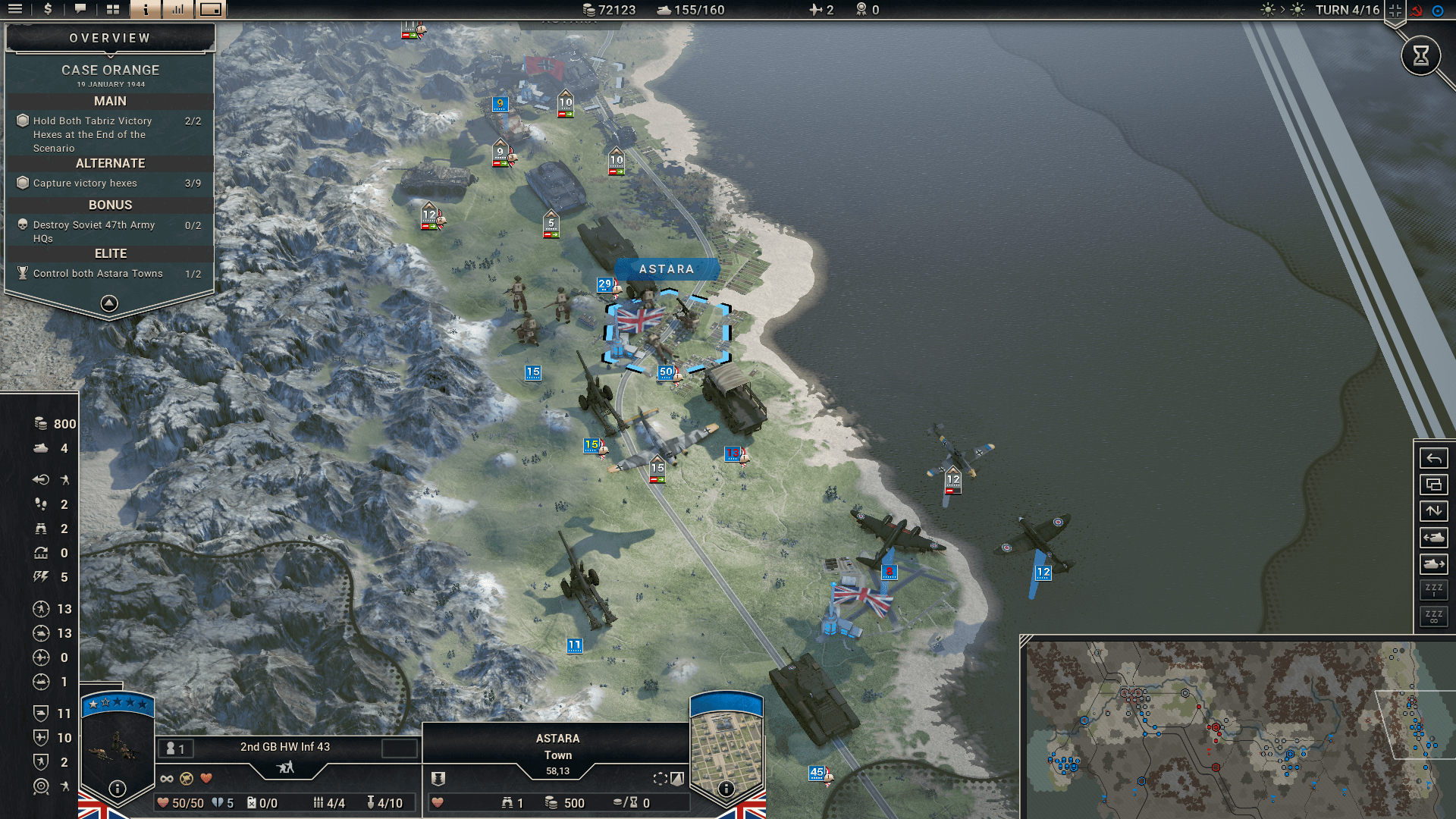 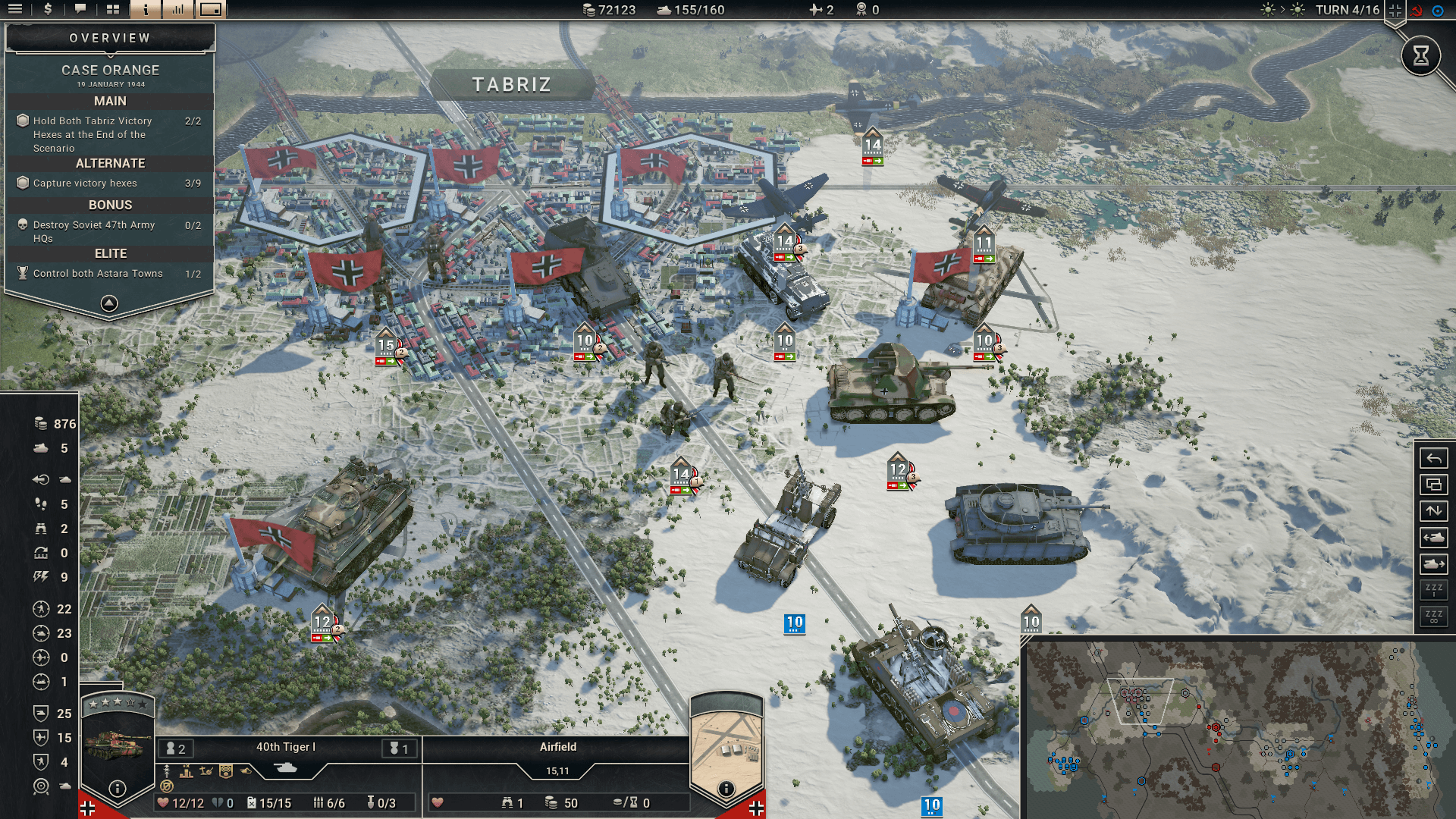 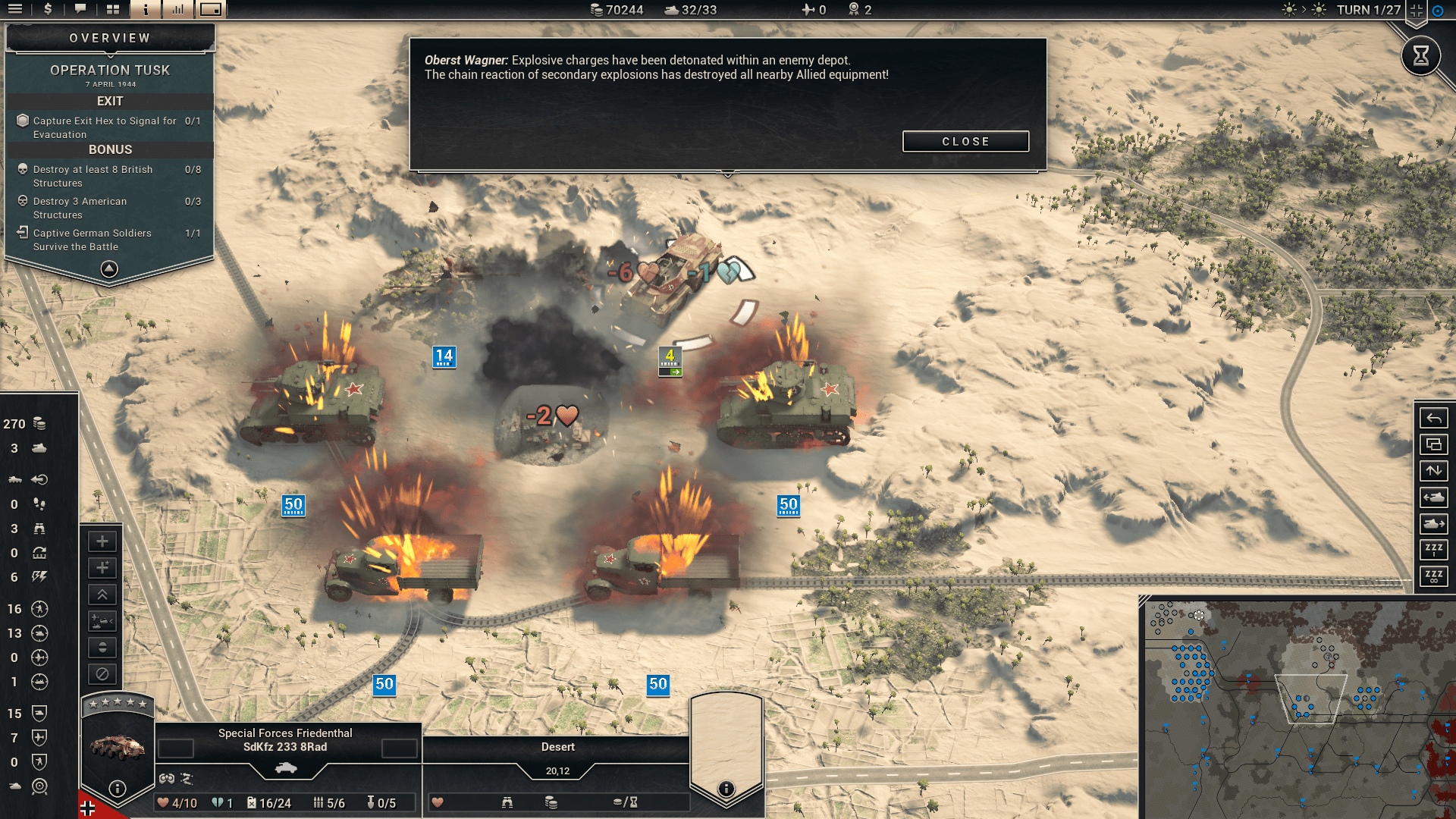 The war on the Eastern Front has reached fever pitch. Wehrmacht forces across the Eastern Front find themselves under immense pressure from a resurgent Red Army. Caught between directives to maintain full control of the vast territories they have conquered and the desperate struggle to survive against increasingly strengthening Soviet armies, German forces are stretched to their limits.

But an inevitable Axis decline is not the only path that lies before you in this Panzer Corps 2 Campaign DLC!

The Axis Operations 1944 DLC Campaign is the first DLC to offer two entire campaigns that are completely separate and independent from one another.

In the historical campaign, prepare to face the brutal realities of the decline of the German Wehrmacht as it struggles to survive the Allied onslaught battering it from all directions.

In the ahistorical campaign, continue your success that has secured the Caucasus region for Germany as you defend your extensive conquests from both familiar and also totally new challenges.

To give players the most freedom of choice, both campaigns are immediately available for all players to begin. There are no prerequisites or barriers to launching either campaign. Newly formed Panzer Corps or deeply imported forces have equal choice in which campaign path to pursue and explore.

For veteran campaigners with a force ready to import into this latest DLC, it is recommended to continue with your Historical or Ahistorical campaign paths to fully experience the content’s extensive narratives.

A TALE OF TWO CAMPAIGNS

To properly explore both the historical battles and ahistorical events taking place in the 1944 DLC, Axis Operations 1944 has grown to provide the largest amount of content a DLC has yet to have. A The huge 20 scenario count offers the best glimpse at exploring the historical realities of devastating battles fought on the Eastern Front during 1944, especially during Operation Bagration. Such a large scenario count also allows for the Ahistorical campaign to continue in a fully developed way that continues right where Axis Operations 1943 left off, and continues to carve a path through uncharted and completely original content unique to Panzer Corps 2.

The ahistorical campaign is no short hop from Allied capital to Allied capital, it is a fully fleshed out and realized campaign with well researched potential successes, and setbacks, the mighty German Wehrmacht may have faced even after it emerged as the victor from the Battle of Kursk.

Standing in your way is a whole new set of objectives, classified as Elite Objectives. These are objectives that only the strongest Panzer Forces should attempt to complete; they are challenges designed to give pause to even the strongest and most deeply of imported forces. Elite objectives also represent and reflect growing Allied superiority that was becoming evident in 1944.

While imported forces can seek additional growth and challenges through increased difficulty settings, advanced game modes, and new elite objectives, the preset force contains a moderate amount of experienced units and an assortment of heroes enough to allow any player to succeed in this new campaign.

Total freedom of choice is on offer in Axis Operations 1944: There are no prerequisites or barriers to launching either campaign. Newly formed Panzer Corps or deeply imported forces have equal choice in which campaign path to pursue and explore.

Again, for veteran campaigners with a force ready to import into this latest DLC, it is recommended to continue with your Historical or Ahistorical campaign paths to fully experience the content’s extensive narratives.

FIGURES AND MISSIONS FROM HISTORY

In addition to the continuing trend of bonus mission objectives inspired by true historical events, this campaign will be supplemented by appearances from additional historical German leaders from World War II. In particular, Axis Operations 1944 dives very deeply into the deeds, and potential fates, of one very prominent figure in the German Wehrmacht. Field Marshal Erwin Rommel returns! But as any student of history knows, the story of this legendary historical figure during 1944 is not one of battlefield glory...

Axis Operations 1944 offers to once again bring these characters to life, as many of their real life memoirs and thoughts influence their mannerisms and writing within the campaign.

By completing bonus objectives and achieving various degrees of victory, you'll earn Commendation Points that can be spent on a variety of unique rewards ranging from access to stockpiles of captured enemy equipment, special prototype tanks, and the chance to recruit more historical officers.

The end of 1944 East is not the end of your campaign though, it is merely the latest step. At the conclusion of Axis Operations 1944 East, players will again be presented with the option to save their core force for use in the next installment of the Axis Operations Campaign.